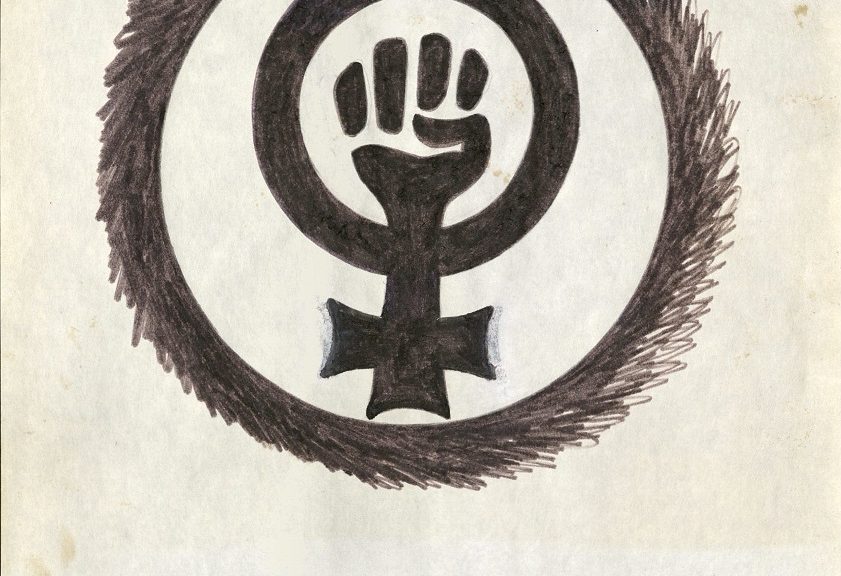 This is the first post in a series entitled Dreamers & Dissenters, in which we will highlight Rubenstein Library collections that document the work of activists and social justice organizations. In this series we hope to lend our voices, and those of the people whose collections we preserve, to the reinvigorated spirit of activism across the United States and beyond.

On Saturday, January 21st, 2017 massive demonstrations took place in over 670 cities in the United States and throughout the world in one of the largest displays of global protest in modern history. A tweet by Kera Lovell about a week before the Marches caught the attention of the Bingham Center. Lovell, an American Studies scholar at Purdue University, drew a connection between a Huffington Post article about the posters being created for the upcoming Women’s March on Washington and the imagery of the women’s movement of the 1960s and 1970s captured in the Sallie Bingham Center’s digital collection, Women’s Liberation Movement Print Culture. The collection includes documentation of the protest of the 1968 Miss America Pageant, the first major U.S. women’s movement protest to attract national media attention. The protest was also the beginning of the woman symbol-with-fist image, which was drawn by co-organizer Robin Morgan for the occasion. Morgan was inspired in part by the Black Power movement’s clenched black fist that emerged in the late 1960s—as well as the Columbia University demonstrations at the same time—suggesting synergies between the movements.

Lovell’s comparison took on even greater significance when Saturday, January 21st arrived, as demonstrations unfolded in every U.S. state and on every continent. A striking pattern emerged in both handmade and professionally printed signs across the globe. The woman symbol-with-fist popped up on signs, shirts, buttons, and more in far-flung marches from Raleigh, NC to Washington, DC to Los Angeles, CA and beyond. Organizations and websites such as CBC/Radio-Canada even offered DIY sign templates featuring glittering variations of the symbol to take to the marches. A symbol that debuted for around 400 women in 1968 was now being seen and shared by millions of women, men, and children in what might be the single largest day of demonstration in United States history, according to Erica Chenoweth, professor of international relations at the University of Denver.

What inspired these protesters? The organizers of the 2017 Women’s March on Washington declared that its mission was to “stand together in solidarity with our partners and children for the protection of our rights, our safety, our health, and our families – recognizing that our vibrant and diverse communities are the strength of our country.” Their website offers the list of “Unity Principles” that guided the March, including ending violence and upholding reproductive rights, LGBTQIA rights, worker’s rights, civil rights, disability rights, immigrant rights, and environmental justice. More than 500 organizations and groups from all over the country joined the March.

Institutions across the country have rushed to document and analyze the marches, from preserving abandoned protest signs to creating programs exploring the movements emerging from the marches. The Sallie Bingham Center, home of the Robin Morgan Papers and the now-even-more iconic woman symbol-with-fist, remains dedicated to documenting and providing access to women throughout history, from those who marched for women’s rights in Atlantic City in 1968 to those who marched throughout the world on January 21, 2107.

On Monday, February 6th at 11:45 a.m., the Forum for Scholars and Publics at Duke will host “Women’s March: The Long View,” a wide-ranging panel discussion with Duke University scholars Laura Micham, Jocelyn Olcott, Deondra Rose, and Ara Wilson. The panel will discuss the place of the event within longer histories of feminist organizing, the cultural and symbolic politics at play in the march, its broader political and policy implications, and the possible futures of the movement. Optional Facebook RSVP.