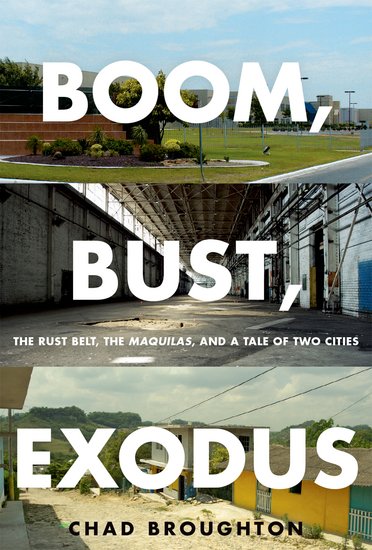 Boom, Bust, Exodus: The Rust Belt, the Maquilas, and a Tale of Two Cities

T he Washington Office on Latin America (WOLA) and Duke University have named Chad Broughton’s book, Boom, Bust, Exodus: The Rust Belt, the Maquilas, and a Tale of Two Cities (Oxford University Press, 2016) as the winner of the 2016 WOLA-Duke Human Rights Book Award. Broughton will be at Duke University on March 23, 2017 to accept the award.

Boom, Bust, Exodus traces the ripple effects of a single factory closing in Galesburg, Illinois, and its reopening in Reynosa, Tamaulipas, a border city in Mexico. Broughton uses a transnational and longitudinal approach to tell a human and humane story of the NAFTA era from the point of view of those most caught up in its dislocation – former industrial workers and their families in the Rust Belt; assemblers and activists in the borderland maquiladoras; and migrant laborers from the Mexican countryside.

Chad Broughton, senior lecturer in Public Policy Studies at the University of Chicago, conducted several years of fieldwork in the United States and Mexico, and interweaves stories of people, places, and policies in this narrative account. He remarks, ”

I’m deeply honored to receive the WOLA-Duke Human Rights Book Award. After an election cycle filled with divisive sloganeering about trade and immigration, I believe it’s critical to move beyond demagoguery in order to understand these complex social and policy issues as they are felt in the everyday lives of working people on both sides of the U.S.-Mexico border. I hope Boom, Bust, Exodus has contributed to the effort to amplify their voices and their cause.”

First awarded in 2008, the WOLA-Duke Human Rights Book Award honors the best current, fiction and non-fiction book published in English on human rights, democracy, and social justice in contemporary Latin America. The books are evaluated by a panel of expert judges drawn from academia, journalism, and public policy circles.

Leonor Blum, WOLA-Duke Human Rights Book Award Committee Chair and Emerita Professor of History and Political Science at Notre Dame of Maryland University, comments, “This is a timely reflection on the plight of labor as a result of globalization. The longitudinal interviews of American workers are excellent and we feel for each individual.”

This year’s judges include Alex Wilde, American University Research Fellow in Residence, who says, “Boom, Bust, Exodus is a searching examination of the human effects of globalization on communities in the US and Mexico. It is a model of how serious scholarship can illuminate complex issues. It could hardly be more resonant with issues central to the U.S. election campaign and its outcome.”

Fellow judge, author Roger Atwood, states that, “There are plenty of books out there on the decline of industry in the age of NAFTA. What makes this one innovative, even pioneering, is the way it delves into the effects of this process in Latin America, and more specifically Veracruz and Tamaulipas, and weaves the two sides of the story together without giving short shrift to either.”

Holly Ackerman, librarian for Latin America, Iberian, and Latino/a Studies at Duke Libraries, comments, “I found this to be well written, engaging for both academic and popular audiences, and a profoundly timely reference that recognizes the struggle for human dignity across borders.”

2015 – Kristen Weld, Paper Cadavers: The Archives of Dictatorship in Guatemala

2014 – Oscar Martínez, The Beast: Riding the Rails and Dodging Narcos on the Migrant Trail

2013 – Jonathan M. Katz, The Big Truck That Went By: How The World Came To Save Haiti and Left Behind a Disaster

2008 – Francisco Goldman, Who Killed the Bishop? The Art of Political Murder