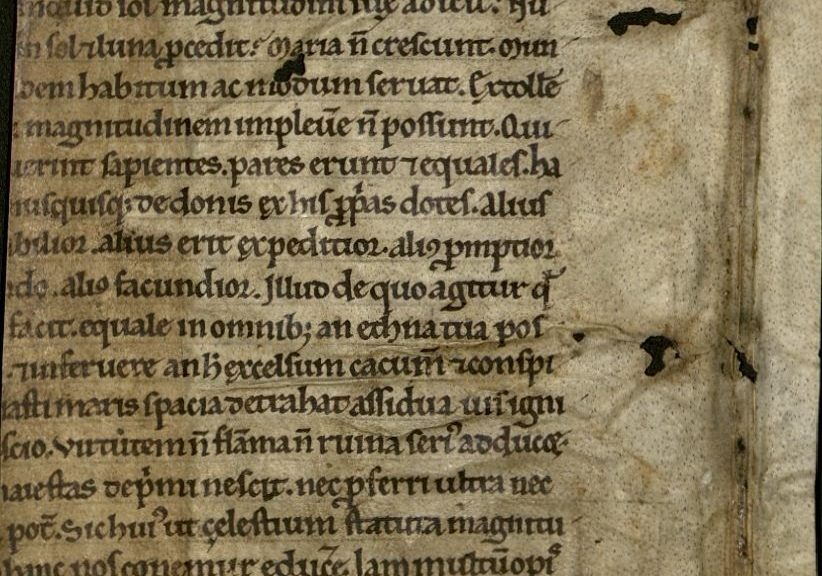 The Rubenstein Library’s Latin Manuscript 159 includes fragments of two well-known texts by Seneca the Younger (or Lucius Annaeus Seneca, 4 BCE – 65 CE), the Roman Stoic philosopher, as well as an epitaph for Seneca. This modest manuscript is comprised of only two small leaves of vellum, apparently separated from a florilegium (a medieval compilation of writings assembled by a scholar). A mid-12th century manuscript, it likely derives from Northern France. Duke University acquired it in 1995.

Latin MS 159 is an exciting piece, even though these surviving bits don’t include a single complete text by Seneca. Among the texts included, however, are the majority of letter 79 from Seneca’s Epistulae ad Lucilium (Letters to Lucilius) and the opening of his De Beneficiis (On Benefits). Letter 79 has been described by scholars as a discourse on scientific discovery. In it, Seneca asks his correspondent Lucilius to climb Aetna (Mount Etna) in Sicily to make first-hand observations, and to write something from his impressions. Climbing a volcano is no easy thing, but Seneca is crafty in his shaming: “Now if Aetna does not make your mouth water, I am mistaken in you” (“Aut ego te non novi aut Aetna tibi salivam movet”).*

The recto of the second surviving leaf contains the opening of De Beneficiis (On Benefits or On Gifts and Services). This work concerns the giving and receiving of benefits, but also how to express gratitude appropriately. For this Stoic, ingratitude is pervasive in humanity: “Nor is it surprising that among all our many and great vices, none is so common as ingratitude” (“Nec mirum est inter plurima maximaque vitia nullum esse frequentius quam ingrati animi”).

*Translations from the Loeb Classical Library.