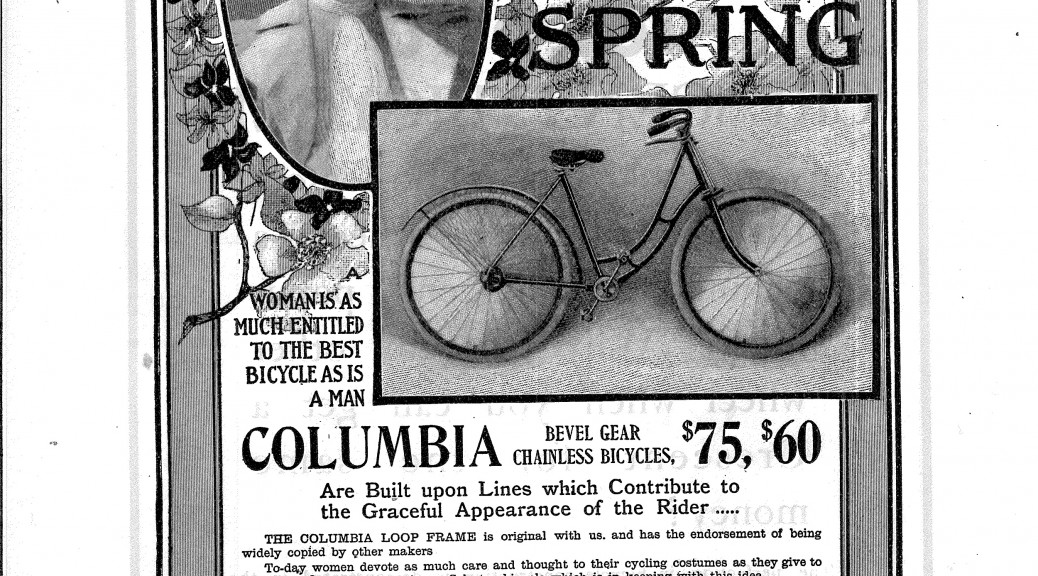 Spring, and a woman’s thoughts turn to…bicycles? Apart from sudden showers and the onslaught of inchworms and allergens, spring is perhaps the finest season to ride. Trees are filling out, flowers are a’bloom and the birds are a’tweet: in short the whole planet has its hormones on fine display. What’s a girl not to like—especially on a bicycle built for her, equal in every way to a man’s?

This 1900 ad for Columbia’s chainless bicycle makes the progressive argument that women are entitled to the same quality bike as a man. The copy goes on to show how the bike’s frame accommodates the latest in women’s biking fashions, and how the chainless design facilitates mounting and dismounting while eliminating the possibility of one’s skirt getting caught in a chain—or soiled by it, a concern that persists among our current-day urbanites rolling along with the right pant-leg rolled-up out of harm’s way. Actually, this basic frame design is still with us, in unisex “Dutch” and townie bike styles like the Breezers that Zagster provides for rent. Not only that, but the “bevel gear” drive system was the precursor to today’s eclectic shaft-driven bicycles (still trumpeted as “innovative.” Hah!). All in all, the Columbia was a triumph of engineering in its day, especially with the available option of a coaster brake, which is also still in use in kids’ bikes and beach cruisers.

Columbia additionally had the marketing vision to realize that the bike and rider formed a single ensemble, where the lines of the frame “Contribute to the Graceful Appearance of the Rider…”  That came at a price, though. $75 in 1900 roughly equates to around $2000 today, which would put a modern woman in the market for a top-of-the-line bike from today’s major manufacturers. On the other hand, grace is priceless, and the freedom and autonomy provided by the bicycle was likely well worth the investment. In fact, the bicycle has occasionally been praised as an instrument of liberation, and early feminists such as Susan B. Anthony were also advocates for cycling, as much for gender-political as for its health benefits. Liberate the body and the mind will follow!