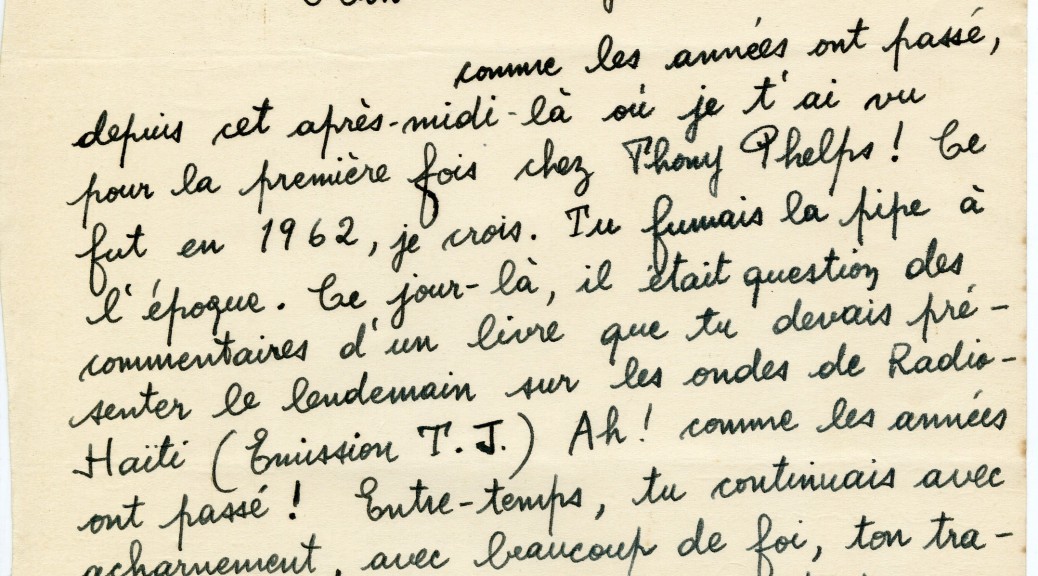 On December 29, 1972, the renowned writer, poet, and visual artist Frankétienne, one of the fathers of the Spiralist literary movement, wrote a letter to his friend, Jean Dominique.

My very dear Jean, how the years have passed, since that afternoon when I first saw you at Thony Phelps’ house!  That was in 1962, I believe.  You smoked a pipe at the time.  That day, there was talk of a book upon which you would be commenting the next day on the air at Radio Haïti.  Ah!  How the years have passed!

For Frankétienne, Jean Dominique was both a personal friend and an intellectual interlocutor; the cultural programming he oversaw at Radio Haiti not only showcased Haitian arts and literature, but also influenced them.

Meanwhile, you continue, with ferocity and great faith, in your work as a lucid informant, guiding your listeners, aiding the youth with your advice.  And as for me, I was among that number who listened to you, who followed you closely.  Your critical analyses were for me an invaluable contribution, as much on the cultural level as on the purely human level. Your Sunday broadcasts enhanced my love of art, cinema and in particular literature, even influencing my reading and literary research.  And, today, now that we have become friends, this remains true.  Jean, my brother, you could not suspect or guess how my conversations with you have oriented and enriched my work as a writer.  Your insights have been of great use to me, with regard to the material of my last book Ultravocal…

To listen to these creators of art and of knowledge is to reorient the narrative about Haiti.  The standard story of Haiti is dominated by crisis: rare is the mainstream US news article that does not contain the words “the poorest country in the Western hemisphere.”  Haitian people are depicted as either powerless victims or bloodthirsty criminals.  For centuries, lurid, racist, deterministic narratives have enabled dominant geopolitical powers to undermine Haitian sovereignty and justify exploitation. According to these tropes, Haiti and Haitian people are organically poor – not only materially and economically, but intellectually, culturally and morally as well.  Haiti is atavistic, violent and diseased. Haiti is starving children, “boat people,” ragged people.  Haitian suffering is described, exaggerated, and luxuriated over, but rarely presented as anything other than an inevitability.

Radio Haiti presented Haitian narratives about Haitian crisis, exposing and analyzing the structural causes of oppression and political instability.  The archive contains the voices of the intellectual elite and of the urban and rural poor alike, for Radio Haiti was one of the few places at the time where the oppressed and disenfranchised masses had lapawòl, the power of speech.

And in its cultural programming, Radio Haiti achieved even more: it decentered the narrative of crisis.  It presented not a Haiti of suffering, but a Haiti of beauty and brilliance, one in which crisis is met with and defied by acts of creation.  A Haiti in which art, both implicitly and explicitly, is political.

A few months ago, I found a little piece of ephemera hidden face-down at the bottom of a reel-to-reel tape box.  It had been used as scratch paper: on one side is a handwritten list of sponsors from the late 1980s (Parkay Margarine, Kraft Mayonnaise, Breacol cough syrup, and so on).  On the other side is this:

By 1979-1980, businesses no longer advertised on Radio Haiti. The station openly opposed the Duvalier dictatorship, and potential sponsors, afraid of reprisal, did not want to be seen as accomplices.  During this time, station manager Richard Brisson famously raised some money by using his car as a taxi. And in December 1979, several celebrated Haitian painters donated their works for an art raffle in support of Radio Haiti.   Each ticket cost three dollars, for the chance to win a piece by one of these twelve renowned artists.  The ticket is a relic, a souvenir of the extraordinary devotion that Radio Haiti inspired.  It is also a poignant reminder of the grinding struggle to keep the station afloat day-to-day in the face of economic obstacles and political oppression.

Sometimes it feels as though Radio Haiti’s story, like that of Haiti itself, is eclipsed by crisis — that Jean Dominique’s assassination has become the principal lens through which we understand and remember Radio Haiti.  But the loss of Jean Dominique and the injustice of his murder matter because his life mattered, because Radio Haiti’s many decades of work and legacy matter.  Before the symbolic weight of memory, before the burden of hindsight, before the doomed prophet, there was the daily work of the station — all of which lives on in this archive.

So much comes before death; so much remains when death is no more.

In his letter to Jean Dominique, Frankétienne outlines the challenges facing the Haitian writer who strives to be accessible.

All writers, at least as far as I’m concerned, would like to be read and understood by their people, by the greatest number of people possible.  It is our dearest hope.  Yet, if that does not occur immediately, then another story, often macabre, begins.  In the case of our country, one must overcome a double illiteracy: 1) obvious illiteracy (the inability to read at all, whether in Creole or in French) and 2) hidden illiteracy (the belief that one knows how to read, but in truth one does not perceive the structure and the possible meanings of a text).  Faced with this double difficulty, or rather facing this double obstacle, the Haitian writer has no choice.  It is absolutely impossible for him to write for the masses that cannot read at all.  And this makes him suffer terribly, especially when, in his books, he reckons with problems that would be of utmost interest to those illiterate masses

Radio was a medium of unparalleled power in twentieth-century Haiti: it enabled people to participate in public discourse, as both listeners and speakers, whether or not they could read and write.  And it allowed writers to reach a far broader audience, to be true public intellectuals.  For this is what Jean Dominique was: a public intellectual. It was on the radio that his intellect unfurled: analytical and incisive, sometimes staggering.

There is a poet character who wanders, searching through words in a verbal delirium, writes Frankétienne in his letter, describing the themes of Ultravocal.

In the course of his phantasmal voyage, overcome by pain, he discovers that his drama is not entirely personal, that his own rupture is nothing more than one aspect of a far wider tragedy, the great human misery.  From that moment on, the text breaks apart, spreading from the individual to the collective, from the subjective to the objective, from the particular to the general…  And the poet character, entwined with the narrator, dizzy, speaks. The poetic inflections of a voice addressing a tribe of men besieged by beasts.  My voice, perhaps.  Yours, or that of either of us.  And, when the narrator suggests… that one day, evil will be struck down into the dust with a terrible noise, then begins the final song, that of hope.

A week to the day before Frankétienne wrote his letter, Jean Dominique interviewed the painter Rose-Marie Desruisseau, in which she describes participating in ceremonies as part of her research for a series of paintings on Vodou.  (It was revolutionary, at that time, to speak on the radio of Vodou as a topic of intellectual and cultural importance and as everyday practice: Duvalier père had politicized and exerted control over Vodou, manipulating its imagery for his own purposes and power while exercising sanctions on the practice.)  Desruisseau describes her interactions with the Gede spirits, who are intermediaries between life and death. They dance provocatively through the cemetery, and shout and sing obscenities.  They are lively gods of death.  Vulgarity and humor, which transcend respectability and social convention, are the very things that enable Gede to straddle life and the afterlife, to be the master of the crossroads.

“I began first with the gods of death, you see, and it was not death that I found there.  I found intense life there… among the Gede spirits.  I did not find death at all.”

Radio Haiti’s archive, like a cemetery, like Haiti itself, is a place that could be defined by tragedy, loss and death.  The archive, like Haiti’s history, is filled with human rights violations, massacres, impunity, and assassinations.

Yet, listening to artists and iconoclasts, creators and truth-tellers, I recall those same words: It was not death that I found here, in Radio Haiti’s archive.  I found intense life here; I did not find death at all.