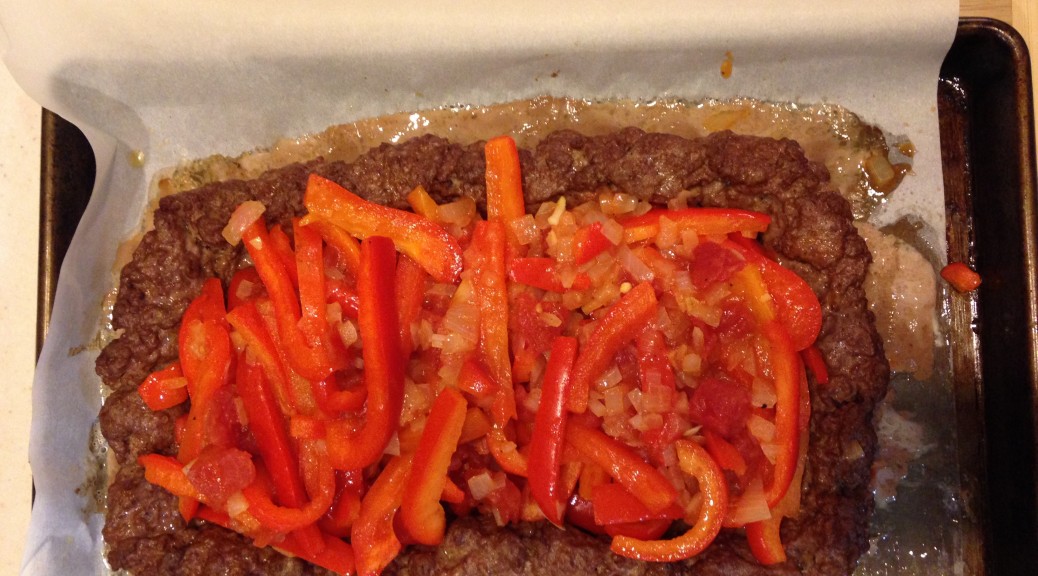 This very special edition of the Rubenstein test kitchen is intended to build bridges between Duke and UNC, between a Digital Collections Program Manager and a Serials Access Librarian. Though both librarians, they live completely different professional lives. Until now…

Given the digital nature of Molly’s work, we decided to choose a recipe from those that had been digitized as part of the Emergence of Advertising in America digital collection. After looking at a handful of recipes we realized that Molly didn’t want to cook with beef tongue, Kurt didn’t want to bake, and neither of us wanted to deal with jello. So we settled on this “pretty and palatable” gem of a recipe from the The Kitchen Encyclopedia, by Swift & Company: “Spanish Minced Beef in a Meat Box.” 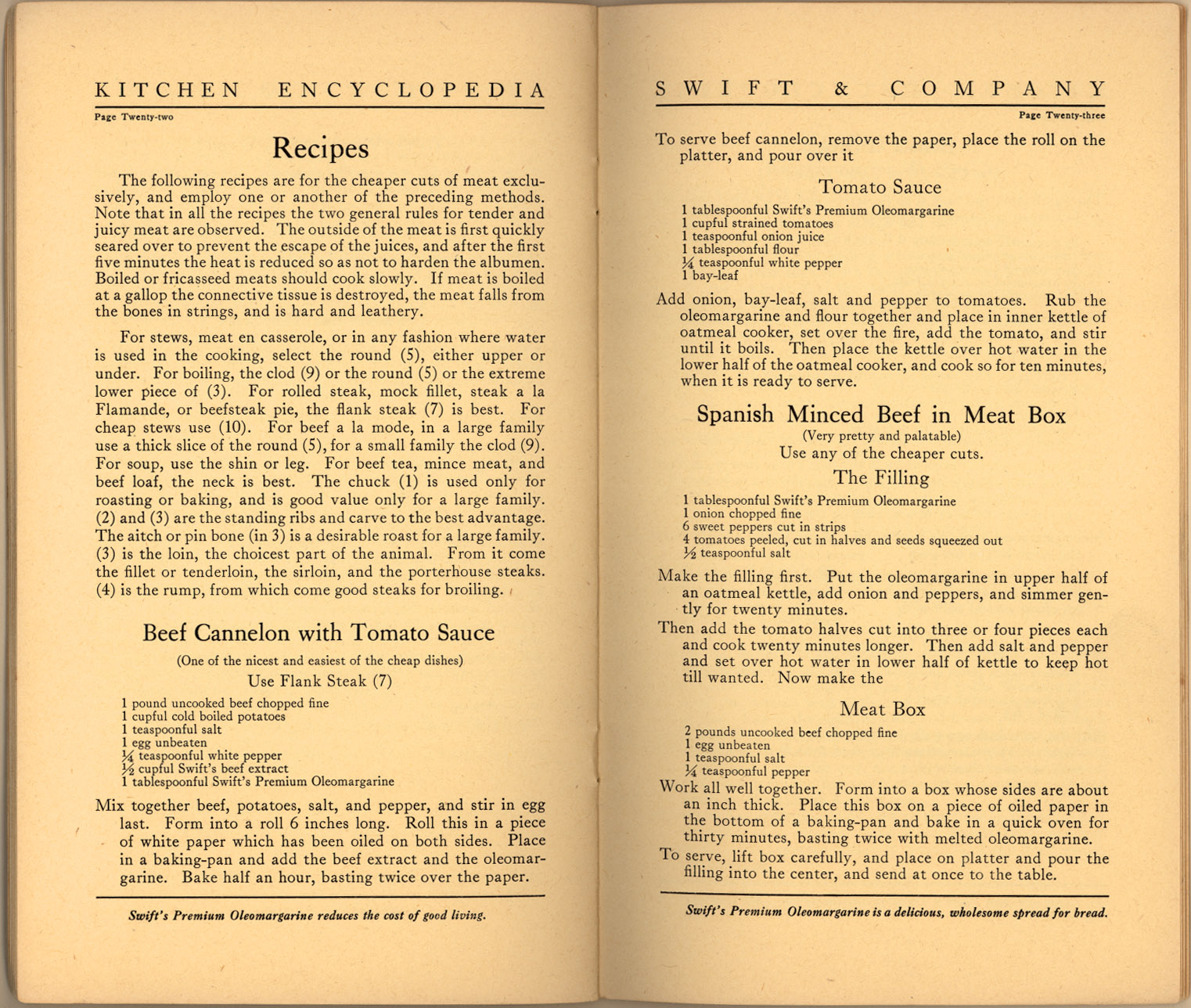 We were excited about taking on the challenge of constructing a meat box to contain yet more meat that the title conjured in our minds, although we had no idea at all how it might work. It wasn’t until later, when we were about to start cooking, that we paused to ask the following: What exactly is Spanish about a recipe in which the only spices are salt and pepper? Why does the title refer to minced beef in a meat box when there is no minced beef listed as an ingredient in the filling? This last question particularly filled us with anxiety – did we miss something? Should we have assumed that since the recipe title refers to minced beef in a meat box, that we should put minced beef in the meat box, even if it’s not called for? (About the matter of a “meat box.” As our guests pointed out, can something with only four sides properly be labeled a box?)

Cooking can be so stressful!

Before we proceed, however, a question posed by the text: “Have you tried Swift’s Oleomargarine?” If you have not, permit the book to let you know, “It is worth trying” (p. 26).  In case that’s not enticement enough, consider that “The price of butter holds no terror for users of Swift’s Oleomargarine” (p. 27). 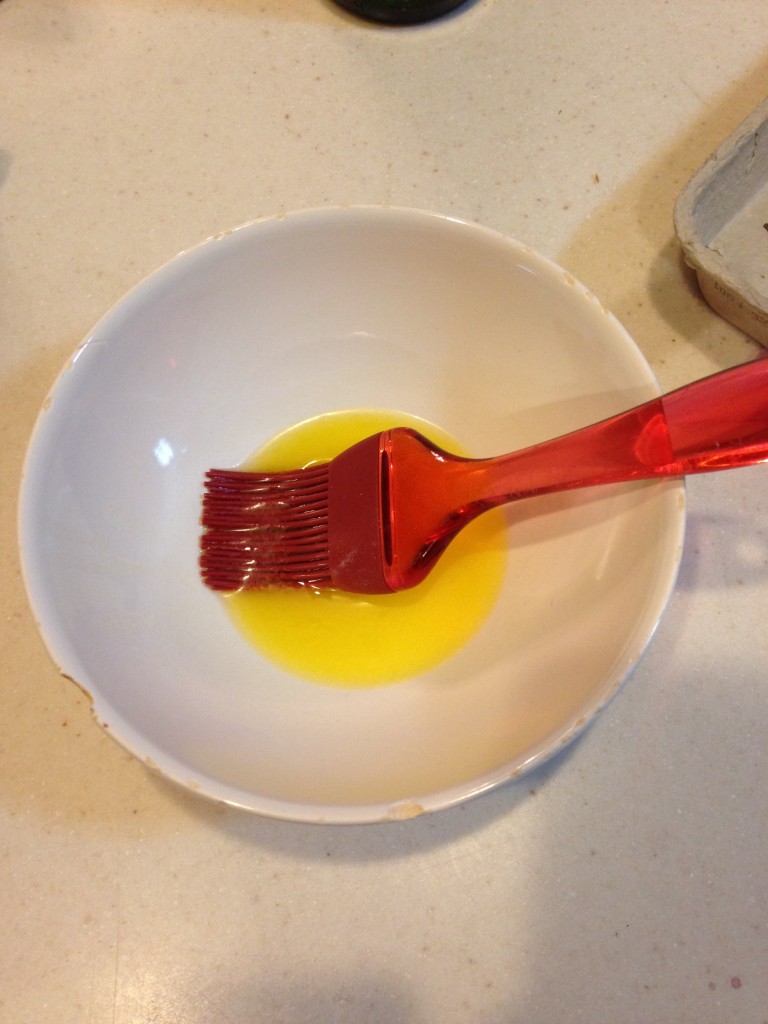 Theses quotes are Molly’s favorites of the short, persuasive selling points on the benefits of oleomargarine that appear on every page of the book (and which had to be pointed out to Kurt, who overlooked entirely the margarine-filled pearls of wisdom in his single-minded focus on the meat box). Has it been mentioned that Swift & Company were leading the fight against the tyranny of high-priced butter circa 1911 with their “oleomargarine” and that this cookbook touts that revolution? Indeed, anyone interested in oleomargarine (or House-Cleaning Hints and Helps (p. 9), or The Practical Value and Use of Fireless Cookers (p. 17) … To the Wage-earning Woman (p. 21)) should consider this book a must-read. But we digress.

The recipe calls for the filling to be cooked in an “oatmeal kettle,” and we did not then nor do we now have any idea what that means. Without consulting any resources (bad librarians!), we decided it must be a double boiler, which we don’t own. This leads us to the night’s first derivation from the recipe, as we decided to saute the filling in a saute pan. This filling consists of sweet peppers (red bell peppers, in our case), tomatoes (canned, in our case, rather than whole tomatoes “cut in halves and the seeds squeezed out”) and onions cooked in (you guessed it) oleomargarine, which we substituted with regular margarine (do you know how hard it is to even find margarine at the grocery store these days?). 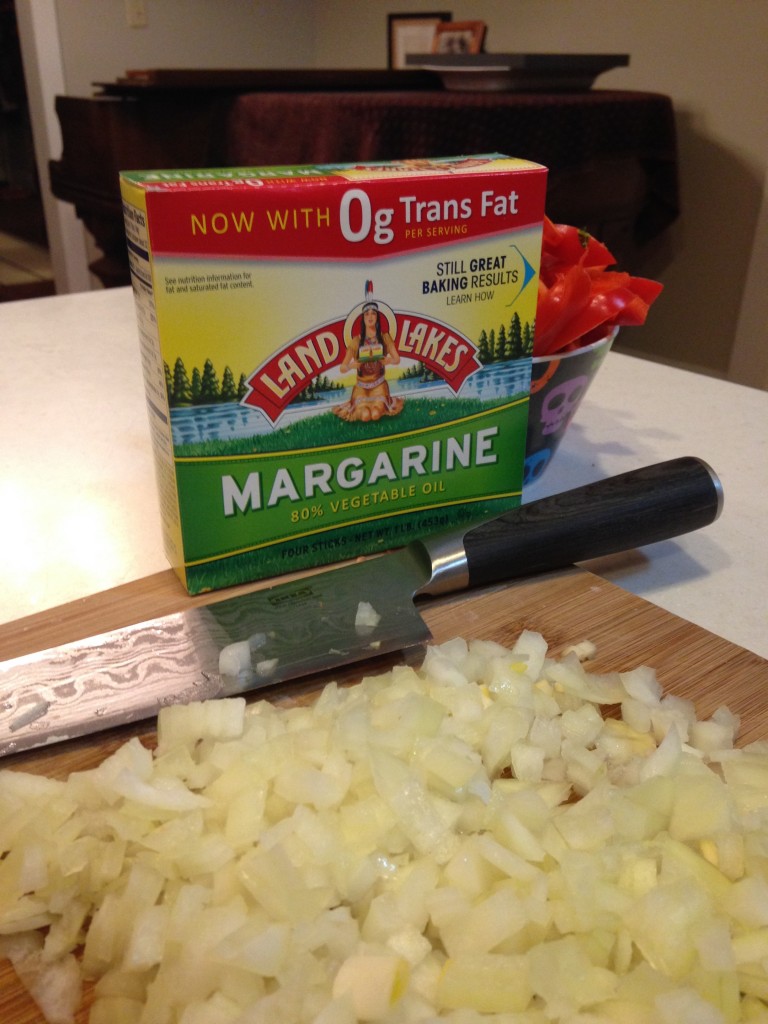 Regarding the preparation of the filling, refer to these excerpts from our kitchen conversation: “peppers into strips – insanity!” “1 onion to 4 peppers – madness!” This from Kurt, a former student in the esteemed Johnson County Community College Hospitality & Culinary program.

With the filling sauteeing-rather-than-sweating away, we turned our attention to the “meat box.”  The only instruction given by the recipe is to “form into a box whose sides are about an inch thick.” This (relative lack of) instruction generated some pretty fundamental (and philosophical) questions: should the box have a bottom and a top? If it doesn’t have a bottom and a top, is it still a box (see above: guests)? How tall should it be? WHAT IS IT FOR ANYWAY?!?” 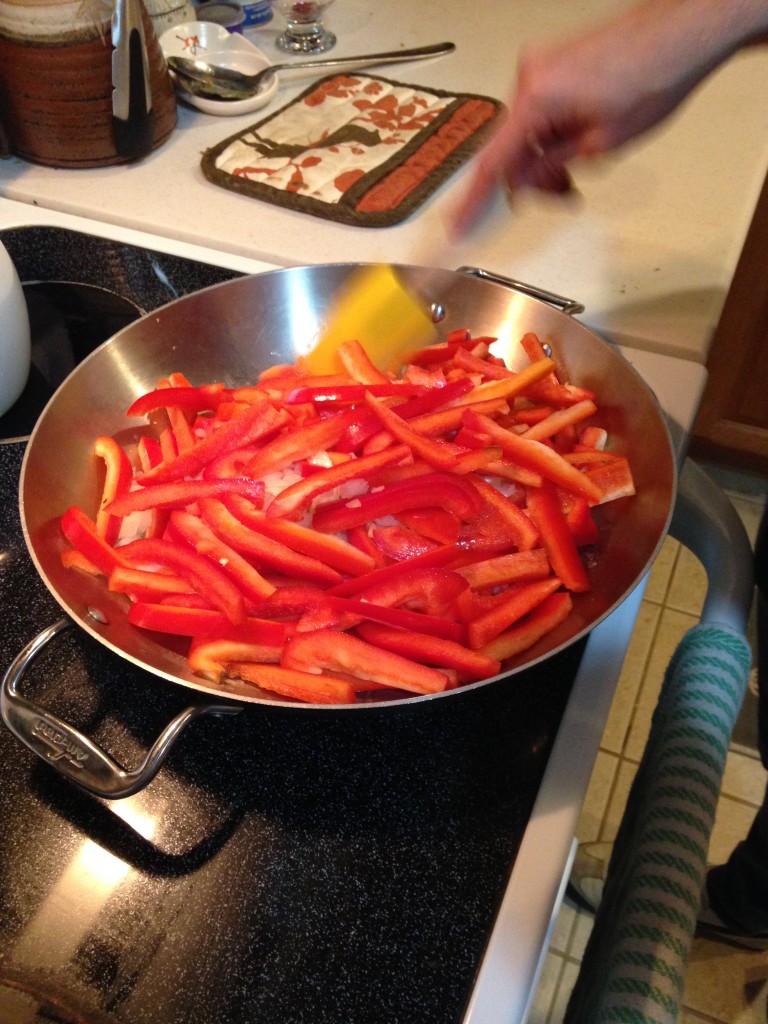 Sidebar: When did cookbooks stop presuming any basic knowledge of cooking – as seems to be the case in the books we looked in for recipes – and become the step-by-step manuals they are today? 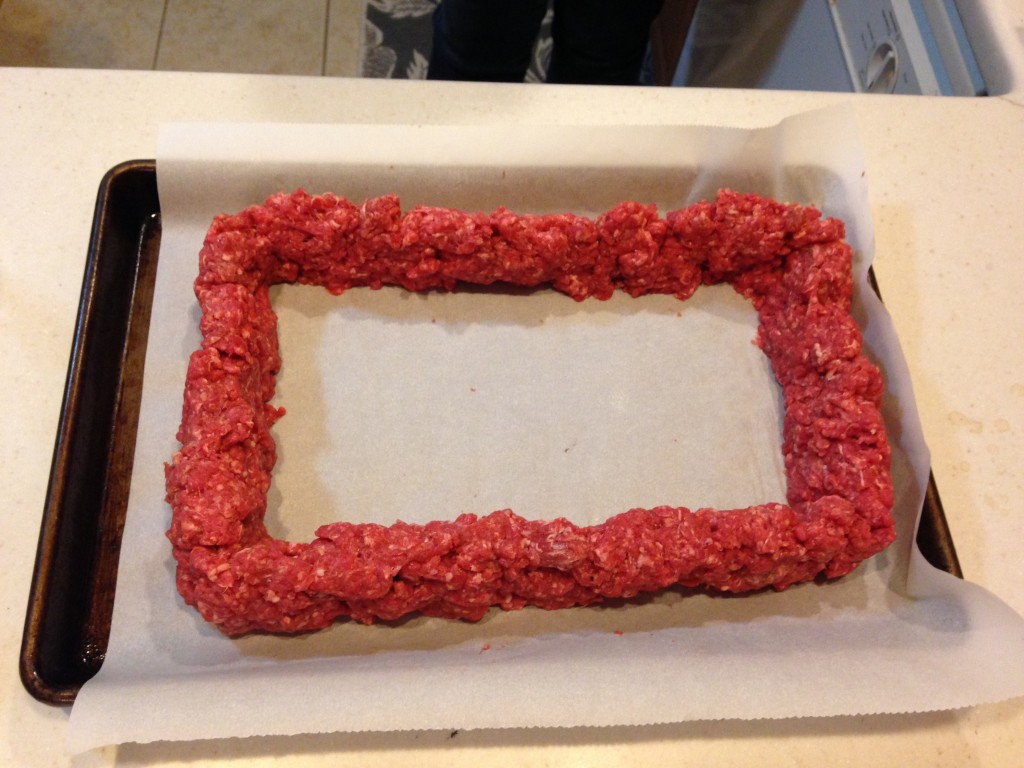 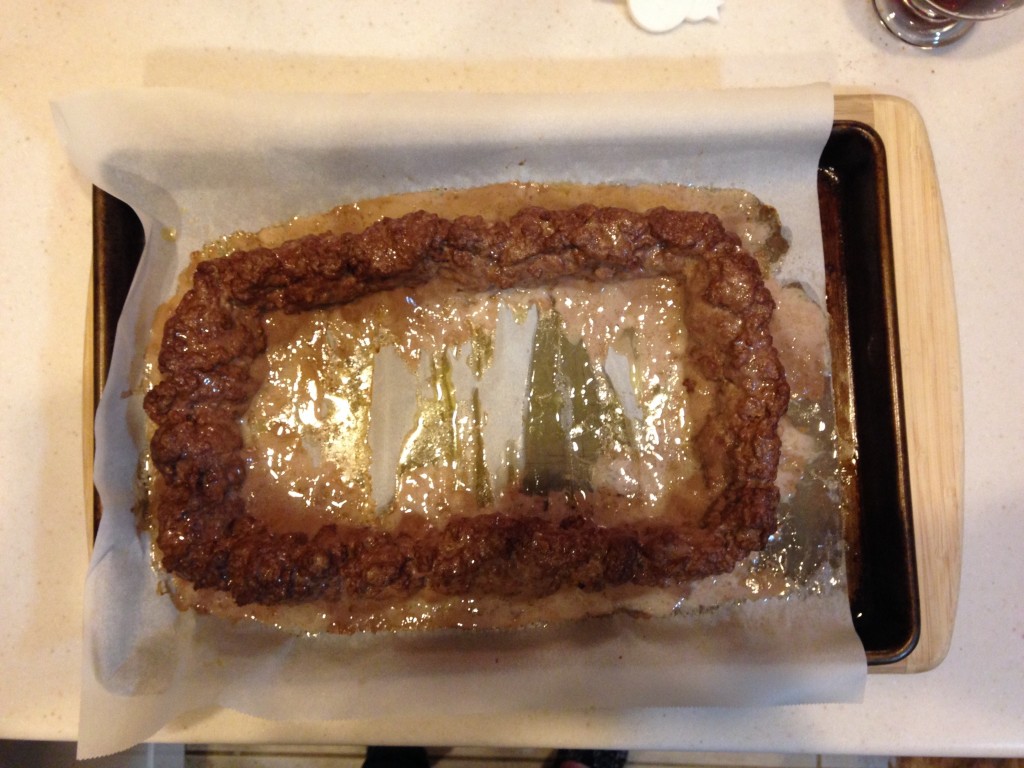 In the end we created a kind of meat enclosure, with no meat top and no meat bottom. We basted the box with melted margarine, as per the recipe, before and during cooking. Once it was cooked in a “quick oven” (we used our regular old, modern-day electric oven, which is pretty quick), we put the filling into the enclosure and served it to some fellow librarians who were employed as testers. 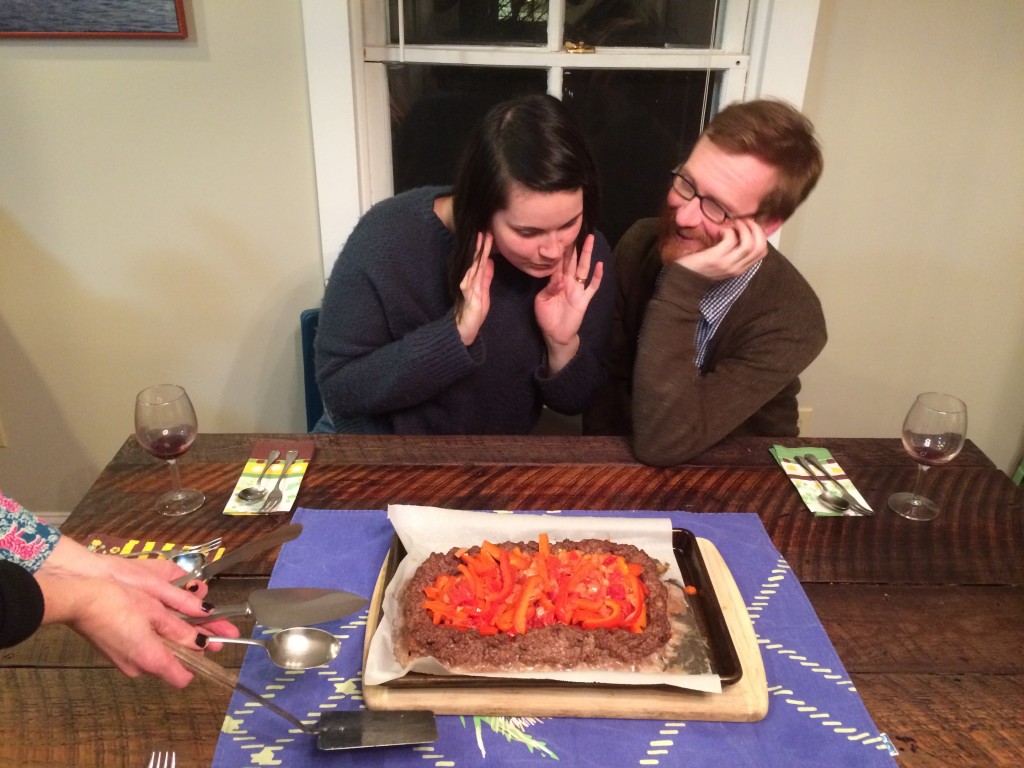 Sidebar: Unlike the ongoing mystery of an oatmeal kettle, Kurt believes a quick oven to be one that’s pretty hot, i.e., 425 degrees. This “knowledge” comes from a search in the midst of constructing this post, and might have been more helpful in determining proper oven temperature in the moment (we went a slower 350 degrees), but then, that might have been cheating. 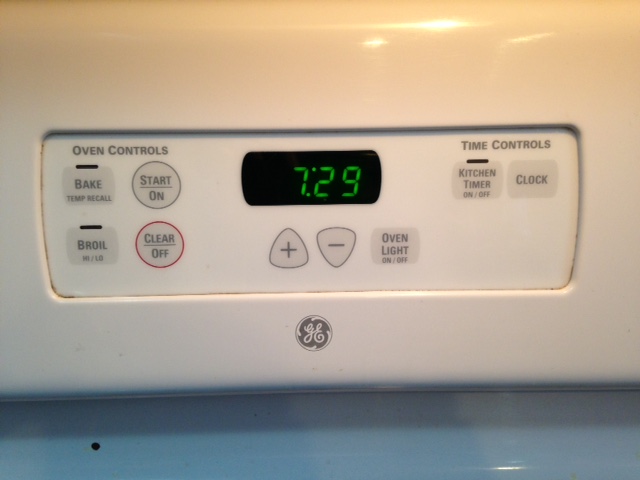 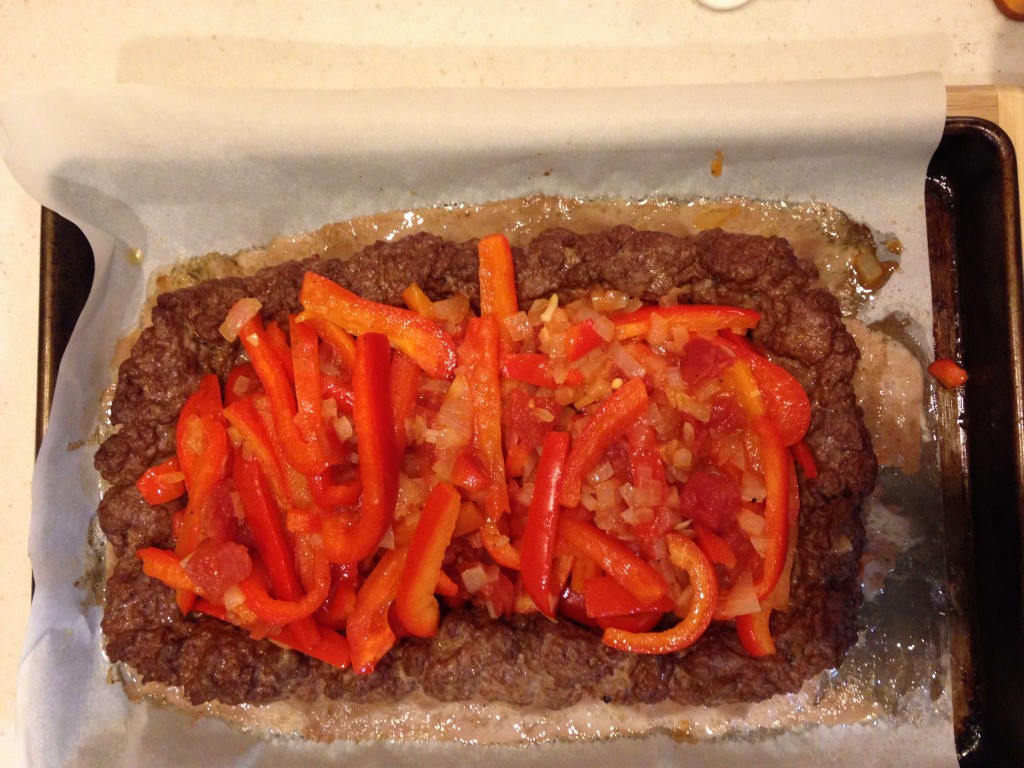 The verdict? Everyone agreed it tasted like bland hamburger. Not bad, but not really flavorful in any way, either. Certainly not flavorful in any way, shape or form associated with “Spanish” cooking. If we ever do this again, we decided we would add sausage, not use margarine, and add some actual seasonings, maybe some paprika, a little garlic, and some rosemary. We wonder what might have been had we not missed the advice on the page opposite that “For … mince meat … the neck is best.” We might also try using potatoes for the bottom of a true box. We are still really unsure whether this dish should have a top, and why this involves forming a box in the first place. Some questions will just have to remain a mystery. 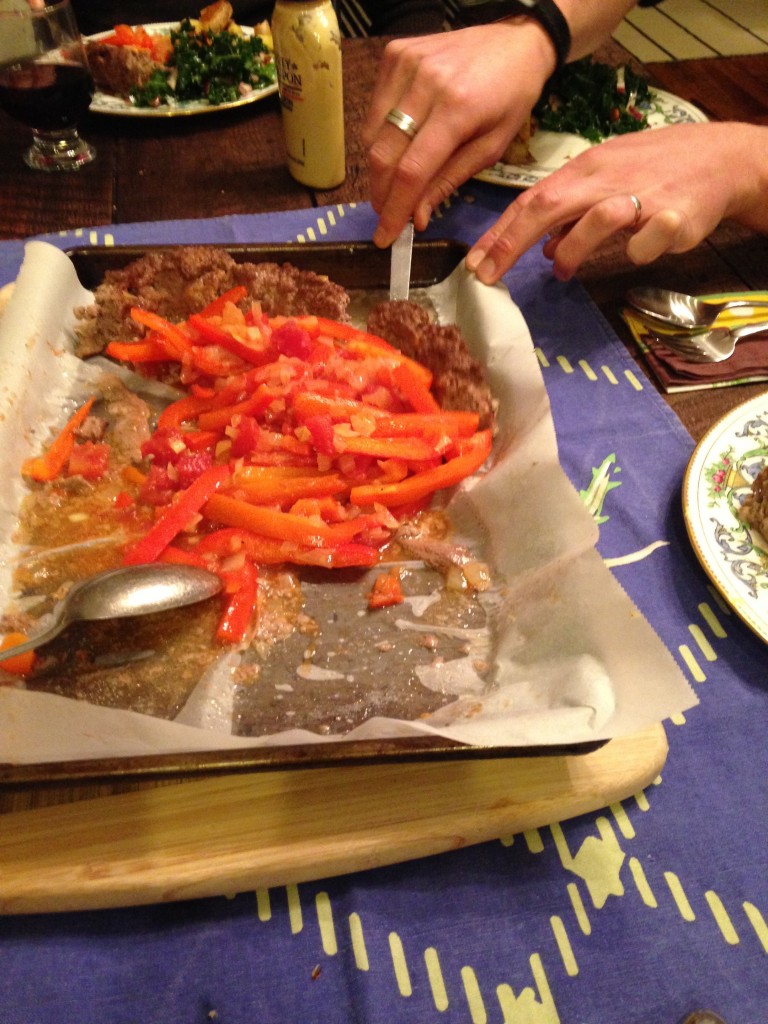 Writing and Talking about Memoir: a Conversation with Sallie Bingham
Art, Abortion, Activism
Behind the Scenes: Intern Angela DiVeglia

One thought on “Meat Box, or, The Price of Butter Holds No Terror for Users of Swift’s Oleomargarine”