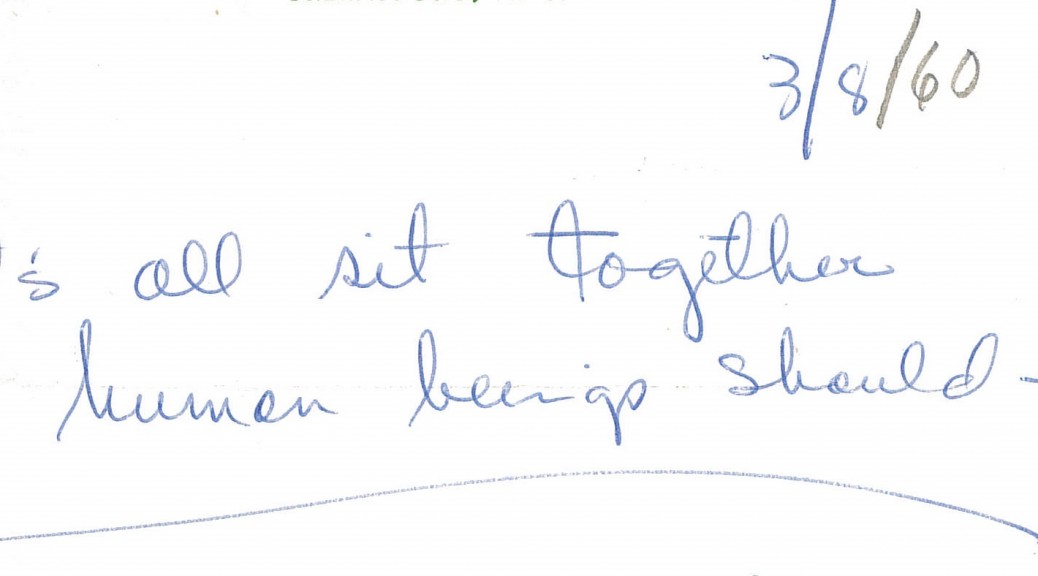 This month marks the 56th anniversary of the Greensboro Sit-Ins, which began on February 1, 1960 when four African-American students from North Carolina A&T walked from the campus library to the local Woolworth store, sat down at the “whites only” lunch counter, were denied service but refused to leave until closing. Over the next week, several hundred protesters took part in the sit-ins at the Woolworth and later Kress department store in Greensboro.  The sit-ins grabbed national headlines and similar protests followed in towns across the South.

With the city in turmoil, Greensboro Mayor George Roach appointed an Advisory Committee on Community Relations to help coordinate a response to the sit-ins. He appointed Burlington Industries executive and city councilman Edward R. Zane to chair the newly formed committee. In his first act as chair, Zane issued a call to Greensboro citizens asking them to share their opinions on the “race issue.” Specifically, Zane encouraged citizens to send letters to the committee “expressing their views on recent racial problems,” and he laid out five possible solutions to the lunch counter integration question at Woolworth and Kress:

The Rubenstein’s Edward Raymond Zane collection contains several hundred of these letters from Greensboro citizens from late February to early March 1960. The letters, written by both white and African-American citizens, express support for or opposition to integrated seating at the Woolworth and Kress lunch counters. In aggregate, they provide a window into race relations in the community and help document the prevailing arguments on both sides of the integration issue.

More than a half century later, we remember the Greensboro Sit-ins as one of the seminal events of the civil rights movement. To commemorate the sit-ins, a portion of the Woolworth lunch counter now resides in the Smithsonian and four stools from the counter are on display in the International Civil Rights Center & Museum in Greensboro. The letters in the Zane collection are less tangible than these powerful artifacts, but they provide more direct evidence of one community’s response to direct action protests and serve as testimony to the bravery and courage of the Greensboro Four and other civil rights pioneers who ignited a movement to challenge segregation in public accommodations throughout the South.

Post contributed by Noah Huffman, Archivist for Metadata and Encoding.