Paper Cadavers: The Archives of Dictatorship in Guatemala by Kirsten Weld 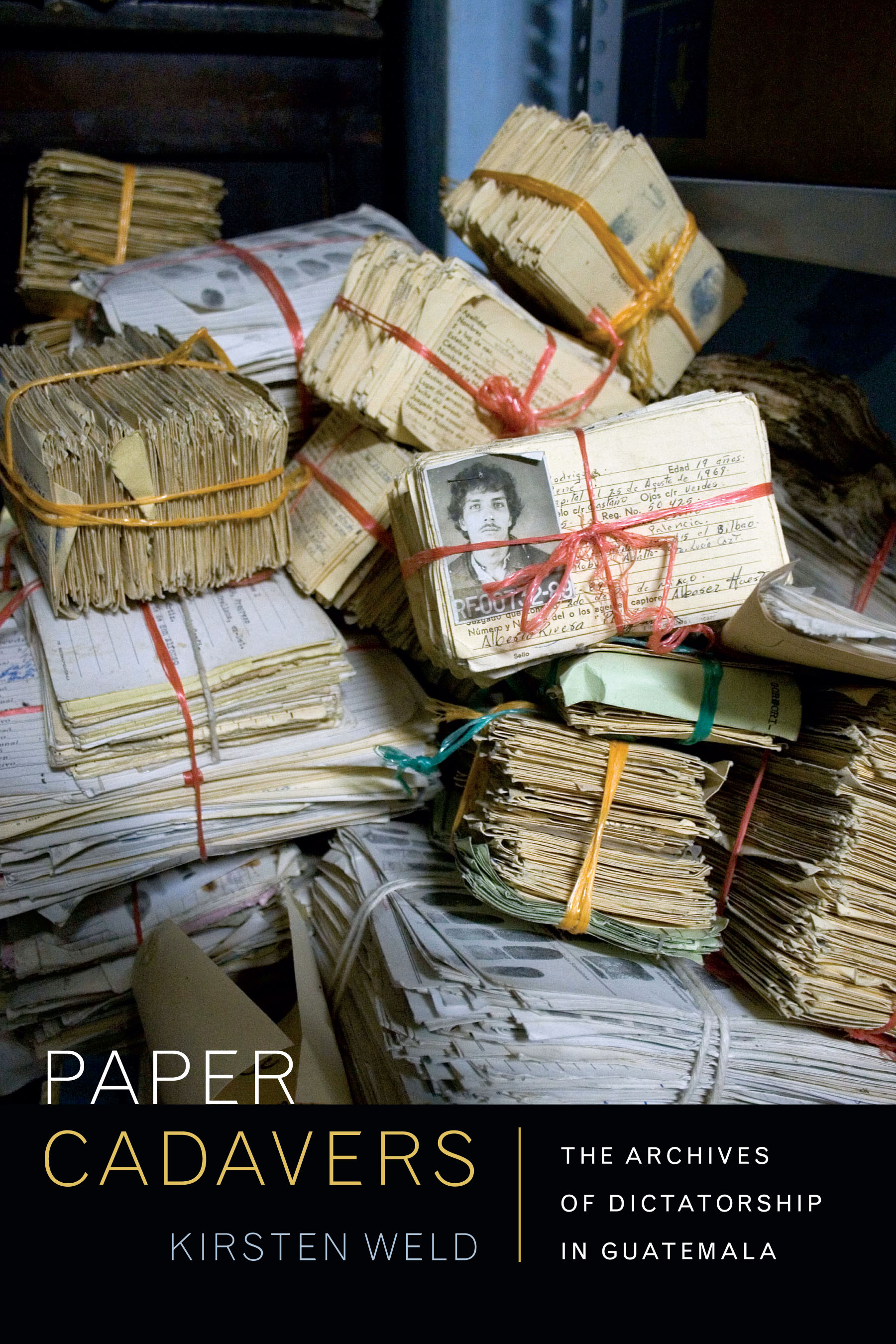 The Washington Office on Latin America (WOLA) and Duke University have named Kirsten Weld’s book, Paper Cadavers: The Archives of Dictatorship in Guatemala (Duke University Press, 2014) as the winner of the 2015 WOLA-Duke Human Rights Book Award.

Weld will be at Duke University Libraries to receive the award, discuss and read from her book.  The award presentation will be followed by a reception and book signing.  The event is co-sponsored by the Duke Human Rights Center @ FHI, and the Center for Latin American and Caribbean Studies.

Paper Cadavers documents the heroic effort of hundreds of idealistic, activist youth who rescued and organized the National Police records under the leadership of a former guerrilla, Gustavo Meoño. In 2005, activists from the Human Rights Ombudsman’s Office (PDH) of Guatemala, while inspecting police premises for improper storage of explosives in Guatemala City, accidentally came across a trove of 75 to 80 million half-moldy pages of National Police (PN) records.

Kirsten Weld, assistant professor at Harvard University, shows how information once employed by the police state to control society and pursue subversives was put to use by the human rights community to reveal the identity of perpetrators of human rights abuses and to bring many of them to trial. In the words of the author, “Records once used in the service of state terror are repurposed by surviving reformers as building blocks for the rule of law and tools of social reckoning.”

Leonor Blum, WOLA Duke Book Award committee chair and emerita professor of history and political science at Notre Dame of Maryland University says, “Paper Cadavers is far more than a narration of the discovery of Guatemala’s police archives. Weld emphasizes both their importance in the reconstruction of memories of the past and as a form of empowerment for the future. A recent development may be a reflection of the public’s demand for greater transparency and truth. In August 2015, the International Commission against Impunity in Guatemala (CICIG) informed Guatemalans that their president and vice-president were both involved in notorious graft and corruption scandals. The public immediately took to the streets and demanded their resignation. Both the vice-president and subsequently the president resigned.”

This year’s judges include American University Professor Alex Wilde who comments that, “[Paper Cadavers] brings alive the world of archives and the political activists that learned to become archivists in the cause of human rights – one of the rare books about the human rights community itself and how it does its work.”

Author Roger Atwood describes how “This well-researched and important book shows how a group of brave researchers used those rediscovered records to document the violence and account for the missing. It is an inspiring story.”

Robin Kirk, faculty co-chair of the Duke Human Rights Center at the Franklin Humanities Institute says, “This is a riveting history of all of the complex – and often dangerous – steps that led to archivists being able to take what was a repository of terror and make it into a well of justice.”

Holly Ackerman, Librarian for Latin America, Iberian, and Latino/a Studies at Duke Libraries, comments, “Paper Cadaver is the first to put archives at the center of a case of transitional justice. She follows the chance discovery of over 75 million pages of National Police records from detection to preservation to use as evidence in trials for human rights violations. It provides a fuller trajectory than has been previously described of the long arc from human rights violation to justice.”

2014- Oscar Martínez, The Beast: Riding the Rails and Dodging Narcos on the Migrant Trail

2013- Jonathan M. Katz, The Big Truck That Went By: How The World Came To Save Haiti and Left Behind a Disaster

2008- Francisco Goldman, Who Killed the Bishop? : The Art of Political Murder