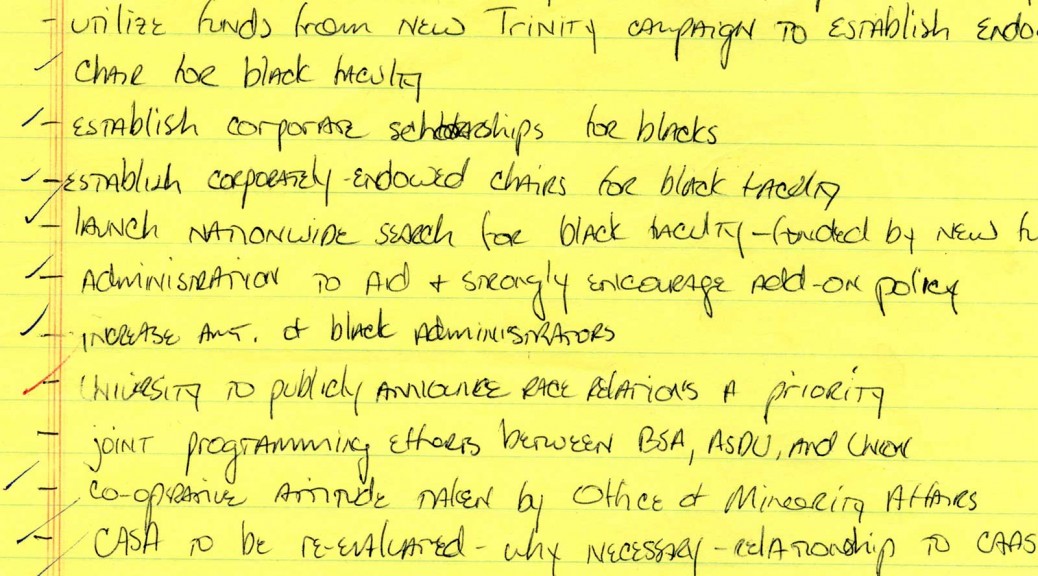 For the past few months, I have been processing the records of the Associated Students of Duke University, Duke’s student government organization from 1967 to 1993. One of the most interesting aspects of working on this collection has been the opportunity to learn about student life in the 1970s and 1980s. In the past year, the Duke community has grappled with questions of diversity and inclusion on campus, issues that were also explored by past Duke students.

In March 1967, the Men’s Student Government Association and Woman’s Student Government Association were replaced by the Associated Students of Duke University, which represented the entire student body. ASDU was led by an elected President, an appointed Executive Committee, and a Legislature composed of representatives from campus living groups. ASDU had a number of responsibilities, including managing student organizations and creating initiatives designed to improve student life at Duke. They also sent representatives to important university committees such as the Academic Council and the Residence Life Council. ASDU also formed a number of internal committees and task forces to study aspects of student life at Duke including housing, dining, and academic issues.

In the fall of 1981, ASDU created the Task Force on Black-White Relations to study the racial climate among undergraduate students at Duke. ASDU was concerned that while desegregation had removed many of the visible signs of racism, inequality still existed on campus. The Task Force on Black-White Relations was led by Trinity student Shep Moyle, who would be elected President of ASDU in 1982 (and is now President of the Duke Alumni Association’s Board of Directors). The Task Force consisted of seven students, including Mark Jones, the president of the Black Students Association.

The committee held a series of public forums in the fall of 1981, which gave students the opportunity to voice their opinions. After the forums, Moyle wrote, “there was an ignorance, an apathy, even a hatred between the races on campus. This is a situation we must rectify. Whites misunderstand the black community’s actions and the blacks misunderstand the white’s [sic] reactions in return. A vicious circle that merely separates the groups even further.” The forums solidified the committee’s impression that actions must be taken to improve race relations on campus.

The Task Force developed a set of recommendations they believed would improve the campus climate. The official committee report of the Task Force on Black-White relations was published in February 1982. The findings of the task force mirrored many diversity concerns that continue to be raised today including enrollment numbers, a lack of faculty of color, and unequal treatment by campus authorities.

In the report, the Task Force wrote that the number of African-American students at Duke was unacceptably low. Their analysis found that over the previous few years, the overall percentage of African-American students at Duke had decreased. The report called for the Duke Admissions department to increase outreach, advertising, and financial aid opportunities for minority applicants. They recommended a 50% increase in the number of minority students for the class of 1986 and a 15% increase for the classes of 1987 and 1988.

The report also indicated that the university needed to increase hiring of minority faculty and staff, stating that eight African-American faculty members out of 350 total faculty was “appalling”. The Task Force suggested that the university launch a nationwide search for talented African-American faculty members and provide incentives that would attract them to Duke.

Additionally, the task force also accused Campus Police of stopping African-American students without just cause because of their race and called for race to be included in the core curriculum and for readings on race relations to be mandatory in freshman classes.

University officials had a mixed response to the report, refuting the claims of biased behavior by the admissions and public safety departments. They also claimed that while the report raised a number of important points, many of the proposed solutions would be unrealistic or too difficult to implement. However, the administration promised to utilize the findings of the report in future decisions. Chancellor Kenneth Pye added, “The report shows a recognition of what is a real problem on campus. I think it is an important addition and a valuable step forward.”

It was interesting to compare the findings of the Task Force on Black-White Relations to current discussions on diversity to see what changes have occurred and which issues continue to be raised. Once reprocessing is finished on this collection, researchers will be able to review the Task Force’s documentation themselves—perhaps as a way to bring these past perspectives to bear on our current discussions. (In the interim, a copy of the final report may be found in box 5 of the Office of Minority Affairs Records.)