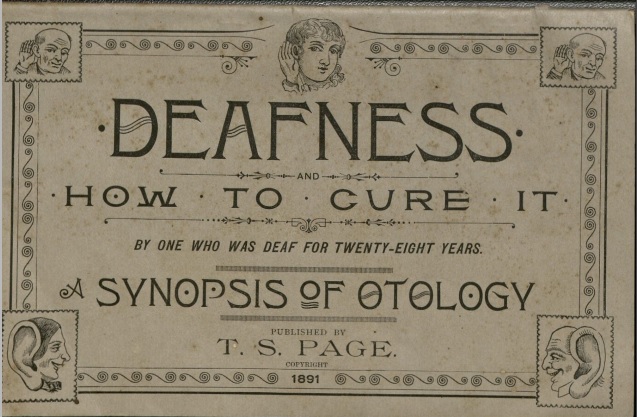 Is there damage to be done from meddling with the ear or attempting any cure for deafness?

“Now, right here,” says T.Page, “stop and think a moment…If your stove smoked constantly, day after day, you would not place a poultice around the stove pipe, would you? You would clean out the flue or chimney, wouldn’t you?” Well, would you? Well, the same should go for fixing deafness, according to Page in his 1891 pamphlet: “Clean out the obstruction inside of your head, and you hear again as well as ever.” Why should one pay for a high-priced aurist (a specialist of the ear), when an easy remedy promises to do the same, at half the cost, and with minimal pain? 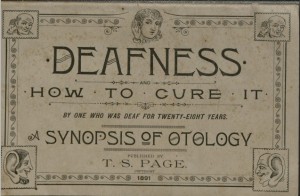 Indeed, what motivated people with hearing loss to select amongst an abundance of deafness cures or make plans to visit the aurist? My monograph, tentatively titled Deafness Misery, Hearing Happiness: Fakes and Fads in Deafness Cures, 1850-1950, examines these motivations, exploring how the lines between reputable medical treatment and “quack cure” were frequently negotiated as newer surgical procedures and technologies redefined, if not reflected, cultural expectations of “normalcy.” As it was difficult to distinguish between the “quack with a scheme” and the “visionary with a theory” promising a permanent cure for hearing loss, deaf persons were portrayed as particularly vulnerable to the clutches of fraud, since once “cured,” they were no longer condemned to the “miserable,” “isolating” state of deafness.

In June, I visited the David M. Rubenstein Rare Books and Manuscript Library at Duke University, a trip made possible thanks to the library’s generous History of Medicine Travel Grant. My research had two aims. First, to examine through the advertising collection in both the History of Medicine collections and the John W. Hartman Center for Sales, Advertising & Marketing History to investigate the cultural history of American advertisements for deafness cures and hearing aids. This research, which will be incorporated into one of my book chapters, “Those Instinctive, Invisible, Improved Aids,” examines how these advertisements embodied the rhetoric of “curability” and what disability scholars refer as “passing”—the masking of disability or infirmity to appear as “normal”—as marketing and sales techniques. Advertisements not only reveal the kinds of technological options available for deafened persons, but enable us to investigate the ways in which deafness was constructed as a stigma and how goods for hearing loss was marketed and sold. Indeed, many adverts propagated the refrain “Deafness is Misery,” addressing the despair and desperation deaf people felt over failed medical therapeutics. They also justified the exorbitant price of goods by connecting to the marvels of electricity and communication.

Secondly, I hoped to uncover (hidden) stories of deaf persons or persons with (temporary) hearing loss, and whether they attempted any treatment(s) for deafness. This was a more challenging task, but a good place to start was the collection of recipe books/receipt books in the History of Medicine collection. Some of these books were written by physicians and surgeons, who kept tally of the treatments they advised to their patients. For instance, I came across the receipt book of John Kearsley Mitchell (1793-1858), which lists a treatment for deafness:

By the way, I had a difficult time comprehending Mitchell’s writing—so I did what any historian fluent in social media would do: I asked my twitter followers to help me decipher the text!

Another receipt book, this time belonging to Dr. William R. Blakeslee, a civil war surgeon, contains a list of prescriptions the surgeon recommended while stationed at Camp Muhlenburg with the 48th Regiment of the Pennsylvania State Militia (near Scranton) during August 1863. Blakeslee provides details for various soldiers’ treatment(s) and his prescribed remedy, but in the case of Private William Workeizer (?) who suffered from otitis, there was no remedy listed. Does this mean that Blakeslee did not provide a treatment? Or that there was no remedy for otitis that would help the private?

There are also recipes for ear ailments written in home recipe and remedy books. One from 1896 copies a recipe from “Farmer’s Friend” for earache: “A remedy which never fails is a pinch of black pepper gathered up in a bit of cotton batting wet in sweet oil and inserted in the ear. It will give immediate relief.”

I came across many more examples, far too many for this blog post. I’d like to share one more, a letter that was out of place in the Eva Parris Letters (1892-1909) collection, written by a Virginia P. Dean of Montgomery, to G.H. Branaman of Kanas City, on July 10, 1909. In the short, carefully written letter, Dean thanks Branaman for his “cure,” which left her hearing “as good as it ever was,” and promises to recommend his method for anyone else afflicted with catarrhal deafness. This was a tremendous find for me: Branaman established the Branaman Medical Institute, which was notoriously exposed in the 1910s by the U.S. Post Office for its mail-order fraud and quackery in delivering deafness “cures.” His deafness treatment was a strange combination treatment, which made use of a special nostrum medicine and the use of his “electro-magnetic head cap.” Used properly, Branaman claimed his method could cure even the most incurable cases of deafness—or your money back! He was eventually charged with four counts of fraud and eventually put out of business.