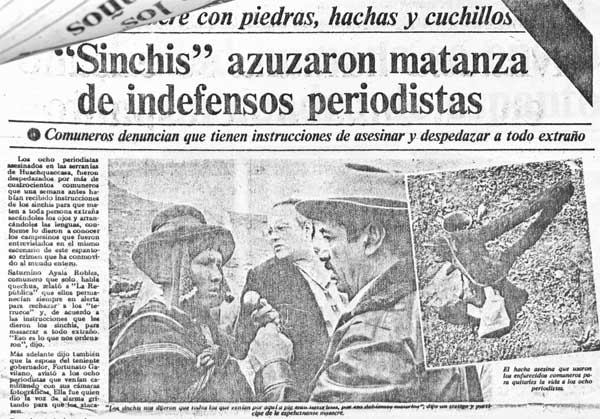 I am Carmen Valdivieso Hulbert, a New York-based journalist-filmmaker born in Peru. I am currently co-directing and producing Uchuraccay, an investigative, human rights documentary for my company, Quinoa Films Inc.

The documentary attempts to find answers related to the assassinations of eight journalists and their guide in 1983 in Uchuraccay, a hamlet in the Andes of Peru. The murders occurred amidst warfare between the Maoist group, Shining Path, and Peruvian military forces. As part of my investigation of the case, I found valuable material among the Coletta Youngers Papers at the Human Rights Archive in the David M. Rubenstein Rare Book & Manuscript Library.

In the process of this ten-year investigation, I have found a large amount of information which at first did not stand out due to the complexity of the case. In February 2015, I found a copy of the original report on the assassinations filed by the government-appointed investigative commission in March of 1983. The group was led by Peruvian writer Mario Vargas Llosa. According to the commission’s findings, the villagers of Uchuraccay were the sole culprits of the murders. Furthermore, the report fails to cite any military presence in the area when the murders took place.

This report was based on testimony given to the commission by the military chief of Ayacucho, the capital city of Huamanga Province, where Uchuraccay is located. He stated that the last military flight to the area took place on Sunday, January 23, 1983. His testimony conflicts with information I found in an article published on January 27th of the same year in the leading newspaper, El Comercio. The article, based on information received from the same military headquarters, indicates that a group of military and police officials arrived in the area from Lima on January 26th. Around noon, the group visited Uchuraccay, among other areas. This was the very day that the journalists arrived in Uchuraccay and were allegedly murdered around 4 p.m.

The discrepancy only hit me after I found and read the investigative report this past February. Had I not found this particular document in the Coletta Youngers Papers, it would have taken me longer to connect the dots.

A friend I met on my last trip to Lima in January of 2014 had mentioned that Javier Azcue, the journalist who wrote the story in El Comercio, had told him about the importance of that visit, and that no journalist had taken note of it. I was not sure what he was referring to until I re-read the official report at the Rubenstein.

On January 30, 1983, the date of the exhumation of the eight journalists’ bodies, villagers in Uchuraccay told a journalist who spoke Quechua, one of the main Peruvian indigenous languages, that the soldiers had told them to kill any stranger who arrived in the community on foot, and that they should remove their eyes and cut out their tongues while they were still alive. Apparently that did not happen, as indicated by the newspapers clippings I found among the Coletta Youngers Papers. While at the Rubenstein, I found some enlarged newspapers clippings of La Republica that showed close-up photos taken the day the bodies were exhumed. The photographs show the faces of five of the eight murdered journalists. As gruesome as these images are, they show two of the journalists with eyes half-closed and intact, and three with their eyes closed but without signs of having been removed, as some of the villagers had previously stated.

Previously I had only heard the recordings of the villagers’ testimonies in their native Quechua, along with a transcript translated into Spanish. I was therefore able to recognize one of the villager’s photo and name in the newspaper clipping.