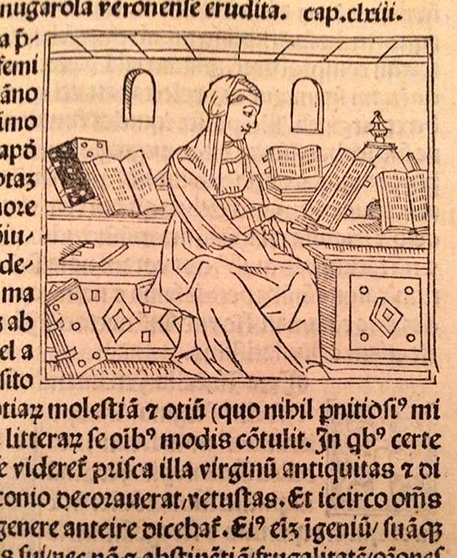 The David M. Rubenstein Rare Book & Manuscript Library at Duke University has acquired one of the largest and most significant private collections on women’s history, documenting the work and intellectual contributions of women from the Renaissance to the modern era.

Carefully assembled over 45 years by noted bibliophile, activist and collector Lisa Unger Baskin, the collection includes more than 8,600 rare books and thousands of manuscripts, journals, ephemera and artifacts, including author Virginia Woolf’s writing desk.. Among the works are many well-known monuments of women’s history and literature, as well as lesser-known works produced by female scholars, printers, publishers, scientists, artists and political activists. Taken together, they comprise a mosaic of the ways women have been productive, creative, and socially engaged over more than 500 years. The collection will become a part of the Sallie Bingham Center for Women’s History and Culture within the Rubenstein Library.

The materials range in date from a 1240 manuscript documenting a respite home for women in Italy to a large collection of letters and manuscripts by the 20th-century anarchist Emma Goldman.  The majority of materials were created between the mid-15th and mid-20th centuries. Other highlights include correspondence by legendary American and English suffragists and abolitionists Susan B. Anthony, Elizabeth Cady Stanton, Emmeline Pankhurst and Lucretia Mott; Harriet Beecher Stowe’s publicity blurb for Sojourner Truth’s Narrative, written in Stowe’s own hand; exquisite decorated bindings by the celebrated turn-of-the-century British binders Sarah Prideaux, Katharine Adams, and Sybil Pye; and Woolf’s writing desk, which the author designed herself.

Baskin and her late husband, the artist Leonard Baskin, were both avid book collectors. Leonard also founded The Gehenna Press, one of the preeminent American private presses of the 20th century. Lisa Unger Baskin began collecting materials on women’s history in the 1960s after attending Cornell University. She is a member of the Grolier Club, the oldest American society for bibliophiles.

“I am delighted that my collection will be available to students, scholars and the community at Duke University, a great teaching and research institution,” Baskin said. “Because of Duke’s powerful commitment to the central role of libraries and digitization in teaching, it is clear to me that my collection will be an integral part of the university in the coming years and long into the future. I trust that this new and exciting life for my books and manuscripts will help to transform and enlarge the notion of what history is about, deeply reflecting my own interests.”

Materials from the collection will be available to researchers once they have been cataloged. Some items will be on display in the renovated Rubenstein Library when it reopens to the public at the end of August 2015.