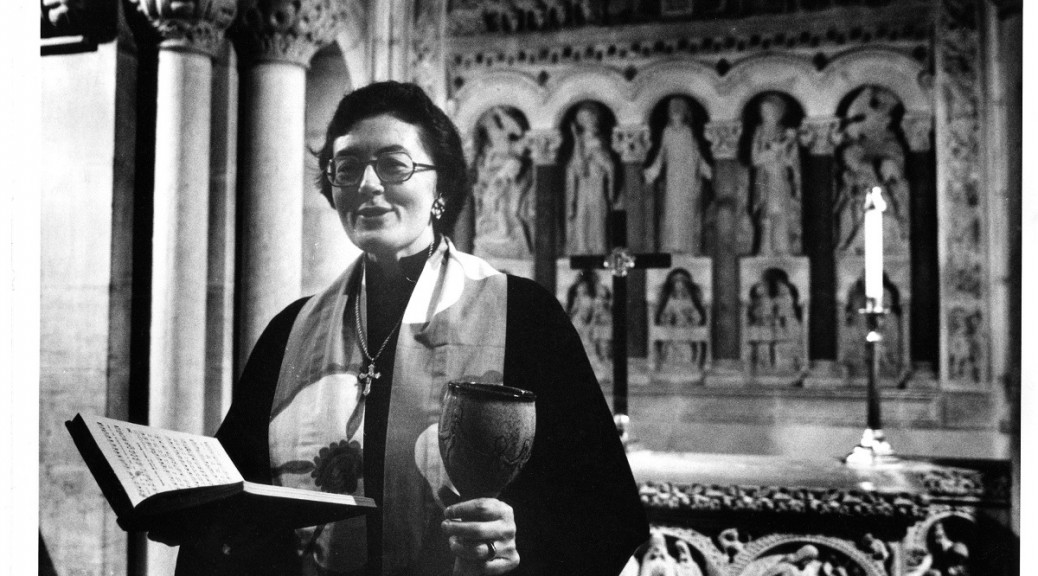 Since August of 2014 I’ve had the pleasure of arranging and describing the papers of Reverend Jeanne Audrey Powers. In 1958, Rev. Powers became one of the first women to be ordained in the United Methodist Church, and in 1995, she publicly came out as a lesbian in her most famous sermon, “The Journey.” The reactions she faced as a result of coming out were mixed. Many, like the GCCUIC (General Commission on Christian Unity and Interreligious Concerns) supported her unswervingly, while others, most notably the Institute on Religion & Democracy, campaigned against her, hoping to force Powers into an early retirement.

Reverend Powers was involved in organizing the Re-Imagining Conference, the Minneapolis interfaith conference of clergy, laypeople, and feminist theologians that stirred controversy in U.S. mainline Protestant denominations. “Re-Imagining: A Global Theological Conference By Women: For Men and Women,” grew out of a response to the World Council of Churches’ Ecumenical Decade: Churches in Solidarity with Women 1988–1998. The conference aimed to encourage churches to address injustices to women worldwide and promote equal partnership with men at all levels of religious life. Participants met at the Minneapolis Convention Center from November 4-7, 1993. It brought together 2,200 people, one third of them clergy, and most of them women. 83 men registered. Attendees represented 16 denominations, 27 countries, and 49 states.

Jeanne Audrey Powers’ papers include planning materials, conference recordings (on cassette tapes, which I hadn’t seen for years!), and material documenting the backlash from the conference by opposing groups. These materials are set aside as their own series to facilitate use by researchers and other readers. The conference also garnered considerable attention from the mainstream media including this 1994 article in the New York Times about the conference and the controversy that erupted afterward.

Rev. Powers’ papers also document her extensive professional accomplishments and contributions as well as her personal history. Photographs from her childhood, stories about her family, and even two locks of hair can be found within the 98 boxes of material. The materials related to Rev. Powers’ activism, including her support for equal treatment for all persons in the church, are my favorite feature of the collection.

For example, the collection includes Rev. Powers’ files associated with the group, Affirmation: United Methodists for Lesbian/Gay Concerns. In 1984, in response to “unwelcoming policies toward lesbian, gay, and bisexual persons,” the group issued a call to local churches to “reaffirm that their ministry was open to all persons, including gays and lesbians.”  The “Open the Doors” campaign was sponsored by the Reconciling Congregation group. The goal was to go to the United Methodist Church’s 1996 General Conference in Denver, Colorado to foster discussion around creating a more welcoming atmosphere in the church for lesbian and gay members. The campaign had a moderate level of success with several hundred people attending “Open the Doors” events at the General Conference.  However, the UMC policies discriminating against gays and lesbians were not changed.

The Jeanne Audrey Powers Papers is a treasure trove of materials that I have greatly enjoyed processing.  It’s hard to believe that they will be ready for researchers to use quite soon—an exciting prospect!