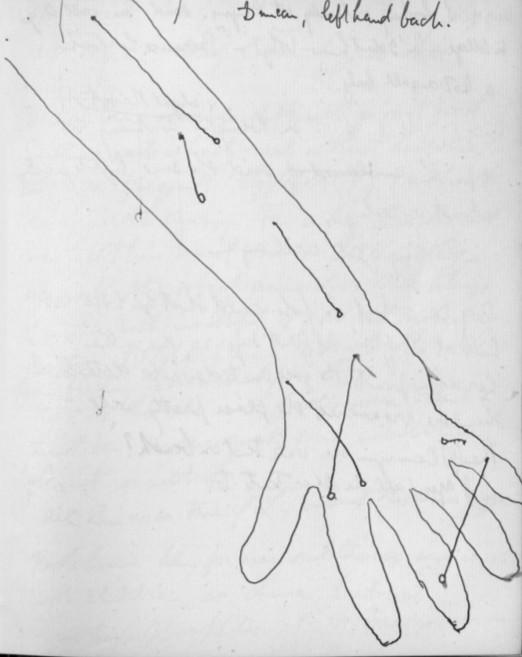 The practice of experimentation on one’s own children belongs to a somewhat queasy tradition in psychology that embraces parenthood as an opportunity for “natural experiment.”  Psychologists throughout the twentieth century have kept tabs on their children’s development, blending the pride of parenthood with the detached methodology of science. So it’s no surprise to find in the papers of William McDougall, the first head of Duke University’s psychology department, extensive notes on four of his children, Angus, Duncan, Janet, and Leslie. Just how the disciplinary practices of psychology in the early twentieth century filtered into McDougall’s child-rearing becomes apparent when comparing the McDougall journals to a contemporaneous laboratory notebook from a psychology student, Walter R. Miles, in the Rubenstein Library’s History of Medicine Collections.

These images depict similar experiments in localizing sensation. The experimenter stimulated a spot on the subject’s hand or arm using a sharp object (Miles used the point of a compass); a few seconds later, the subject had to indicate, either on the actual hand or on a diagram, where he or she believed the point had been applied. The experimenter recorded both points, noting any discrepancy between the actual and perceived site of stimulation. For Miles, this was a bread-and-butter exercise in the methods of scientific psychology.

The McDougall image comes with a twist, since the experimental subjects were his young children. Rather than illustrating basic principles on a standard psychological subject, McDougall was inquiring specifically into the changing sensory and perceptual abilities of his own kids. The diagram of his son Duncan’s hand and arm are part of a record-keeping practice that encompassed everything from the children’s recognition of colors to their fear of bears.

The fact that these methods traveled a fairly direct path from the lab to the McDougall home, and from the “standardized” psychological subject to the developing child, reveals itself in the telling visual differences between the two sets of experimental notes: Miles’s experiment, neatly taken down in a lab notebook, uses ruler-drawn grid lines and a smoothly-traced outline of the hand and arm, while McDougall’s journal bears indications of its setting in the domestic scene of child-rearing: the data is recorded in grid-less, slanted columns, and the outline of the hand is traced hastily, as though the subject was loath to hold still.

Post contributed by Alicia Puglionesi. Puglionesi is a Ph.D. candidate at the Institute of the History of Medicine, Johns Hopkins University. Her dissertation is on “The Astonishment of Experience: Americans and Psychical Research, 1885-1935.” Alicia is particularly interested in the relationship between the amateur tradition in which psychical research developed and the emerging academic discipline of psychology. She is a 2014 History of Medicine travel grant winner.

New Acquisitions: Unique Depictions of the Human Body
SLGs Have Their Roots in Woman's College Experiment
Now We Are Six!