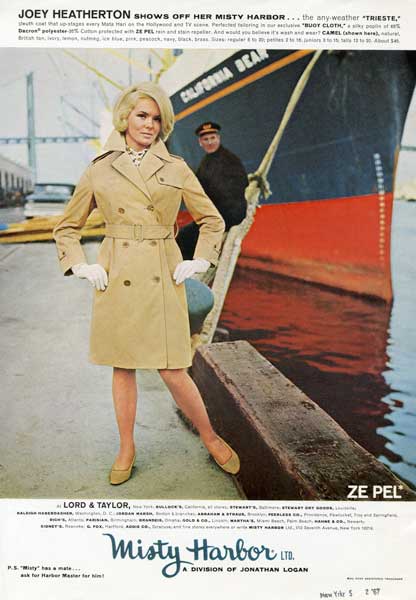 Last night’s episode of Mad Men features several characters whose elevated hopes for connections with others get dashed.  Don flies out to Los Angeles after Megan’s agent calls him to say that she was desperate and demanding with a director after an audition. She is happy to see him, but then gets upset when she realizes why he came.  He is forced to admit that SC&P put him on leave and she asks him to go for being dishonest. Peggy is upset that her St. Joseph’s commercial wasn’t nominated for a Clio, and later finds out that Lou only submitted work that he could claim as his own. Betty meets Francine for lunch and Francine brags about her new career as a travel agent. She tells Betty that working in an office is her reward for raising kids.  Later Betty tells Bobby that she will chaperone his field trip the next day and he is thrilled to spend time with her. Harry exaggerates SC&P’s media capability to the clients from Koss, and later tells Jim that they need a computer to compete. Don meets with two men from Wells Rich Greene and gets an offer to work for them.  Don takes that offer to Roger, who agrees to let Don come back the following Monday. Betty and Bobby have a good time on the field trip until Bobby gives away Betty’s sandwich to a friend. Don arrives at SC&P on Monday morning, and awkwardly greets the staff until Roger comes in around lunchtime. The partners are upset that Don is back, but realize it will cost them too much to fire him officially.  Instead they agree to take him back only if he can adhere to several restrictive rules and reports to Lou. He agrees.

Last night’s episode featured references to typewriters, Kahlua, plaid jackets, and bras, among other things.  Enjoy our selection of highlighted ads that reflect the brands and themes that Mad Men characters interacted with last night. Duke College?
"From Sit-Ins to Hashtags" on Display at Perkins Library
A Cartoon Version of John Hope Franklin