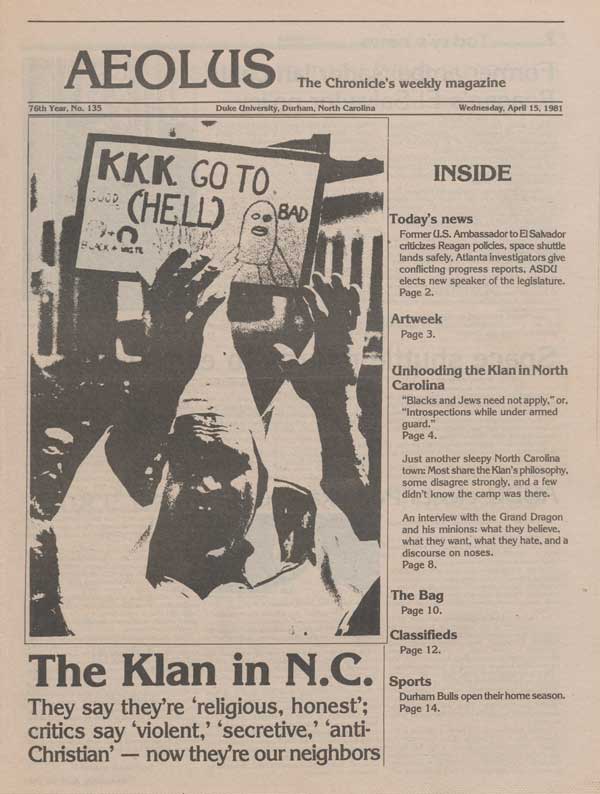 The shocking shootings in Kansas City during the past weekend have brought renewed attention to Glenn Miller (Glenn Cross), a longtime white supremacist with ties to North Carolina. In Monday’s Washington Post, Robert Satloff, Trinity College class of 1983, wrote about his harrowing experience interviewing Miller in 1981 and the Chronicle article that resulted.

The first-hand account, from the April 15, 1981 issue of the Aeolus (the Chronicle’s weekly magazine of the period) is a frightening glimpse into Miller’s mindset. Satloff wrote, “Perhaps I didn’t think that such close-minded, violent, intolerant people still exist. Perhaps I am naïve. I’m not anymore.”

Read the chilling article below. This issue of the Aeolus, and other Chronicle issues from 1980 to February 1989, will soon be added to the Libraries’ Chronicle digital collection.

UPDATE: The April 15, 1981 issue is now available in full in our Chronicle digital collection.

"The Journey" of Reverend Jeanne Audrey Powers' Papers at Duke
What’s Not a Photograph of John Wilkes Booth?
RBMSCL Photos: The Scribe is Here!