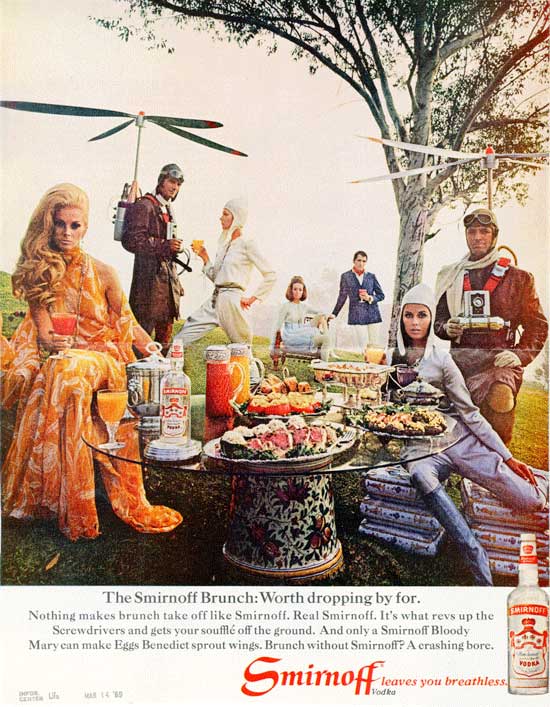 Everyone’s favorite ad men and women are back with Season 7 of Mad Men!  Join the Hartman Center as we look back at some ads that resonate with each episode of the new season in what we call Mad Men Mondays.

The episode begins in January 1969 with freelancer Freddy Rumsen pitching a commercial for Accutron watches to an enthusiastic Peggy. Later Peggy pitches a variation on the same ad to new SC&P creative director Lou Avery and is disappointed when he opts for a blander slogan.

Roger wakes up amongst a group of naked sleeping people on the floor of his messy hotel room when his daughter calls to invite him to brunch. A harried and overworked Ken asks Joan to meet with a representative from Butler Footwear in his stead.  She quickly realizes that Butler’s marketing director intends to move all advertising in-house and dismiss SC&P.

Don visits Megan in Los Angeles for the weekend and they have a series of awkward encounters. Don also meets up with a happy, suntanned Pete, who shows him around the new office and brings him up to speed on SC&P gossip. Peggy and Ted have an awkward exchange when he visits the New York office. Joan meets with a Columbia University business professor to get an analysis of Butler Footwear’s plans.  The professor’s ideas help Joan keep Butler’s account from firing SC&P right away.

Roger’s daughter forgives him for all of his transgressions over brunch, which doesn’t seem to sink in with him until later when he lies down with his lover and another man. Don meets a woman on the plane back to New York and they have a candid conversation about their lives, but he declines her offer of more. Peggy has to deal with her tenant’s toilet problems and is frustrated with her life.