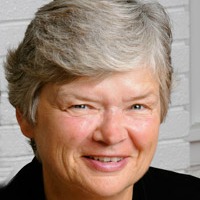 Dr. Mab Segrest, Fuller-Maathai Professor of Gender & Women’s Studies at Connecticut College, received her M.A. and Ph.D. from Duke University, and became active in lesbian-feminist political and cultural work in North Carolina and nationally during the late 1970s and early 1980s. She left the academy in the early 1980s to work full-time in social movements for the next decade. She is a co-founder of North Carolinians Against Racist and Religious Violence, an organization focused on targeting neo-Nazi and Ku Klux Klan activity. Segrest’s 1995 book, Memoir of a Race Traitor, narrates this experience. Segrest’s 2002 book, Born to Belonging: Writings on Spirit and Justice, uses travel memoirs in a search for alternatives to the apartheid of her southern childhood.

She is currently working on a social history of Georgia’s state mental hospital at Milledgeville that grows out of her continuing interest in the interface between the intimate and the historical, specifically what constitutes that redundancy of Southern insanity when viewed through archives of an iconic Southern state hospital. Segrest’s personal papers are held by the Sallie Bingham Center.

This program is the culminating event for the Women’s Studies Senior Seminar, which combines feminist and queer theory with historical research on local activists. Co-sponsored by the Sallie Bingham Center, Durham County Library, and Duke Program in Women’s Studies.

2 thoughts on “Freedom Means Everybody: A Lecture by Mab Segrest”