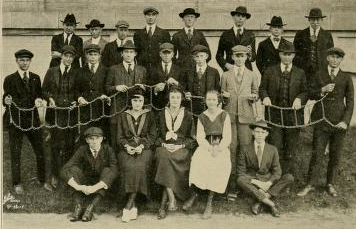 In August of this past year, I was hired as the student assistant for the Duke University Archives. The position is a thrill because it enables me to get paid for a hobby of mine: learning about Duke’s rich and diverse history.

Several of my projects have required me to use the Chanticleer, the university’s yearbook (view digitized volumes!), as a research tool. Scanning through old Chanticleers, it is interesting to observe the transformations in styles of clothes and hair from 1912 to the present day. Additionally, it is interesting to look at students with American history in mind. While researching, I found evidence of students’ mindsets during various points in American history: the world wars; the Jim Crow Era; the integration of Duke; the assassinations of President Kennedy and Martin Luther King, Jr.; Vietnam; Watergate; and 9/11.

The Chanticleer makes it very clear that Dukies of yesteryear—like Dukies of today—enjoy their time at Duke. Duke students have always been dedicated to making Duke a home through involvement in various organizations, academics, and general college fun.

One club that caught my attention as representing the jest of college students was the Hades Club, which existed during the 1920s. The club described itself as, “An organization of ministers’ sons and daughters who have never been caught,” and club members referred to themselves as “imps and impesses.”

The sight of familiar buildings has been most impactful during my research. Amidst all the natural construction that takes place in academia, Duke has remained remarkably unchanged since about 1928. Students throughout the Chanticleer are posed and candidly photographed around West Union, Baldwin and Page, the Plaza, Wallace Wade and Cameron, and the various dorms. These scenes around Duke serve as a link between the eras.

After a semester discovering more Duke history, I now often walk the university’s unchanged pathways and look at its unchanged buildings wondering, “What fellow Dukie was walking these very steps fifty or one hundred years ago? What was on his or her mind that day? What was he or she headed to? Was it the same thing I am going to do now?”

It feels incredible to be part of the Duke legacy.

2 thoughts on “Browsing the Chanticleer”