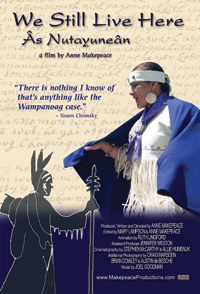 Winner of the Full Frame Inspiration Award, We Still Live Here/ Âs Nutayuneân (TRT 56:00) tells the story of the revival of the language of the Wampanoag people of New England. All speakers of the language had died out when in 1994 Jessie Little Doe, a Wampanoag social worker, began to wonder if it could be recovered.

With M.I.T. linguist Ken Hale, with whom she earned a Master’s degree, she and other linguists pieced the language together from old documents and related Native American languages. Through community-wide efforts among the Aquinnah and Mashpee Wampanoag, the language is being spoken again, and Jessie’s young daughter is the first native speaker of Wampanoag in more than a hundred years.

The screening will be followed by a panel discussion featuring Dr. Liliana Paredes and Dr. Benjamin Frey.

Dr. Liliana Paredes is Associate Professor of the Practice of Spanish and Director of the Duke Spanish Language Program. She holds expertise in the areas of sociolinguistics, minority languages, and Amerindian languages.

Dr. Benjamin Frey is a Fellow in the Carolina Postdoctoral Program for Faculty Diversity at UNC. He completed his Ph.D. in Germanic linguistics at the University of Wisconsin – Madison in August 2013. His research examines language shift among minority communities in the United States from their traditional languages to English, with specific focus on German in Wisconsin and Cherokee in North Carolina. Frey is a member of the Eastern Band of Cherokee Indians.

Rights!Camera!Action is sponsored by the Archive of Documentary Arts and the Human Rights Archive in the Rubenstein Library, the Duke Human Rights Center @ FHI, and the Program in the Arts of the Moving Image.