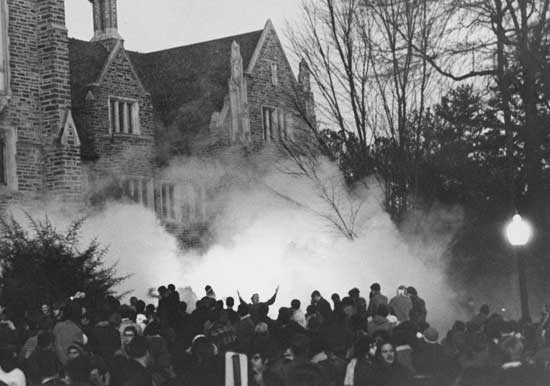 In 2013, Duke University is commemorating the 50 year anniversary of its first black undergraduate students. Events, exhibits, and performances have been taking place over the year, and will culminate during the weekend of October 3-6.

As we reflect on the milestone of integration, we must also consider the challenges faced by African American students at Duke, especially during the 1960s. This upcoming February will mark 45 years since the Allen Building Takeover of 1969. The Takeover was a seminal event in which nearly 100 black students occupied the administrative building for a day, demanding changes to a number of policies. After leaving peacefully, a crowd gathered outside the building confronted police, and teargas was fired on the crowd. A new exhibit on the Takeover, curated by Caitlin M. Johnson, Trinity ’12, is now on display on the first floor of the Allen Building. Thirty panels describe the build-up to the protest, the events of that day, and the outcome of the Takeover. Featuring many images from the University Archives and the Durham Morning Herald and Durham Sun, Johnson’s exhibit forms a powerful narrative about Duke’s path toward real integration.

An opening reception for the exhibit will be held on Thursday, September 12 from 3:30 to 5:00 p.m. in the Allen Building.

At 6:00 p.m. that evening, Dr. Jack Preiss, Professor Emeritus at Duke, will be speaking at the School of Nursing about desegregation at the University. Dr. Preiss was intimately involved in encouraging the Board of Trustees to change its policies on admissions. The University Archives holds a collection of his papers, including this poster from Black Week, which immediately preceded the Allen Building Takeover. Email sharon.caple@duke.edu to RSVP for the Sept. 12 exhibit reception or the talk by Dr. Preiss.