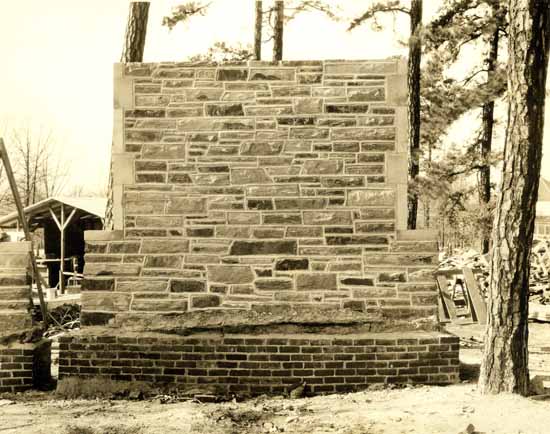 Last week, we watched “Duke Stone” panels going up on the construction fence surrounding the Rubenstein Library and the West Campus Union.  So we thought we’d take a few moments to write about the real Duke Stone!

Did you know that Duke Stone comes from a quarry in Hillsborough, North Carolina, just about 10 miles away from campus?  Or that there are 24 distinct colors in the stone: 7 primary colors with 17 distinct variants of the primary colors?  Or that, before choosing the Hillsborough stone, there were several other stone contenders?

Before the Hillsborough stone was chosen to construct West Campus, and before it was known simply as “Duke Stone,” the architects, designers, builders, and James B. Duke himself looked at many different stone samples.  They even constructed test walls of stone from other quarries on the East Coast to determine which one they liked the best.  Here’s one of the test walls constructed during that phase: And in this October 15, 1925 photo of construction on East Campus, the test walls are visible off in the distance. It’s safe to say that we all know and love Duke Stone today—so much so that the panels are going up on the construction wall so that we don’t have to be without the look of it for too long.  Next time you’re on campus, see how many primary and variant colors you can find in the stone. Let us know how you do!