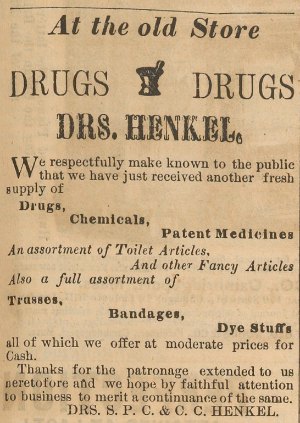 The Medical Center Library & Archives is excited to announce its new exhibit, “The Henkel Physicians: A Family’s Life in Letters.” Produced by the National Library of Medicine (NLM), the exhibit traces the daily lives of a family of physicians in the Shenandoah Valley during the nineteenth century, serving in their community, on the battleground, and in the nation’s courts of law.

The Medical Center Library also collaborated with the Rubenstein Library on an exhibit to complement the NLM display. “From the Rubenstein Collections: The Henkel Family Physicians” features rare books and manuscripts along with materials from the History of Medicine Collections.  It includes letters written by the Henkels, books and broadsides published by the Henkel Press, and nineteenth-century medical instruments and artifacts.