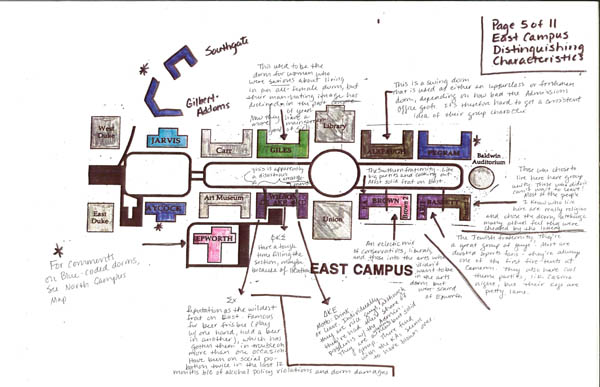 This spring I assisted my supervisor in processing the Duke Student Government (DSG) Records. One day he called me over to look at a report he had found called “A Color-Coded Guide to Campus Living Groups.” Prepared in the summer of 1992 by Adrianne G. Threatt, this report truly was colorful. It was divided in two parts with maps of the campus living groups on Main West Campus, Edens Quadrangle, East Campus, and North Campus. Part II was straightforward, with four maps showing the approximate number of residents per living group. But Part I showed the same four maps with hand-written commentary about the “distinguishing characteristics” of each living group. Looking at these comments reminded me of my own experience with Duke dorms and their “distinguishing characteristics.”

One day shortly after my freshman year began, I walked into my dorm, Giles, to find all my friends crowded around a single laptop. My roommate was pointing to the screen animatedly, so I stopped to see what all the girls were looking at: it was a list of all the dorms on East Campus, with blurbs about the reputations of each. Giles, it said, was “home to pretty girls who like to have a good time.” Being freshmen, we of course knew everything on the internet is true: we all must have been placed in Giles because the all-knowing, all-seeing Duke housing lottery deemed us pretty girls who liked to have a good time.

Seeing the color-coded maps, then, I was eager to find out the “distinguishing characteristics” for Giles in 1992. According to the guide, Giles was “the dorm for women who were serious about living in an all-female dorm, but their man-hating image has declined in the past couple of years. Now they have a more main-stream group of girls.” To say the least, a far cry from what my friends and I had read 18 years later, in the fall of 2010.

What else had changed about East Campus? The first thing I noticed was that East was not an all-freshman campus. There were fraternity sections, for one thing, and “swing dorms,” which were used as either upper-class or freshman dorms.. In Wilson, there were three fraternity sections—ΣX (Sigma Chi), ΦKΣ (Phi Kappa Sigma), and ΔKE (Delta Kappa Epsilon)—which the author of the maps noted as “apparently a disastrous arrangement.” The “artsy dorm” in 1992 was Epworth, whereas Pegram had that title by my freshman year. Half of Bassett in 1992 was AEΠ’s (Alpha Epsilon Pi) section and the people who chose to live on the other half of Bassett were described as having “group unity” and as being “really religious.” I have only known Bassett as the dorm where all the basketball players lived.

Despite all these changes, many things have stayed the same. In 1992, KA’s (Kappa Alpha) section was in half of Brown; the author described KA as “the Southern fraternity,” who likes “big parties and cooking out.” This reputation holds true today. AEΠ was known as “the Jewish fraternity” and as a “great group of guys” who had “cool theme parties, like Casino night, but their kegs are pretty lame.” AEΠ is still the Jewish fraternity and still considered to be a great group of guys who have fun parties. As to their current kegs quality—no comment.

Being at Duke is exciting because the history that is everywhere makes us feel like part of a much bigger legacy. Yet, we are still able to make that legacy our own. This is why we see both reputations that persist through the years and reputations that constantly change. I would be interested to hear how other students and alums feel about Duke’s “distinguishing characteristics” over the years.

Do you see your Duke in the color-coded guide to the Duke of 1992?

UPDATE: The Duke University Archives has added the three other maps of campus living groups to their Flickr photostream. Here are the maps for West Campus, Edens, and North Campus!

Construction Begins on the Temporary Rubenstein Library
An Investigation into Rubenstein LOLcats
Here's a Few Ways to Learn Duke's History!

9 thoughts on “Student Takes on Living Groups, 1992 and Now”