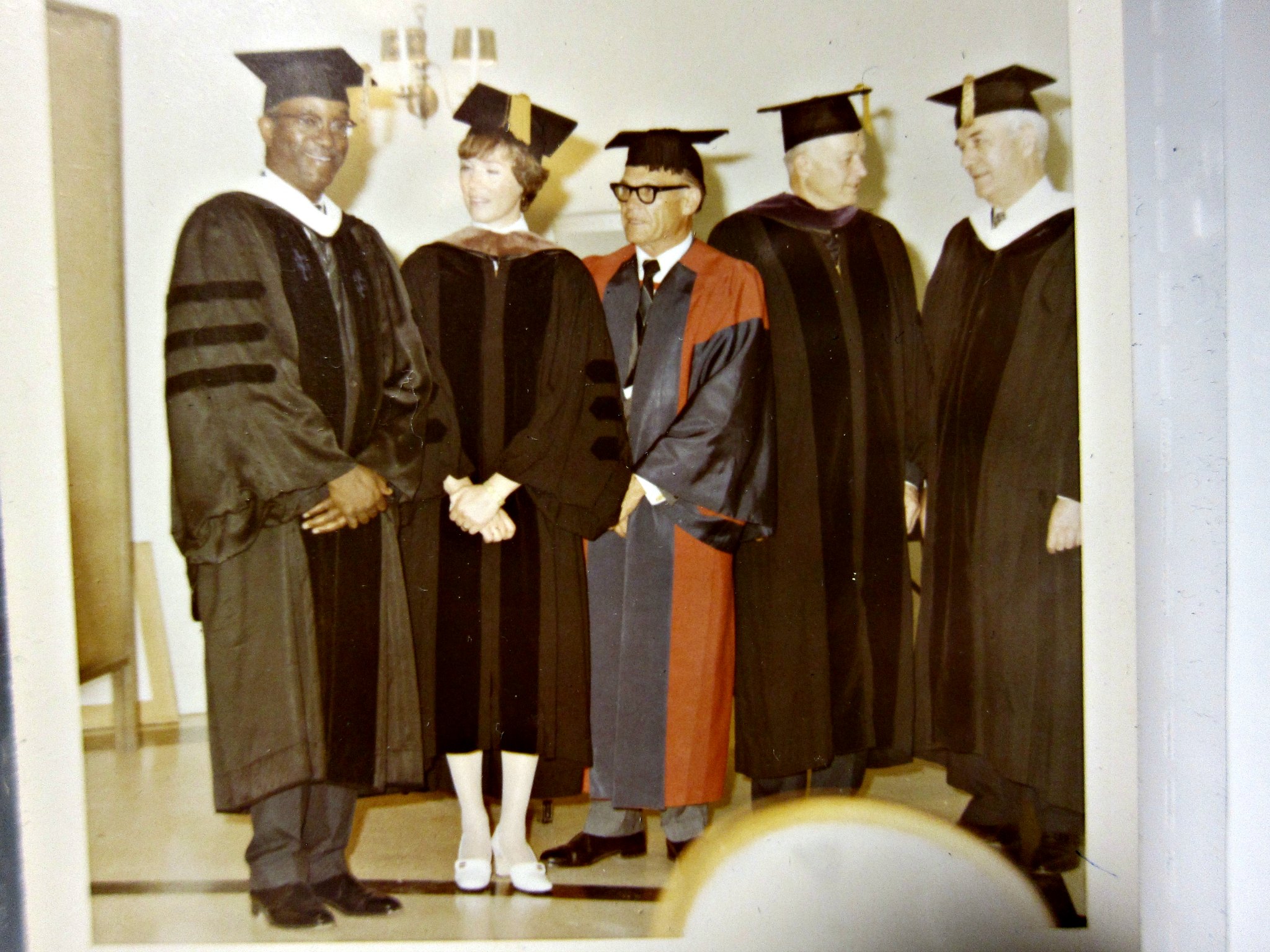 One of the most interesting batch of records I’ve worked with in the ongoing processing of the John Hope Franklin Papers are the Honorary Degrees, a subseries of Franklin’s Honors and Awards. In the course of his life, Franklin collected over 130 honorary degrees from colleges and universities all over the United States. Franklin appeared to cherish these awards, never turning one down unless it conflicted with a pre-existing engagement. By the 1970s and 1980s, Franklin’s weekends in May and June were booked — so booked that he would occasionally receive one degree on a Saturday, and another on a Sunday. Franklin also delivered the commencement addresses at many of these ceremonies, sometimes serving as the school’s first African American commencement speaker.

There is more to this series than a bunch of diplomas (although there are plenty of those, too). The pomp and circumstance occasionally overshadow the tense relationships between historically white university administrations and the growing numbers of African American faculty and students campaigning for civil rights in the United States. For example, before receiving his honorary degree at the University of Maryland (alongside Mary Poppins herself, Julie Andrews), Franklin was contacted by the campus’s Democratic Radical Union of Maryland and informed that the campus was still “effectively segregated” and under “virtual Marshall law.” The group of about 50 faculty urged him “not to help the administration at Maryland legitimize their power by taking part in one of their ceremonies on their terms, but rather to attend and stand with us against the political and racial repression that exists at this university” (telegram, June 3, 1970). Franklin went ahead with the ceremony, much to the frustration of the DRUM. He was the school’s first black honorary degree recipient.

Franklin’s honorary degrees also reveal the wide-sweeping connections he established over the course of his life in scholarship. Many of his early honorary degrees were from historically black colleges, allowing him to further engage with leaders of the civil rights movement. In 1960, Franklin delivered the commencement address at the Morgan State ceremony that honored both him and W.E.B. Du Bois with honorary degrees, shortly before Du Bois moved to Ghana. This was only one of several occasions when the two men interacted with each other. In 1961, Franklin received an honorary degree from Lincoln University at a commencement addressed by Martin Luther King, Jr. He later joined King on the march to Selma.

Later degrees attest to the random connections and coincidences of academic life. For example, at the Yale commencement in 1977, Franklin was honored alongside President Gerald Ford and musician B.B. King. He received his 1970 honorary degree from Columbia University with Arthur Burns, an economist and former chairman of the Federal Reserve whose papers are held at Duke. A 1984 ceremony at the University of Connecticut honored him alongside Marian Anderson, celebrated contralto.

I was curious how John Hope Franklin’s 130+ degrees compared to other honorary degree holders — so I did some online searching. Most people come nowhere close to Franklin. Sir David Attenborough, scientist and documentary filmmaker behind the epic Planet Earth series, holds the record in the United Kingdom for the most honorary degrees: 31. Maya Angelou, U.S. Poet Laureate and one of Franklin’s close friends, has also received over 30 honorary degrees. Two Nobel Peace Prize winners come closer to Franklin’s total: the Dalai Lama has received at least 70 honorary degrees, including two last month from the University of Maryland and Maitripa College. Another Nobel laureate, Elie Wiesel, cannot remember how many honorary degrees he’s received, but reckons they number over 100. But, lest you think we have a record-holder at the Rubenstein, Franklin’s degrees pale in comparison to Daisaku Ikeda, a Buddhist philosopher and educator who has received over 300 honorary degrees and professorships from universities and colleges around the world. One can only imagine what Ikeda’s weekends look like.

Bringing Radio Haiti Home, One Step at a Time
Seen and Heard in the Rubenstein Library - The Emancipation Proclamation
Coming Out and Going Out Since 1940