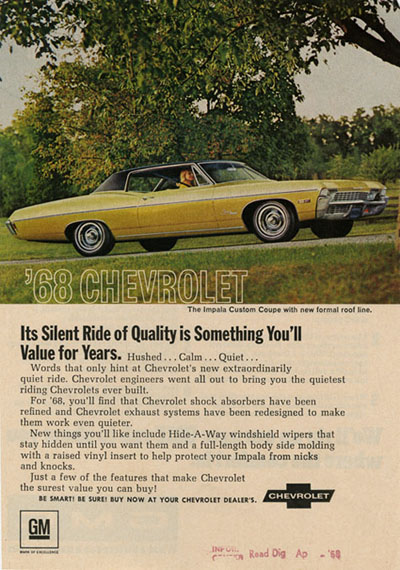 The Chevy executives in Detroit aren’t happy with any ad campaigns the merged agency is submitting. Don asks them to work all weekend to come up with new ideas for Chevy. After talking with Sylvia, Don begins having flashbacks of being a teenager in the brothel with his stepmother. Jim brings in his doctor to “fix everyone up” and gives some staff an energy serum shot, guaranteed to give 1-3 days of uninterrupted creative focus and energy. The energized creatives are unable to focus, leaving Peggy and Ginsberg frustrated with their frenetic, but useless, work. Don asks Peggy to find a soup ad in the archives to inspire them for the campaign. Don’s thoughts are more focused on a pitch to win Sylvia back, rather than to persuade Chevy.

Sally babysits her brothers at Don’s apartment while he works and Megan is at a dinner. Awakened by sounds from the dining room, Sally walks out to find an African-American woman rummaging through the cupboards. She tells Sally she raised her dad, but she’s actually a thief. Finally returning home, Don finds the kids, Megan, Henry, Betty (back to a blonde), and the police in his apartment. He promptly faints. The episode ends with Don reassuring Sally the robbery was not her fault, and Don telling Ted to call him in 1970 when Chevy is ready to make an ad.

Episode eight’s plot referred to Admiral radios, Chevy Impala, tuna salad, soup, and gold watches, among other things. Enjoy our selection of ads and images that illustrate some of the products and cultural references mentioned in last night’s Mad Men. A gallery of our highlighted images may also be found on Pinterest and Flickr.