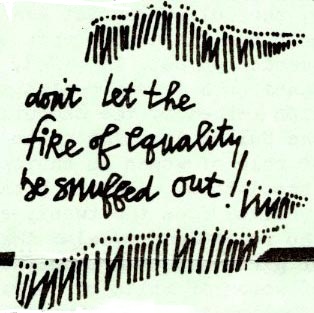 With generous assistance from a 2012 Mary Lily Research Grant, I visited the Sallie Bingham Center for Women’s History and Culture this past summer to conduct research for my dissertation, “The Spiritual is Political: How the Southern Baptist Convention Debated Feminism and Found the New Right.”

I focused primarily on records in the Resource Center for Women in Ministry in the South collection.  The Resource Center was founded by Jeanette Stokes in 1977 to provide support for women who were in ministerial leadership roles.  Its extensive archival records at Duke University include back issues of its publication, “South of the Garden,” materials from its annual “Women in Ministry in North Carolina” conferences, and the newsletters and paraphernalia of affiliated religious organizations.

In my examination of the Resource Center files, I came across an interesting collection of newsletters for Southern Baptists in North Carolina who supported feminism in the 1970s and 1980s.  These newsletters were produced by “Southern Baptists for the Family and Equal Rights,” or SBFER, an organization formed in 1981 to create support for the Equal Rights Amendment and issues related to women’s health and welfare in the North Carolina Baptist Convention and in state politics.SBFER was short-lived, lasting less than five years. Though it failed to attract considerable support in the national denomination, it enjoyed limited success as a local organization.  After its efforts to promote the ERA in the state were unsuccessful and the deadline for ERA ratification came and went, the organization turned its focus to women’s ordination and other expressions of feminism in the Southern Baptist Convention.  After 1985, however, the organization began to decline as it became clear that the denomination was not returning to a moderate course.The SBFER’s newsletters are crucial for my dissertation as they provide evidence of grassroots feminism within the Southern Baptist Convention at a time when the denomination was reversing course on many issues regarding gender equality, in full retreat from moderate positions it had taken in the 1970s.  These materials from the early 1980s reveal strong dissenting views, which complicate the narrative of the Southern Baptist Convention’s right turn on social issues.  SBFER aimed to throw a wrench in the plans of the denomination’s new conservative leaders. And while they were unable to stop the Southern Baptist Convention from aligning itself with the Religious Right, they did succeed in keeping women’s issues part of denominational dialogue in the 1980s.

One thought on “The Spiritual is Political”