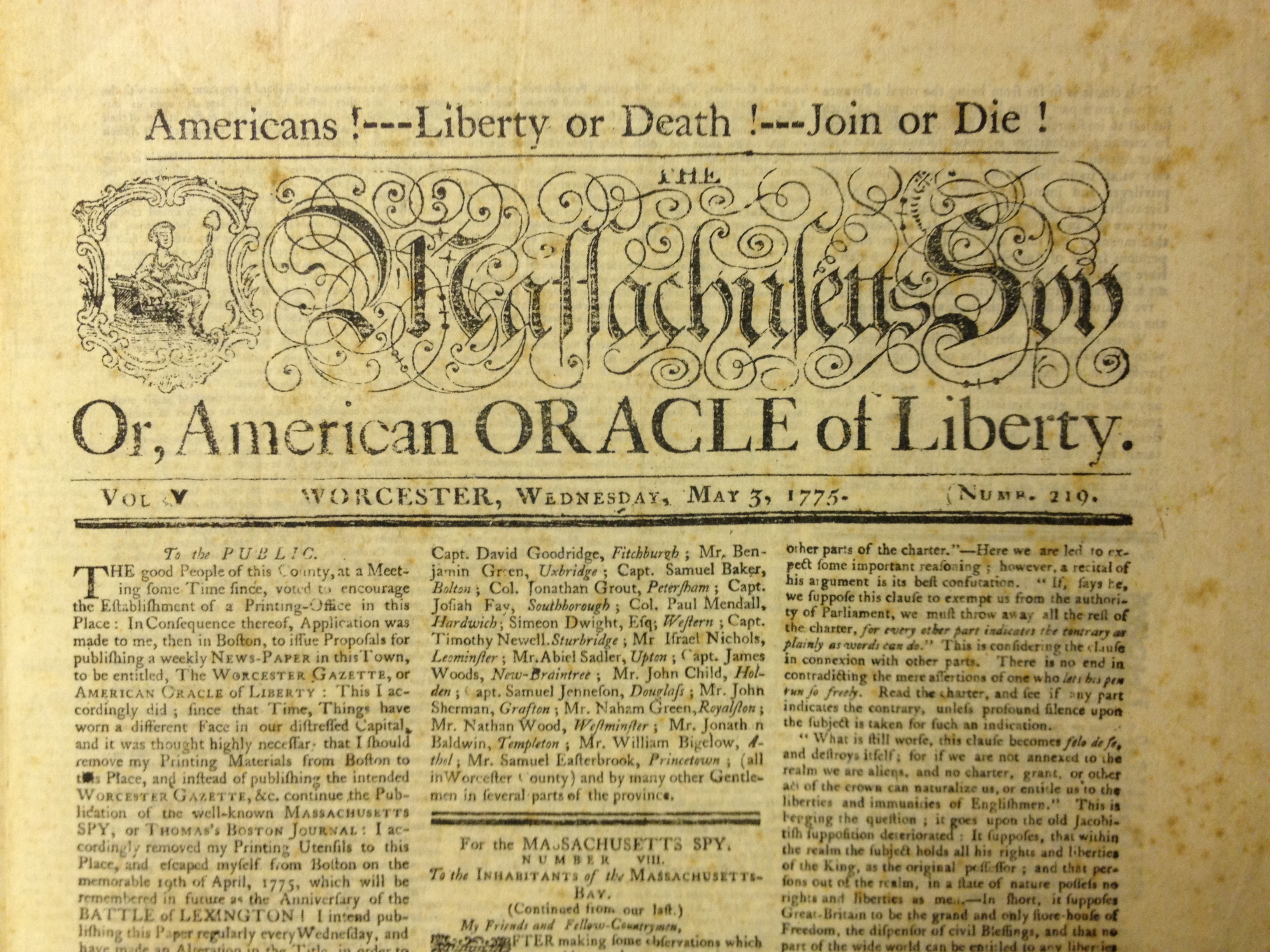 Among the many treasures of the Rubenstein Library is an impressive collection of nearly 3,000 historic American newspapers. As part of our major renovation project, these items along with all our collections are being physically prepared for their impending move. In the case of the newspapers, this is a particularly daunting task. Large in scale, centuries old, sometimes folded, and typically preceded, superseded, and sometimes paralleled with alternative titles, it is often difficult to know what goes together and in what order. While such changes in title and places of publication can befuddle those of us working on rehousing the collection in appropriate order, they sometimes offer remarkable clues about America’s history.

Take, for instance, the Massachusetts Spy. Begun by Isaiah Thomas in 1770, it was the first American newspaper geared toward the middle class.  While an average newspaper of the time might have 400 subscribers, Thomas grew the circulation of his paper to more than 3,500. An adamant patriot with close connections to John Hancock, Paul Revere, and other Sons of Liberty, Thomas used his paper to broadcast anti-British views and inflame the colonists to action. The British considered Thomas so dangerous that his name was on the list of twelve people to be summarily executed if captured.

The last edition we have of the Mass Spy published in Boston is issue number 217 published on March 30, 1775, less than a month before the Battle of Lexington.  Subtitled Thomas’s Boston Journal, Thomas included a version of Benjamin Franklin’s “Join or Die” cartoon in the paper’s masthead. The paper next appears in Worchester, under a new title—The Massachusetts Spy, Or, American Oracle of Liberty—and with a new masthead—this one proclaiming in large letters “Americans!—Liberty or Death!—Join or Die!” While changes in newspaper titles and places of publication are common, the significance of this one cannot be overstated.  With tensions rapidly escalating in Boston, and with Thomas on the British’s most wanted list, the printer waited until the last possible moment to smuggle his press and himself out of heart of the controversy and to the relative safety of Worchester, some forty miles west of Boston.  And, when he printed his first issue of the newly reconstituted paper on May 3, 1775 he deliberately changed the subtitle and masthead to reflect the nature and urgency of his message.

On the paper’s front page, Thomas gave his own account of the dramatic events that unfolded in prior weeks: “I accordingly removed my Printing Materials from Boston to this Place, and escaped myself from Boston on the memorable 19th of April, 1775, which will be remembered in future as the Anniversary of the Battle of Lexington!” He devotes much of the issue to firsthand accounts of the battle, the first published: “Americans!  Forever bear in mind the Battle of Lexington!—where British Troops, unmolested and unprovoked, wantonly, and in a most inhuman manner fired upon and killed a number of our countrymen, then robbed them of their provisions, ransacked, plundered and burnt their houses!  nor could the tears of defenceless women, some of whom were in the pains of childbirth, the cries of helpless babes, nor the prayers of old age, confined to beds of sickness, appease their thirst for blood!—or divert them from their DESIGN of MURDER and ROBBERY!” Given the rarity of this issue with its firsthand accounts of the very first battle of the American Revolution, I was surprised to discover that there are two copies in the Rubenstein Library’s newspaper collection.  A further curiosity is that each is signed by Thomas in the lower left-hand corner.

Closer inspection reveals that the signature is photo-mechanically reproduced, a technology not available in 1775. Both our copies are in fact facsimiles reproduced from Thomas’s own copy which resides at the American Antiquarian Society in Worchester, the nation’s third oldest historical society which Thomas founded after he retired as a printer and editor. The facsimiles were most likely produced in 1876 in celebration of the country’s centennial.

The fact that our copies are facsimiles produced more than 125 years ago is fascinating in its own right, and tells us something about the history of how this country has celebrated anniversaries. I do not know yet how these two copies will be boxed and foldered with other original issues from the Mass Spy; but, I do know that our newspapers will be ready to move out of Perkins in time for the renovation — just like Thomas was ready to move out of Boston in time for the Revolution.

Post contributed by Kat Stefko, Head of the Technical Services Dept. in the Rubenstein Library.

One thought on “The British Are Coming! The Printer is Leaving!”