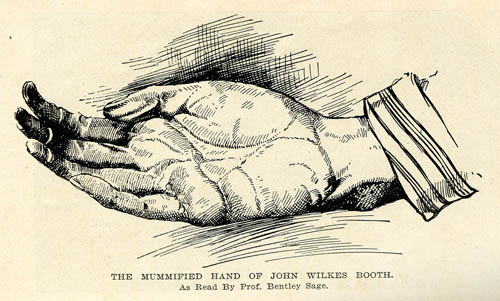 On this day in 1865 the infamous John Wilkes Booth, assassin of President Abraham Lincoln, died of a gunshot wound on the porch of the Garrett home in Virginia after twelve days on the lam.  Or did he?

What if I told you that Booth was actually a tobacco merchant in east Texas in 1873?  Or that he was a Shakespeare-quoting house painter in Enid, Oklahoma in the early 20th century?  And that one could view his mummified remains at various circuses after the First World War?  Crazy, right?

Not according to Finis L. Bates, a lawyer from Memphis, TN, in his 1907 confessional, The Escape and Suicide of John Wilkes Booth.

According to Bates, John St. Helen, a merchant in Granbury, TX, confessed his true identity while suffering from an illness to which he supposed he would eventually succumb. After his unexpected recovery, St. Helen elaborated on his confession to Bates and offered additional details of the conspiracy to assassinate Lincoln. The most explosive of these was the originator of the assassination plot, Vice-President Andrew Johnson. He also offered the true identity of the man mortally wounded by a Federal soldier at the Garrett farm. Bates immediately notified the State Department and Department of Defense but his pleas fell on deaf ears (conspiracy, anyone?).

In 1903, a house painter from Oklahoma named David E. George, committed suicide with a fatal dose of arsenic. Among some papers found on George was a note requesting that Bates be summoned. Upon his arrival several days later, Bates was able to identify the deceased George as his friend from Texas, John St. Helen, nee John Wilkes Booth. After claiming possession of the body, Bates then toured mummified remains around the United States, and, eventually, even offering for purchase to Henry Ford.

Come to the Rubenstein Library and read this true account of the life and death of John Wilkes Booth. Conspiracy theorists welcome!

A Cylinder from ‘On the Square’
Rights! Camera! Action!: Wetback
In the Lab: Scrapbooking for Victory, Part Two