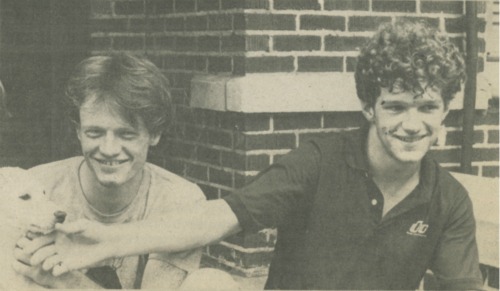 On March 30, 1984, he was a Trinity senior, premiering his and classmate Jeff Bennett’s feature-length film, Darkmoor, at the Bryan Center. Supported by Freewater Films, the film was his senior thesis and ended up requiring a budget of $60,000, owing in part to the fact that three-quarters of the film had to be re-shot after the lead actor graduated and wasn’t able to complete his final scenes.

In interviews, Mr. Harris describes the film only as a “psychological thriller.” There’s an orphaned boy who shows up just at the right moment and a father who doesn’t. There’s a Bryan Center art show with a painting by Picasso and a psychiatric ward somewhere in Duke Hospital. There are references to Carl Jung’s theories and T. S. Eliot’s poetry (Harris’ Program II curriculum included English literature classes), as well as so many hints at the power of advertising and subliminal messages that we  wonder if Harris knew where he’d end up 28 years later.

Reviews from The Chronicle and the Durham Sun suggest that Sanford proved quite the capable actor, but we can’t offer our own opinion, because the Duke University Archives doesn’t have a copy of the film. The records of the Duke University Union contain only a not-quite-final draft of the script that suggests that Darkmoor Shaw, the film’s main character, started out as Darkmoor Kilgore.

Here’s the scene, early in the film, where Darkmoor acquires his first name.

Alex is on the lawn with her child, who is crawling around in front of her. She picks the child up, sets him on the ground in front of her, and gives him a little push. The child waddles off away from the mother. Alexandra starts to call names after him.

The child turns around and looks inquiringly at his mother.

The child starts to crawl to his mother. She goes over to him and picks him up.

“What a strange name to choose for yourself, you funny little fellow, but I like it. Alright, then, Darkmoor it is.”

According to Mr. Harris, the idea for this scene came from his (late) father, Richard Harris, the venerated British actor. With such an impressive pedigree, we’re relieved that a copy of the script exists in the Duke University Archives. And Mr. Harris, if you still have a copy of the film, could we please borrow it?

And, for those of you who can’t get enough Mad Men, watch The Devil’s Tale over the next few weeks for news about the next event in the John W. Hartman Center for Sales, Advertising & Marketing History’s 25th Anniversary Lecture Series. On April 10th, the center will be welcoming Charlotte Beers, former Chairman/CEO of Ogilvy & Mather and Under Secretary of State for public diplomacy and public affairs. Find more information on the Hartman Center’s homepage!