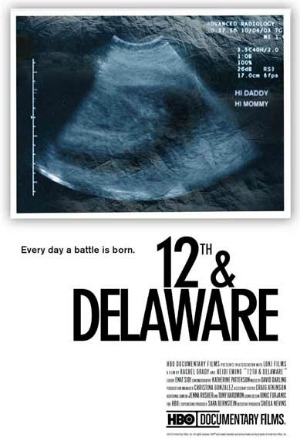 12th and Delaware takes its name from an intersection in Fort Pierce, Florida, where an abortion clinic named A Woman’s World sits across the street from the pro-life Pregnancy Care Center. Pregnant teenagers and women often mistake the pro-life center for the abortion clinic, and are patiently and persuasively counseled by its staff, often with deceptive tactics, to keep their pregnancies. Meanwhile, the medical staff of the clinic try to counsel patients to make their own choices and to perform their work as pro-life protesters walk the sidewalk in front of the clinic day and night. Turning a non-judgmental lens on both camps, filmmakers Rachel Grady and Heidi Ewing use the extraordinary access they gained to practitioners, protestors, and patients to show us a conflict with seemingly no possible resolution.

The screening will be followed by a discussion panel. Heidi Ewing has been making critically acclaimed documentary films and television programs with co-director and -producer Rachel Grady for over ten years. Their film Jesus Camp, a candid look at Pentecostal children in America, was nominated for a 2007 Academy Award for best documentary feature. Two years earlier, The Boys of Baraka, about a group of “at-risk” pre-teens from Baltimore who attend an experimental boarding school in Kenya, was nominated for an Emmy. 12th and Delaware premiered at the 2010 Sundance Film Festival and, among other honors, won the Kathleen Bryan Edwards Award for Human Rights at the 2010 Full Frame Documentary Film Festival.

About Rights! Camera! Action!: Featuring award-winning documentaries about human rights themes from Durham’s annual Full Frame Documentary Film Festival, the series explores issues ranging from the immigration and refugee rights to the justice system and the environment. All films featured in the series are archived at the Duke Library and are part of a rich and expanding collection of human rights materials. Co-sponsors include The Human Rights Archive, the Duke Human Rights Center, the Archive of Documentary Arts, the Franklin Humanities Institute and the Program in Arts of the Moving Image (AMI).  Special co-sponsor for this screening: Sallie Bingham Center for Women’s History and Culture.