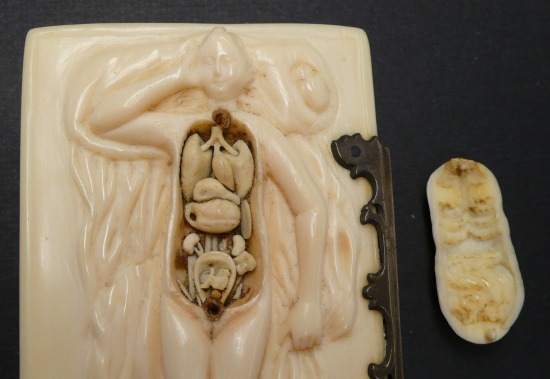 In researching changes in the representation of female bodies in Northern Europe, I noticed that ivory manikins (meaning “little men,” though usually female) portray  a changing trend away from the easily available prints of the female anatomy in the  sixteenth century toward more formal depictions, displayed only for demonstration. Little is known about the manikins themselves in terms of their origins, but stylistic and material differences may provide much needed information in terms of who made these models and the ways in which they were used by others.

In my travels, I found that the History of Medicine Trent Collection’s set of anatomical ivories is one of Duke’s—and America’s—great treasures. Normally they are stored in a glass viewing case in the Trent Room, but looking closely at them, they hold much more than one might expect.

One object in particular caught me by surprise. It is a manikin carved meticulously into the lid of an ivory box. It is not a unique example, as it is quite similar to other objects—one in the Trent Collection and the other in Dusseldorf. Opening the box is precarious because, as with the other manikins, the torso is easily removed (though, luckily, the individually carved organs have been glued down).

The manikin itself, however, is only one of the object’s curious features. When the lid is lifted, an exquisitely small painting is revealed on its underside.

In this strange scene a nude woman and a well-clothed gentleman dine unabashedly before an open plaza where others go about their normal errands. The presumed courtesan shares many similarities with her counterpart on the box, who is likewise unclothed and recumbent, clutching a sheet with her left hand. Figures of this kind are often seen in artisanal ivory works, but this particular object invokes intriguing questions as to how the fine arts relate to the anatomical sciences and historical representations of women.