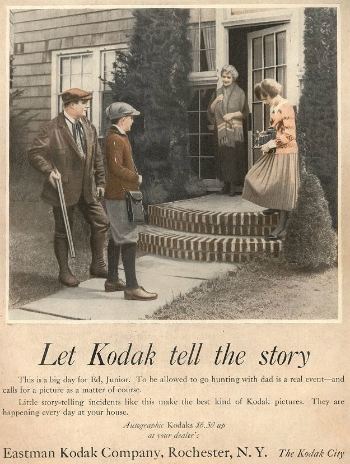 Eastman Kodak announced yesterday that it filed for Chapter 11 bankruptcy protection. The company has had a long struggle to reinvent itself in the digital photography age, having been a pioneer in the industry. The 132-year-old business has had a long and colorful history using advertising to promote its products. Through its advertising, Kodak taught the world what was worthy of picture taking. Think about it: before there were cameras, there were only illustrations and paintings to visually document people, places, and events. With the advent of photography, things could be depicted much more quickly and easily, but people needed to be shown how to use the new technology and inspired to capture images on film. In the multitude of print ads created over the company’s life, Kodak showed us examples of what could be photographed: weddings, graduations, holidays, births, proms, etc.  These ads are literally and figuratively “snapshots” of American life. The Hartman Center for Sales, Advertising & Marketing History has a significant amount of documentation about Eastman Kodak advertising in the JWT Archives and the Wayne P. Ellis Collection of Kodakiana.  Almost 550 Kodak ads are digitized and included in the Center’s popular web project, Emergence of Advertising in America: 1850-1920. Due to Eastman Kodak’s bankruptcy declaration, these digitized ads have received quite a bit of attention this week.  Here are a few links to articles using Kodak ads from the Hartman Center’s collections:

One thought on “Let Kodak Tell the Story…”