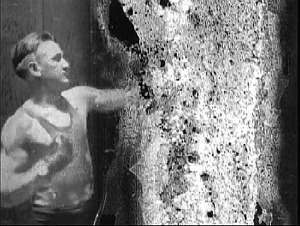 Our Archive of Documentary Arts is co-sponsoring two events with filmmaker Bill Morrison. Made from deteriorating reels of film, Bill Morrison’s experimental film Decasia is a symphony in decay. With a score composed by Bang on a Can’s Michael Gordon, this “haunting modern masterpiece” (The Guardian) will be presented in a rare screening, followed by a Q & A with Morrison. Tickets are $5 at the Carolina Theatre box office.

Filmmaker and artist Bill Morrison will talk with Duke graduate composers about the process of collaborating with composers scoring for film. Morrison has collaborated with an impressive line-up of composers, including John Adams, Bill Frisell, Steve Reich, and Vijay Iyer. This event is free and open to the public.

Morrison created a film for Bill Frisell’s new work, The Great Flood, which Duke Performances presented this past Saturday.