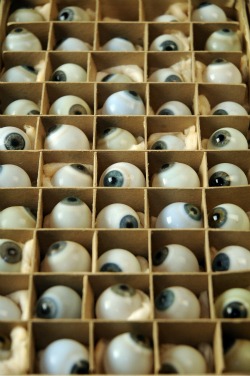 Have you ever wandered around a library’s stacks in the dark? Or wondered what might go bump in an archival box?

Stop by the Rubenstein Library’s Rare Book Room for a special Halloween “eeeks”-ibit and open house. We’ll be dragging out some of the creepiest and most macabre items from the shadowy depths of the library’s vaults—including the thirteen unlucky items below.

This event is free and open to the living and the dead. There will be candy. Lots and lots of candy.

1. A travel diary written by John Buck, a young American who found himself face-to-face with Bram Stoker (before he wrote Dracula)

2. Letters to Duke University’s Parapsychology Laboratory describing the 1949 poltergeist case that became the basis for The Exorcist

3. Opera Omnia Anatomico-Medico-Chirurgica by 18th century Dutch anatomist Frederik Ruysch, featuring illustrations of fetal skeletons playing instruments  among “trees” made of veins and arteries and “rocks and stones” that are actually organs, gallstones, and kidney stones

5. “Jack the Ripper” and “Cthulhu by Gaslight,” two board games from the Edwin and Terry Murray Role Playing Game Collection

7. Brochures and advertisements for coffins and other funeral-related paraphernalia from the Advertising Ephemera Collection

8.Two copies of Henry Milner’s 1826 melodramatic adaptation of Mary Shelley’s Frankenstein, with the very first illustration of (the actor portraying) “the Monster”

10. Maps and photographs of the Rigsbee Graveyard (yes, the graveyard in the Blue Zone)

11. Comics Review #1, 1965, which includes  Stephen King’s first published story, “I Was a Teenage Grave Robber,”  from the Edwin and Terry Murray Fanzine Collection

12. Halloween postcards (complete with spooky messages . . . or invitations to Halloween parties) from our Postcard Collection

13. Trixie Belden and the Mystery of the Whispering Witch by Kathryn Kenny, 1980

Which one will give you nightmares come the witching hour?

A Decidedly Feminist Taxonomy: Meredith Tax Comes to the Sallie Bingham Center
A Tale of Two Archives; or, The Persistence of 'Girl Land'
Filmmaker James Longley: Portraits from the Middle East