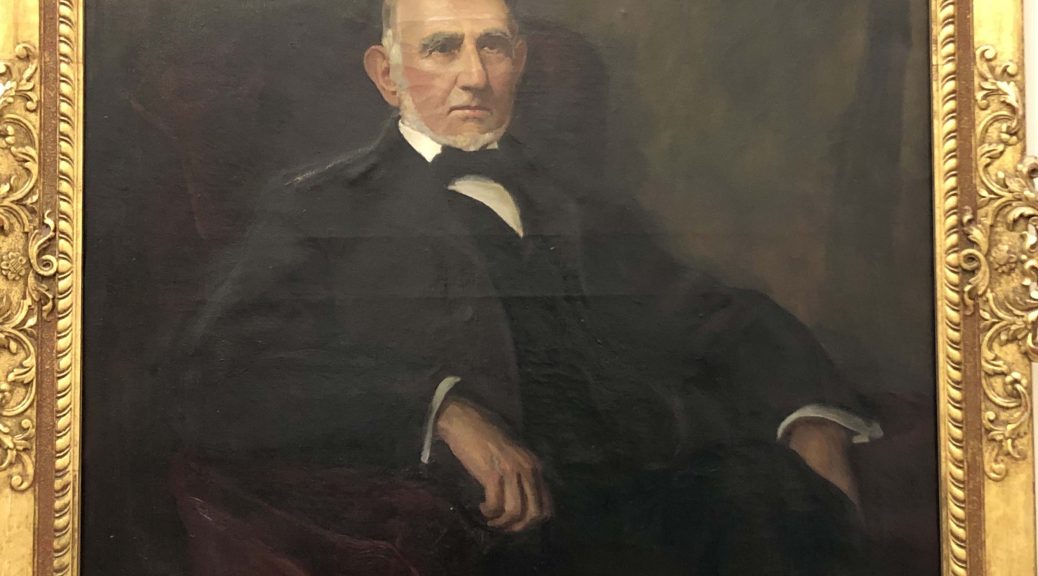 As part of the planning process for the Lilly Library renovation, Beth was invited by librarian Kelly Lawton to consult on moving and storing the artwork. I had previously helped plan moving and storing paintings from the Gothic Reading Room during the Rubenstein Library renovation so Beth asked me to come along. The great people over at Lilly Library had already made an inventory of the artwork in their building so we had a solid idea of what we needed to manage.

I have been in Lilly Library dozens if not a hundred times over my 7 years working at Duke. They hold some of my favorite collections (DevilDVDs, graphic novels, and art books). But like most people I just never spent much time looking closely at the artwork that makes up the wonderful atmosphere of Lilly. However, I had gotten to know the Gothic portraits really well during the Rubenstein renovation. I had to find wall space throughout Perkins to hang them all temporarily while the Rubenstein building was under construction and most of them ended up in staff office spaces. I had the portrait of H. Keith H. Brodie keeping me company in my cubicle area. So I was surprised when I saw thumbnail pictures of a couple paintings in the Lilly artwork inventory that I was certain were actually up in the Gothic reading room. I actually ran up two flights of stairs to the Gothic to be certain I wasn’t losing my marbles and yes, those portraits were upstairs exactly where I remembered them.

A C1 bus ride over to East Campus and I walked into Lilly Library only to have deja vu all over again. The same portraits were in Lilly too.

It’s not surprising that Duke University would have multiple portraits of prominent Duke family members, but it was a little surprising to find that the library had multiple copies of the same portrait reported to be by the same artists. This required research! I mean, I work at a library, of course my response to any mystery is to do research.

An article in the Duke Chronicle from November 4, 1925 details the acquisition of a Washington Duke portrait by John Da Costa from the Duke family with plans to hang it in a parlor in the East Duke Building. Interestingly this article is right next to an article about construction of the Lilly Library building. The next trace of the Da Costa Washington Duke portrait comes from a 1929 letter from the Frank C. Brown papers where it is listed among paintings that need to be varnished.

In the University Archives Art and Artifacts records there is an inventory of portraits in the University library (now Perkins Library) from 1943 that lists a portrait of Washington Duke by Da Costa and Benjamin Duke by Wiltschek. But another inventory from 1957 of the Women’s College Library (now Lilly Library) also list the portrait of BN Duke by Wiltschek. So there have been duplicate Dukes for decades!

I finally came across an undated note about a J.B. Duke portrait painted by Da Costa that indicated Doris Duke had the original but that additional copies by the artist were in the Board of Trustees room and in Perkins Library. There is no date on this note so it’s hard to fit into the timeline but based on some other clues I suspect it was from sometime in the 1970s. Importantly, it does verify that John Da Costa made multiple copies of at least one Duke portrait.

It was Assistant University Archivist Amy McDonald that shed light on the big key detail about these portraits. She recognized the paintings as being copied from photographs not painted from life. Check out the photos in our collections. They look very familiar.

It makes me wonder how many other duplicate Dukes might be out there. In my research I found at least one other JB Duke portrait by Da Costa at Rough Point, the Rhode Island mansion of Doris Duke. I also found a reference to another BN Duke portrait by Wiltschek that hung in the East Duke Parlor but I haven’t had a chance to go over and check if it’s still there. Perhaps I’ve been passing more Da Costa Washington Dukes and Wiltschek B.N. Dukes around campus and never even noticed.