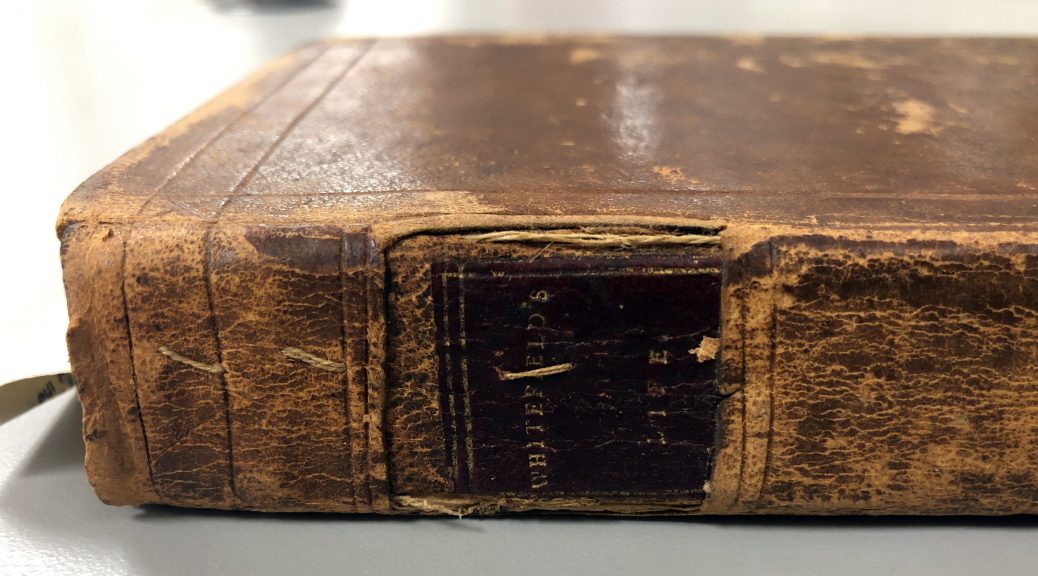 When this copy of Memoirs of the life of the Reverend George Whitefield (1798) came into the lab the other day, we knew pretty quickly that something was off. The label on the spine looked like it was sitting inside a little window of leather, and not even very well lined up. Looking closer, you could also see some stitching running vertically along the center of the spine. We often see examples of home-made repairs for bindings, but I had never seen one like this before. It appears that someone has just swapped bindings from another book! I’m guessing that the original boards had come off of the book and, rather than having it rebacked, a previous owner had just located a similarly sized-volume as a donor. On the interior of the boards, you can see evidence of cord from the previous board attachment. After removing the binding from it’s original textblock, a little window was cut in one of the spine panels to allow the correct titling to mostly show through, and then the new textblock was glued (and sewn) in at the spine. It’s a pretty clever solution, but it must have been difficult to find a donor binding of similar enough size to work. I always enjoy finding evidence of historical repairs and seeing the creative approaches that people have taken to keep their books in usable condition.

Edit: Today I learned that there is a term that could be applied to this item: remboîtage.  It is interesting to compare the definitions from Etherington & Roberts and Ligatus (derived from Carter’s ABC for Book Collectors). Most folks would not think of this as an example of a recase, because that term implies putting the textblock back into it’s own binding. Carter’s definition of remboîtage goes to great lengths to describe it as putting a textblock in a more elegant, more desirable, or superior binding. This rather crudely executed swap may be a bit of a stretch for Carter, but one could argue that a functioning binding is more desirable than a broken one.

One thought on “Invasion of the Binding Snatchers”