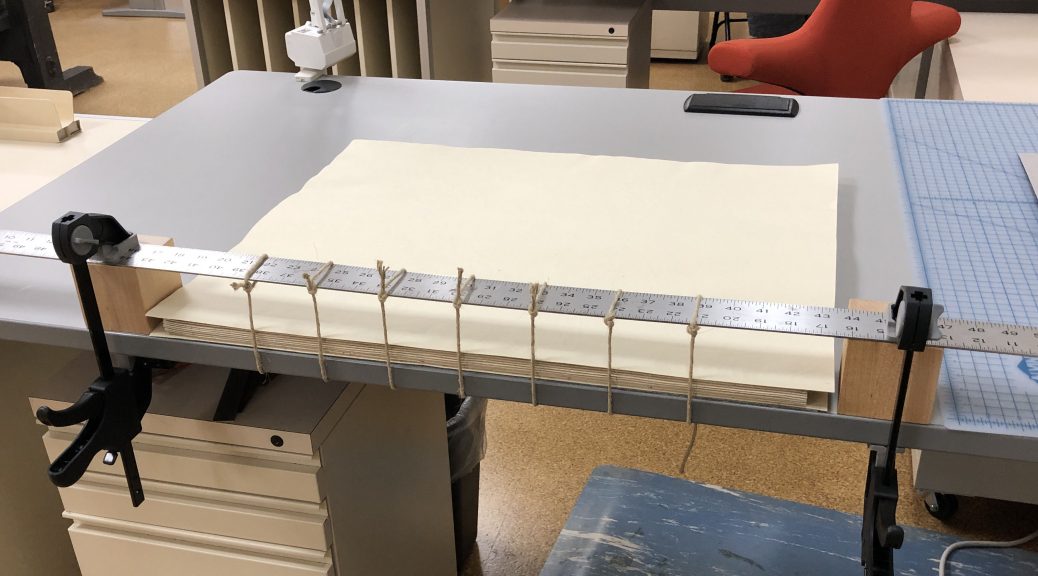 Oversized books come with a lot of handling and treatment challenges. Just moving and opening them can be physically demanding and former owners may not have had a good place for storage. This atlas of London street maps from 1799 measures approximately 26″x22″. Prior to acquisition, it had been rebound in a modern limp leather binding and, in attempt to make it easier to transport or store, had been folded vertically in half. The leather became very chemically degraded and the outward-facing rear cover was torn off. I’ve spent the last several months piecing the broken, brittle maps back together and now it is ready for some new covers. We’ve written on Preservation Underground before about boxing some of the biggest bindings in the collection and treatment of double folios. As in those cases, a lot of the specialized equipment we have in the lab is too small for books of this size. At times like these, you just have to put on the appropriate theme song, channel Richard Dean Anderson, and gather up all the clamps in the lab.

Resewing a book on raised cords requires that some tension be put on the sewing supports. We typically employ a sewing frame to hold them in the correct position during this process, but even the large wooden one we have in the lab is a bit too short. Luckily we have a very long, rigid metal ruler and uniform wooden press blocks to take its place. I will be constructing a new binding with rigid boards for this atlas similar to another copy in the collection, and that requires some rounding and backing of the textblock spine. This process is traditionally done with a flat-faced hammer, in a lying press or job backer. The textblock spine is actually composed of compensating guard strips of flexible paper, to which the maps have been mounted. This allows me to reshape the atlas textblock safely. These guards also made the sewing process much easier, as I could just sew through them instead of a full-sized folio. Our job backer is, again, about 4″ too short for this book to fit inside – so I attempted to recreate one with press boards and deep-throated C-clamps. It had to be clamped to the table to allow me to tap with a wooden block between the raised bands and shape the spine. I had to adjust the center clamp as I moved from head to tail, then flip the entire contraption to get each side.

It ended up being fairly effective. With some temporary working boards laced on, you can see the gentle round and small textblock shoulder that is formed. The atlas will get endbands and a strong linen spine lining before the final board attachment. The laced on, rigid boards will provide the protection and strength that such a large book requires. Although I’m sure those clamps will be needed again before it is finished.

Spot the Difference
10 Years, 10 People: Rachel Ingold
Keeping It Together