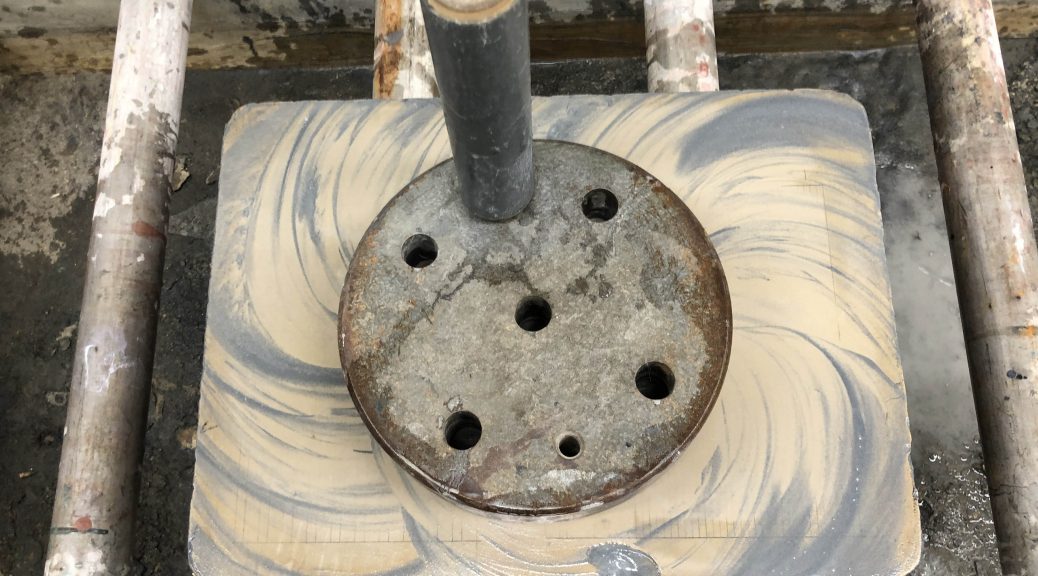 When paring leather for book bindings or book repair, it is essential to have a flat, smooth surface on which to work. The parts of the leather that will be turned-in, particularly around the endcaps of the book, must be made very thin and often with a long, gradual bevel. Uneven paring will visibly show after being adhered, so it takes some care and practice to get it right. Paring on the right surface allows you to feel any variation in the leather with your fingertips and take off more material as needed. You also need to work on a material that is hard enough to not be cut up by the paring knife. Many materials (such as glass, marble, or granite) are used for this work surface, but one of the more common is lithographic limestone. Limestone won’t dull a blade as quickly as other stones. It also absorbs water, so I like using it as a work surface for the whole process of covering in leather.

The lab recently acquired this small lithography stone, which was used as a printing plate for what appears to be a worksheet for practicing handwriting. The printing image on the “bottom” of the stone includes examples of short words with ascenders and descenders: land, lakes, plan, glide, plan, fling, often, etc. The stone was pretty flat, but had a number of scrapes and scratches that could mask problems with paring work. I wanted to remove those before we began using it. Luckily there is a standard method and a lot of resources available to help me do that. When a stone plate has been printed for the last time, it must be refinished (or “grained”) to remove the old image and prepare the surface for a new drawing. I consulted The Tamarind Book of Lithography to see what we would need to do to prepare the stone. This is a great resource that includes a lot diagrams and step-by-step instructions. Luckily Duke’s Department of Art, Art History & Visual Studies had the equipment to grain a stone and they allowed me to bring the stone over to the studio.

The process was fairly simple and kind of fun to do. With the stone sitting on top of the graining sink, I poured a little water over the top of the stone to act as a lubricant and then added some course carborundum grit (silicon carbide) for the abrasive. A heavy piece of round steel with a handle, called a levigator, is then used to spin over the stone surface to start grinding it down. I tried taking a video of the process, but it was a little hard for me to hold the camera steady while using the levigator. You can get a much better overhead view in this video from California State University Stanislaus:

The spinning continued until I had worked up a fairly thick stone sludge. The stone is washed clean and the process is repeated until enough of the surface has been removed. Printers will continue graining with increasingly fine grits to get a very fine surface for drawing – but that didn’t seem necessary for our purposes. I believe the outside edges of the stone surface are also filed by the printer to keep them from showing up as an artifact in the print, so the patina and ghost of the original print are still visible around the outside of our stone. I decided to stop at this point because some of the edges were starting to get sharp. We’ve got a sizable chip on one side that needs to be avoided anyway.

I’m pretty pleased with the results. The print image still remains on the bottom of the stone, so we can keep some evidence of what the stone was used for previously. The stone is fairly heavy (40-50 lbs by my guess), so it now lives on a wheeled cart so it can be easily moved around the lab as needed.

My New Favorite Tool
Our New Golden Devil
Keeping It Together