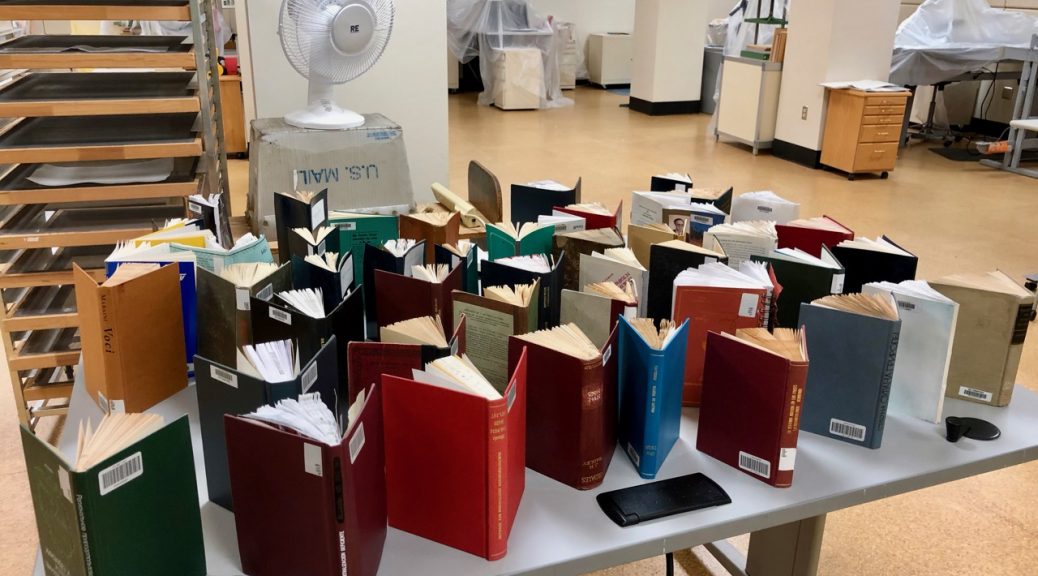 Campus is still closed but that doesn’t mean that things have been quiet for Conservation. Last week we responded to a call from Marvin Tillman, Manager of the Library Service Center (the offsite high density storage facility). He had come in to meet a repair crew from Facilities who were working on the sprinkler system pump. Marvin noticed water on the floor and quickly jumped in the picker and navigated to the top of the stacks. There he found a leaking sprinkler head and many trays of wet books underneath it. Marvin removed the trays, put the books in the freezer and called Conservation. After a thorough review of the stacks he found one more tray that needed to be removed.

I picked up a total of eight bins of books and took them back to the lab to air dry. First step was to record the bar codes so we could deal with them in the management system.

There were 261 wet books. These ranged from just damp to pretty wet. All were salvageable.

Mark Barker, Director of Security and Facilities Services set up a couple folding tables in the dirty room for me and brought all the fans from the disaster supply closet. I proceeded to divide the books by wettest, medium-wet, and damp. The wettest items went into the fume hood since that pulls a constant supply of steady air.

The medium-wet books got set up on tables with fans circulating air around them. Loyal readers will remember when we invented/discovered the “double-decker drying system.” It really works, and it means you can dry twice the number of books with the same footprint. The trick is airflow. You want to see “the disaster recovery wiggle.” Every book should be wiggling a bit as the air moves around the space.

The damp books were set up on one of the lab tables with a fan.

Once the items were dry they were pressed for a few days to flatten them.

The books that were mostly flat but needed a bit of pressure were simply put under boards and bricks.

The majority of the 261 items will be going back as-is to LSC. A small number will be rehoused before returning, and fewer still will be repaired. Thanks to quick identification and action all around we can say that this recovery effort was successful. It did bring up questions about recovery during a pandemic. Those questions will be on the next agenda for the Disaster and Environment Response Team (DERT) meeting.

Another Day, Another Disaster
Interview with Erin Hammeke, Conservator for Special Collections
Working From Home Options for Conservation Labs

One thought on “When It Rains On The Inside”