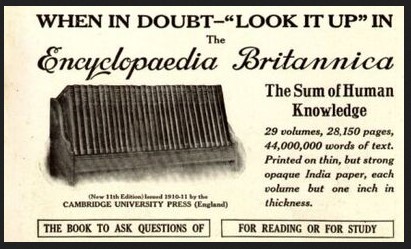 Unlike millions of old reference works in declining bindings, the 11th Edition of the Encyclopedia Britannica, published in 1910, has a following. Veneration of this edition of the Encyclopedia Britannica spans beyond libraries and the antiquarian book trade into popular culture.  A. J. Jacobs writes about it in his book The Know-It-All, and Hans Koning, powerhouse of New Left thought, published an eloquent meditation on the world view reflected in its pages. It is discussed as THE GREAT 11th EDITION, listed alongside the works of Heidegger, Camus, and Fukuyama as one of the 100 most important non-fiction works of the 20th Century. Two websites are devoted to 11th Edition fandom. There is even a fingernail polish.

People who praise the 11th Edition Encyclopedia Britannica point to the illustriousness of the contributors, the profusion of beautifully written biographical entries with odd, sometimes questionable details (Pedro I of Portugal disinterred his dead mistress and placed her remains on the throne of the queen, Potemkin died “…in consequence of eating a whole goose in one sitting,” etc., etc…) or the detailed, illustrated accounts of manufactures, engineering, and natural history. But the veneration of this work is more diffuse and more adoring than these particularities account for. Hans Koning writes:

“The world of the Eleventh Edition was at the zenith of those ‘encyclopedic’ prerequisites, rationality and positivism. All of humanity appeared to be on the threshold of being totally understood, described, improved, and then perfected, through the logic of Anglo-American institutions and thought…it was the high point of the Enlightenment, doomed to end when the lamps went out all over Europe in the fatal summer of 1914.”

Kelly Lawton of Lilly Library had come across a single volume I repaired in the early 2000’s and asked Beth Doyle if it could be used as a model for repair of the remaining numbers in their original bindings. This repair had retained the section sewing and the boards but replaced the badly degraded leather spine and heavy, brittle end sheets. My goal had been to make it robust enough to be handled as part of the circulating collection without unduly sacrificing original components. Fortunately, the technician, the end sheet paper and the black book cloth involved in the process that produced that successful repair were still available to create a matched set.

Within the week a large bin arrived and the project began. I used a combination of poulticing and manual manipulation to remove the degraded leather on the spines and the pastedowns on the inside of the covers. This was perhaps the biggest mess I have ever made in the lab, and required a thorough cleaning of tools and work surfaces each night.  There were piles of degraded leather crumbles and dust, globs and slurries of poultice, all haunted by the distinctive odor of old animal hide adhesive. Poultices had to be watched closely because some of the remaining leather glued to the back still contained green pigment that jeopardized the section backs of sheer white ‘India paper.’

Once all 14 volumes were clean, backed and fitted with new end sheets, I reused the original embossed covers in a case structure and filled my press with the newly cased Encyclopedia Britannica volumes.