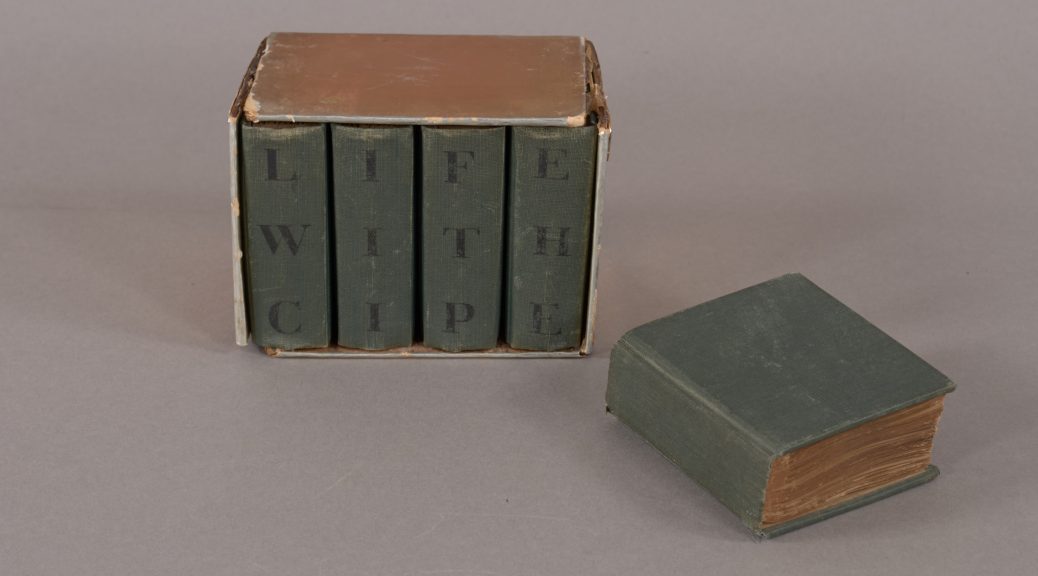 Occasionally an item will arrive in the lab that is so intriguing that I just have to know the story behind it. These five miniature photograph albums titled “LIFE WITH CIPE” caught my eye. The photographs were tiny but beautiful and I was curious about the meaning of the title. What is CIPE? The photographs mostly look like candid vacation snapshots but there are also some still life and city scenes. They are all so small and regular in size and proportion that they must have been printed from negatives as a contact sheet. One print even shows the holes from the film. The images show a great sense of design and there is an eye to composition significantly better than your average family snapshots. They really felt more like an artist’s portfolio than a typical vacation album. So it was no surprise when I heard back from archivist Rick Collier and Hartman Center Director Jackie Reid Wachholz that these are photographs from the personal collection of graphic design power couple Cipe Pineles and William Golden. While the Creative Director at CBS in the 1950’s William Golden designed the eye logo still used by the broadcaster today. Cipe Pineles (pronounced Cee-Pee) was the first female art director of a major magazine and the first female member of the Art Director’s Club of New York in 1943. Working at big name publications like Glamour, Seventeen, and Mademoiselle she created magazines directed at young working women that appealed to their intelligence and independence. She is also credited as being the first to commission fine artists like Ad Reinhardt and Andy Warhol for work in mass media publications. In order to learn more about Cipe Pineles I borrowed a biography from Perkins Library and discovered it was written by none other than our very own conservation department volunteer Martha Scotford. Before becoming a volunteer in our lab, Martha was a professor of graphic design at North Carolina State University and is the reigning expert on Cipe Pineles. What a small world! I was so happy to be able to share this addition with Martha who recognized these albums from her visits to the Golden’s home when she was writing Cipe’s biography.

Duke Rubenstein Library also holds a collection of William Golden’s papers that I looked through for more insight into William and Cipe’s lives. One of my favorite discoveries in that collection was a letter with attached photographs that William sent to Cipe. The photos are from his time in Paris during WWII and illustrate the events he saw on VE day. The photos are the same size as the ones in LIFE WITH CIPE and I wonder if this was a precursor to the albums. Rubenstein Library has also recently acquired a collection of Cipe’s papers too. I wonder if there are more tiny photographs there.

One thought on “LIFE WITH CIPE”