This coming summer Duke will host a 2016 NEH Summer Institute, titled “The History of Political Economy”. In preparation, the library is putting together a small exhibit of complementary materials from our collection. One of the items that will be on display is our first edition set of what is widely considered to be Adam Smith’s magnum opus,  An Inquiry into the Nature and Causes of the Wealth of Nations. Smith’s 1776 text is most commonly known for coining the phrase “the invisible hand” to describe forces which guide free markets.

I am a big fan of the NPR podcast Planet Money, and over the years I have learned quite a bit about the significance of Smith (and this work in particular) through the show. Therefore, I was very excited to for the opportunity to examine this item and address some of the condition issues for each volume.  While Smith is mentioned frequently on Planet Money, two episodes explore the man and his work in greater depth:  “Adam Smith, Mama’s Boy” and “Adam Smith and the Not So Invisible Hand“.

The two volumes of this edition are in matching tightback bindings with single raised sewing supports. The spine and corners are covered in green goatskin with green marbled paper siding-up the boards. The spines are extensively decorated with gold tooling and there is some blind tooling on the faces of the boards. While I cannot determine if these are the original bindings, they appear to be contemporary to the text. The goal of this treatment was to stabilize each book, reattaching any loose pieces and making the bindings functional for safe display or use in the reading room. My repairs attempt to satisfy this goal with minimal alteration to the appearance of the books.

The first volume was in better condition, but had been damaged at the tail of the spine. The joints were splitting along this panel, the tailcap was missing entirely, and the leather was continuing to lift where the damage had occurred.

While the sewing supports all remained intact and the boards were securely attached, the splitting along the tail end joints and the risk of additional loss was a concern. After fully lifting the leather away from the tail panel of the spine, the textblock spine was lined with thin Japanese paper and wheat starch paste. An extended lining of bias-cut airplane linen was then adhered on top. The extended pieces of this lining were split and adhered on either side of the board using David Brock’s board reattachment method. Finally, the volume was rebacked with a thick Kozo fiber Japanese paper, toned to match the original leather. All original covering materials were readhered.

The front board of the second volume was nearly detached, hanging on by just a single thread! I began by carefully lifting the leather at the boards and spine to gain access to the textblock.

Repairs to the interior of the text were kept to a minimum as well.

It appears that the endsheets of both volumes had been replaced at some point with a thin wove paper. These new endsheets had become creased and were developing cracks and tears along the folds. Using local humidification techniques, the creases were flattened and tears were mended with thin Korean papers, toned to match.

The second volume features an interesting blank leaf with a large bookplate adhered to the recto.

The catalog record indicates that this item once belonged to Prince Lieven, the Russian ambassador to London from 1812-1834. This leaf is currently around 1/4″ shorter than the rest of the textblock and had a very poorly repaired tear along the head edge near the spine. During treatment, I was able to release this repaired piece and reattach it correctly along the tear. Strangely, when the torn corner was put back into place, the height of the leaf matched the rest of the textblock. My best guess is that the top edge of this leaf had become damaged at some point. Possibly when the new endsheets were added, this leaf was hastily repaired and trimmed down to have straight edges.

The last issue for me to deal with was the somewhat awkward enclosure. In more recent years, someone had constructed a double slipcase for the two volumes.

Each volume was also placed inside a cloth-covered 4-flap enclosure. 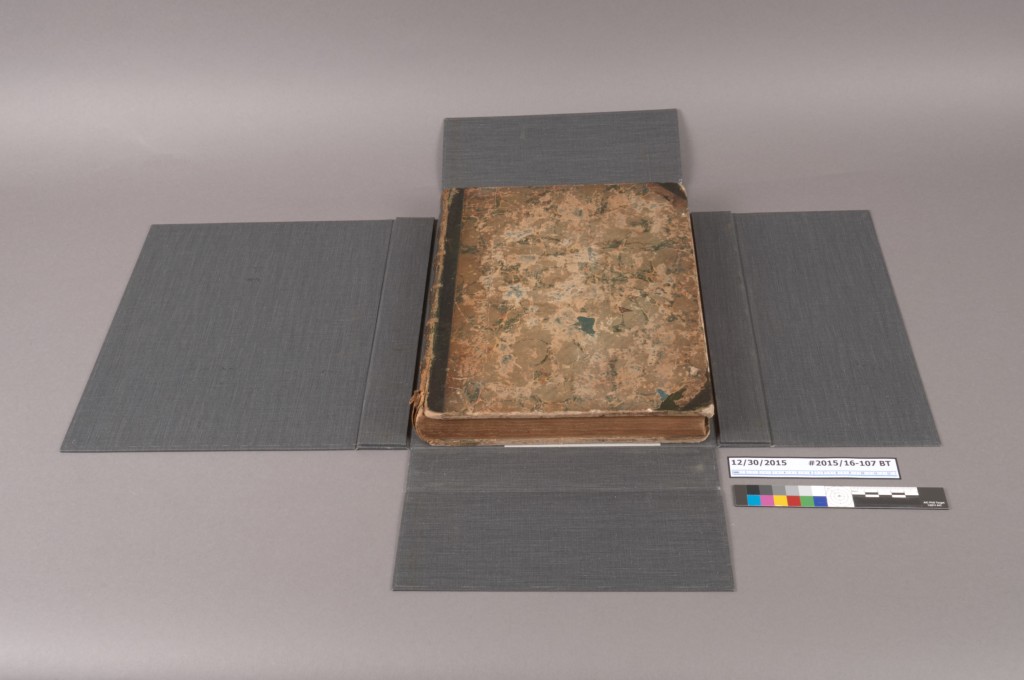 This was actually an enclosure solution that I had not seen before, and is a nice addition to my post about restraining enclosures. While the 4-flap does mitigate some of the dangers of a slipcase that a standard chemise cannot cover, having two books in one slipcase makes handling much more difficult. The case doesn’t have pull tabs or an easy way to extract a single book. The user must tip the entire set forward so that both books will slide out simultaneously. As you can imagine, this can be quite dangerous if the user isn’t being observant. Additionally, the 4-flap creates a very large footprint when open (see above).  As these enclosures were made fairly recently and not artifactually significant, we discussed with the curator the option of replacing them with standard cloth-covered clamshell boxes. 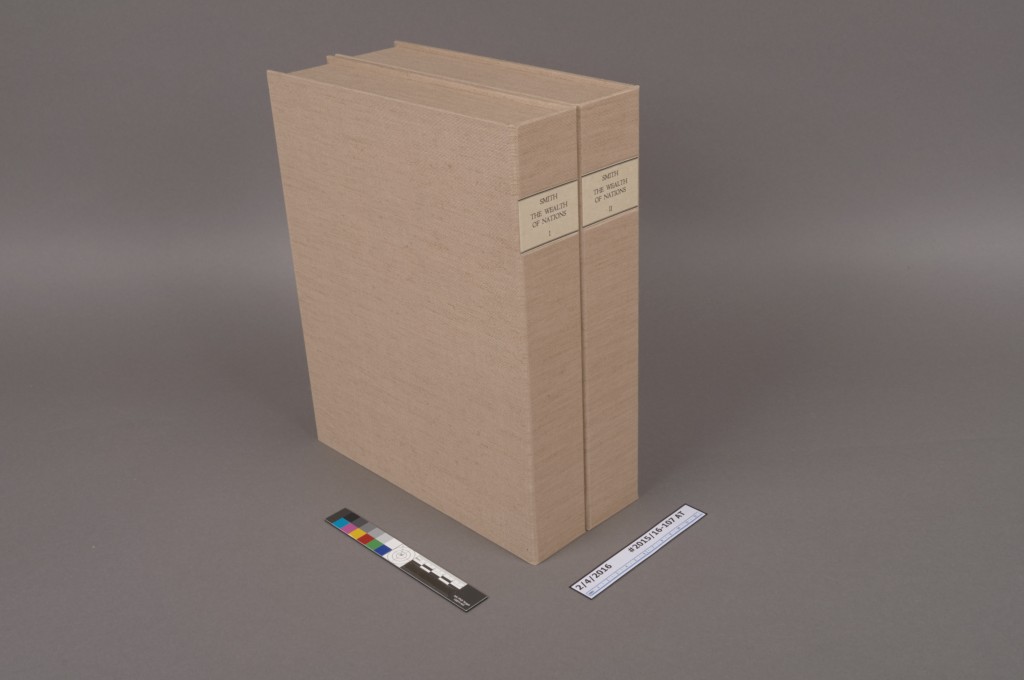 With the new board attachment, consolidated covering materials, and simpler enclosures, Mr. Smith is ready for engagement with human hands again. Check back with our Exhibits Page to see when this and other exciting items from the collection go on display.