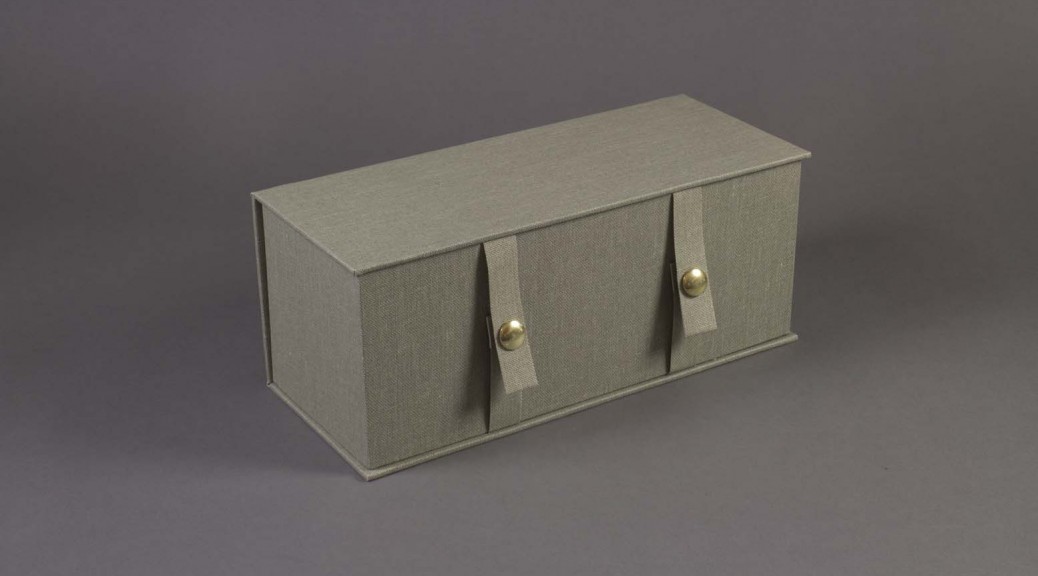 As evidenced by the archives from the tag “Boxing Day“, we make a lot of boxes in the lab. Some objects require specific enclosures and we have many materials and techniques at our disposal for fulfilling the needs of the object. Of particular interest to me lately have been enclosures appropriate for parchment over boards bindings, which include some form of restraint.

Parchment is hygroscopic by nature and will change size and shape dramatically under different environmental conditions (Woods, 2006). The structure and limited adhesive of a limp binding will usually allow the parchment to adjust (Clarkson, 1982), but bindings composed of parchment adhered over stiff boards can distort significantly with fluctuating relative humidity. The vellum over boards binding below recently came through the lab for treatment and illustrates (to a lesser extent) some of the typical warping that can occur with this style of binding.

Planar distortion of the board creates a poor book action and opens the textblock to dust penetration. Once the boards have been flattened again, storing the book in an enclosure can create a micro-climate and buffer the item from some environmental fluctuations. Including gentle pressure or restraining elements can prevent the warp from returning or pushing open the box. Note that one should not attempt to flatten warped boards with pressure alone. Simply pressing down on the fore edge of a distorted board will strain and potentially damage the joints. There are many different options for creating a restraining enclosure; the following examples are common solutions, but certainly not exhaustive.

The simplest and most cost-effective of this type of enclosure is the the classic “phase box” (Waters, 1998). This design is constructed from stiff barrier board, with string and post ties at the fore edge. While quick to construct, this solution is not as elegant as some of the others. 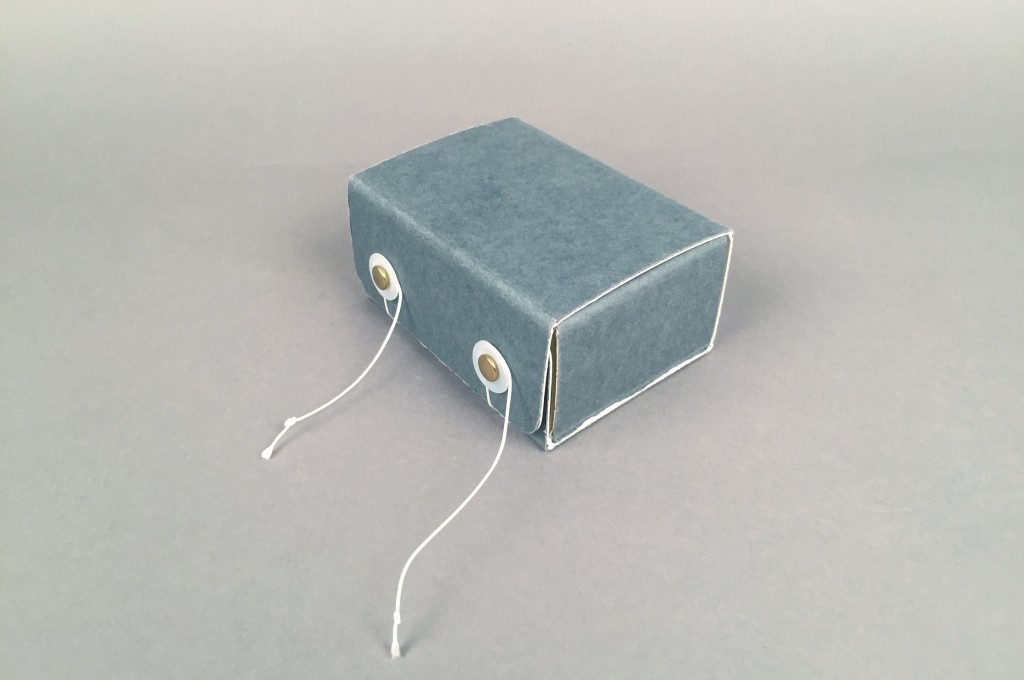 Another option is to construct a restraining wrapper that would sit inside a standard box. Tomomi Nakashima, Book Conservator at the University of Utah, J. Willard Marriott Library, has developed a rather inventive wrapper, using magnets, barrier board, and clear polyester. Photos below by Christina Thomas.

The slipcase was once a very popular style of book enclosure and is still often seen with fine press editions or design bindings. Slipcases can be simple to construct and, if well-fitting, will restrict the opening of the volume inside. Roger Powell’s treatment of the Ricemarch Psalter in the early 1950s made use of a wooden version of the slipcase for this very reason (Cains, 1996). It is worth mentioning that Powell also used a set of spring-lidded wooden boxs for the Book of Kells (Pignatti, 2012).

We do not currently make new slipcases for items in our collections. Books can be difficult to safely remove from your run-of-the-mill cloth-covered slipcase, and the abrasive action of sliding a book in and out can present a danger to fragile covering material. A chemise may reduce but likely will not eliminate those handling issues.

The cloth-covered “clamshell” or “drop-spine” box can be a more durable and aesthetically pleasing enclosure than those listed above. For books requiring restraint, the clamshell structure can be easily modified to include restraining elements. There are examples in the literature of boxes with clasps (Foot, Blacker, & Poole-Wilson, 2004), but I cannot recall ever seeing one. Clasps can be difficult or expensive to make, and one would assume those clasps have suffered from the same condition issues as their book-bound counterparts over the years. There are modern alternatives with the same mechanical principles, however. Fore edge restraints using ribbon ties, Velcro®, or metal snaps can easily be adhered between the trays and case of the clamshell enclosure. 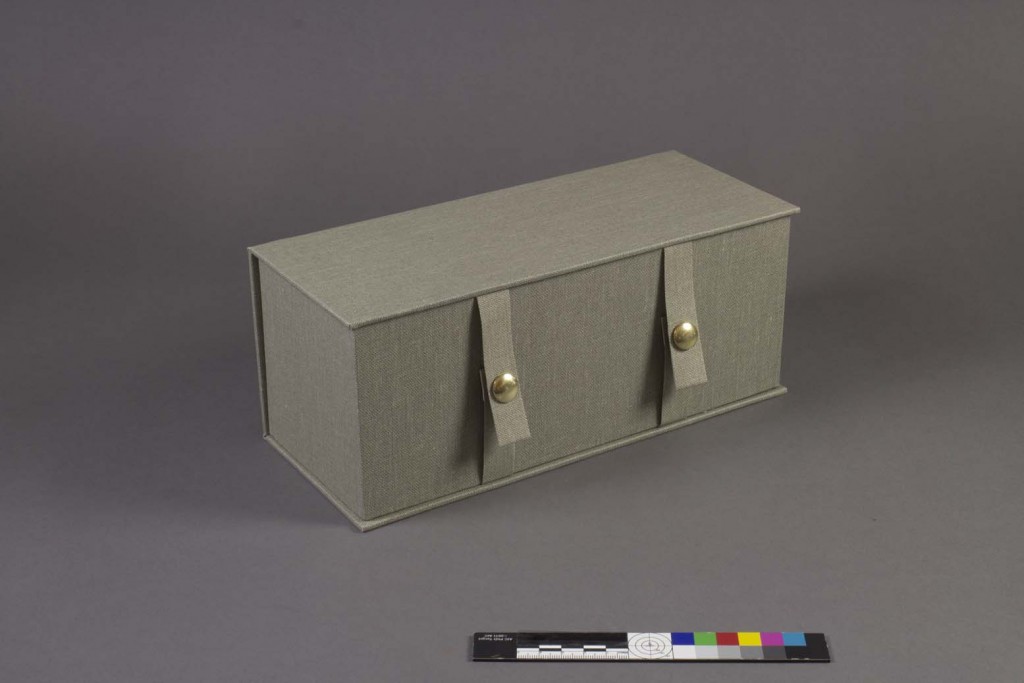 As bookcloth can tear quite easily with applied shearing force, I would suggest including a more durable material at the core of each strap.  I will often use Tyvek® or parchment strips, wrapped in bookcloth.

Another variation commonly made to hold parchment over boards bindings is the pressure-lid clamshell box. The inner tray of the enclosure features a simple flap or lid, which is hinged to the fore edge wall and prevents the boards from pushing the box open. 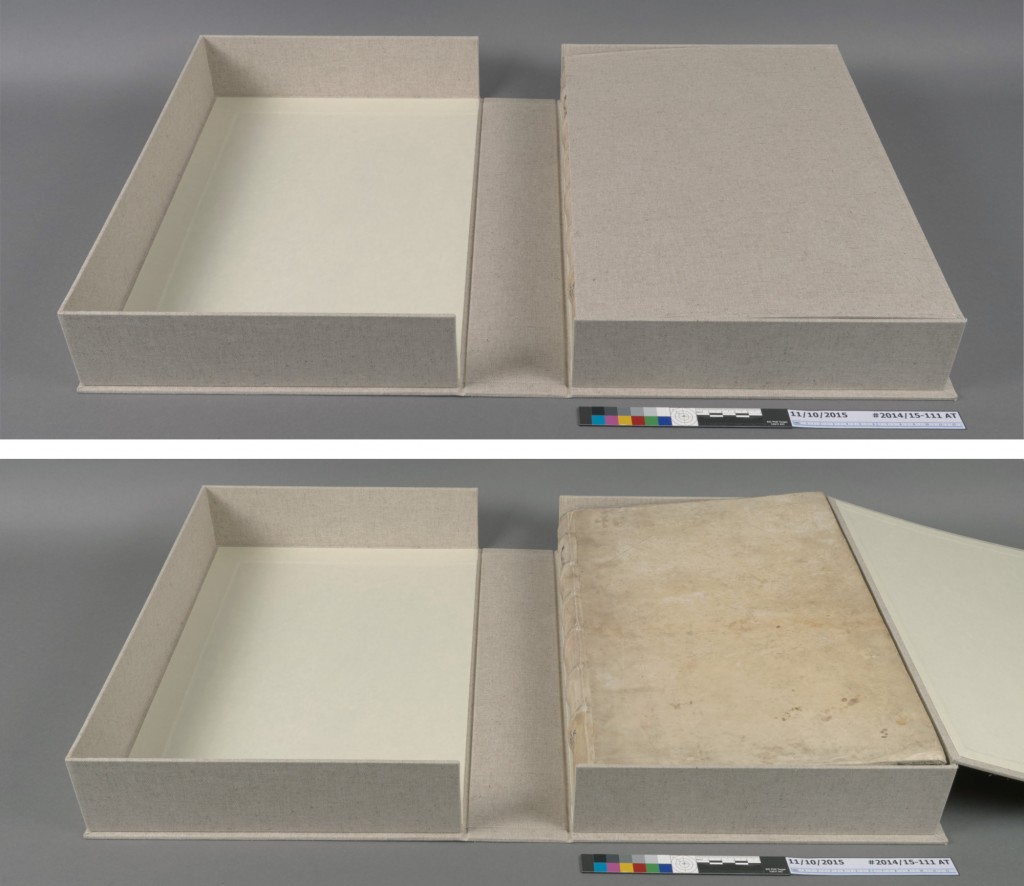 I cannot recall ever receiving explicit instruction on an exact method for covering and attaching the inner lid for this style of box. Having learned many different methods over the years for constructing and covering a standard clamshell enclosure, I became curious as to how other conservators and bookbinders were executing this modification.

I began with a review of the literature on book enclosures to determine where this structure originates. Email listserv discussions have suggested several attributions of its origin to notable figures in the field, but I have not been able to make a definite link. Many of the classic manuals and reference volumes describe a method for making a clamshell box, but I have yet to find one which describes the making of the pressure lid.  My biggest obstacle is nomenclature: while I tend to call this feature a “pressure lid”,  it is often described with other names. A simple online search yields several images of this style of box shared in digital portfolios or treatment documentation, with “pressure lid” “pressure flap”, “fore edge flap”, and “inner lid” all appearing as descriptors. I have not yet been able to examine some of the more obscure print resources, however, and my own admittedly compulsive curiosity will likely force me to continue searching.

With input from colleagues, I began constructing models using different methods of attaching the pressure lid. Four methods emerged. A note about these illustrative models: Each model is only the inner tray of the enclosure. I completed each step of the covering process with a different color of cloth to better illustrate the process. In all but Method D, the pressure lid closes to fit inside the walls of the tray. Obviously for these methods, the thickness of the covered board must be accounted for in constructing the dimensions of the inner tray.

My initial thought was to attach the inner lid with as few pieces of cloth as possible. In this method, the head and tail of the lid are first covered with strips of cloth, then the lid is attached at the time of covering the inner tray. The interior of the lid and tray were then covered with a single piece of cloth. Click the thumbnail images for a larger image.

This method of covering is the nicest looking in my opinion, but it can be tricky to accomplish neatly and produces more waste cloth than the others.

Sidney F. Huttner suggested a method with similar attachment. The lid is still attached at the time of covering the tray, but with a much narrower strip of cloth. A second piece of material covers the outside of the lid, with turn-ins at the three remaining sides. For this model, I covered the inside with separate pieces of cloth for the interior hinge, interior of the lid, and floor of the tray.

This covering technique can be accomplished very quickly and makes use of smaller pieces of material, creating less waste. The slight bump of cloth on the exterior of the tray (far right image) is not as attractive, but could be mitigated with in-filling.

The boxing manual from the Library of Congress  includes a description of a clamshell box with a “hinged shelf” (Brown, Etherington, & Ogden, 1982). This shelf was intended to separate and hold two items in the interior of the box; for example, a book and a set of plates. I discovered that the design could be easily adapted to function as a pressure lid.

The inner tray of the enclosure is constructed and covered in the usual way, with an additional covered board thickness added to the width of the tray dimensions. The flap is constructed separately, using two pieces of board. The thinner board of the flap is then glued to the interior fore edge of the tray.

This method uses a little more material and can be a little tricky to securely attach. During the gluing process, I stood the tray up on the fore edge inside a book press with the flap in place. Wooden blocks were then stacked inside the tray until they cleared the spine edge. The press was then tightened down onto the wooden blocks.

The final method of covering was suggested by Scott Kellar. For this method, the pressure lid actually sits on top of the walls of the tray. The tray is covered as usual, but the flap of cloth which usually covers the interior of the fore edge wall of the tray is sliced off at the top of the wall. The pressure lid is covered with an extended piece of cloth at what will be the fore edge and the remaining three sides are turned in. A spacer of thin material (20pt Bristol board) is placed between the flap and the tray while the extended cloth is glued around the fore edge of the tray and turned in underneath. When dry, a strip of material is added to the interior joint. In this model, it would appear that the interior fore edge wall and floor of the tray are covered separately. The lovely cut away model pictured below was kindly made and sent to me by Karen Hanmer.

I find that it is always nice to have options when constructing an enclosure and the different elements of these methods can be adapted or recombined in many different ways. I would like to thank everyone who answered my inquiries about their covering methods, and I hope that these descriptions and images are of some use to those attempting the pressure lid box for the first time.

Pignatti, G. (2012). Boxes for the housing and protection of books: Observations on their history and development. E-conservation: the online magazine, 23.

Which Came First, The Chicken or the Egg?
Confessions of a Conservation Librarian
What's In The Lab: Revolutionary War Medicine