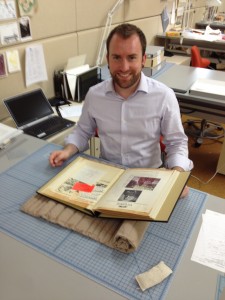 In early August, just as the final move back into the renovated space was taking place, Henry Hebert joined Conservation Services as the new Conservator for Special Collections. Henry is no stranger to the lab, having worked on the circulating collection as a graduate student several years ago.

While working as a contractor at Baker Library at the Harvard Business School, I was able to assist with treatment of the United Fruit Company Photograph Collection. The collection is composed of around 10,000 photographs documenting the company’s extensive banana production and shipping operations in Central and South America. Every day brought new and exciting photographs – everything from serpentariums to stone ruins in the jungle. The working condition on the farms were harsh and some of the images of workers were quite haunting. Through this project I learned that the story behind your typical grocery store banana is far more strange and interesting than you would ever think.

Henry holds a masters degree in library science from the University of North Carolina at Chapel Hill and a diploma in hand bookbinding from the North Bennet Street School. Following graduation, he served as the Von Clemm Fellow in Book Conservation at the Boston Athenaeum. Henry returns to North Carolina from the University of Illinois at Urbana-Champaign, where he was the Rare Book Conservator.

Welcome back to Duke, Henry!