How the Libraries Support First-Generation Students at Duke

By Aaron Welborn, Director of Communications 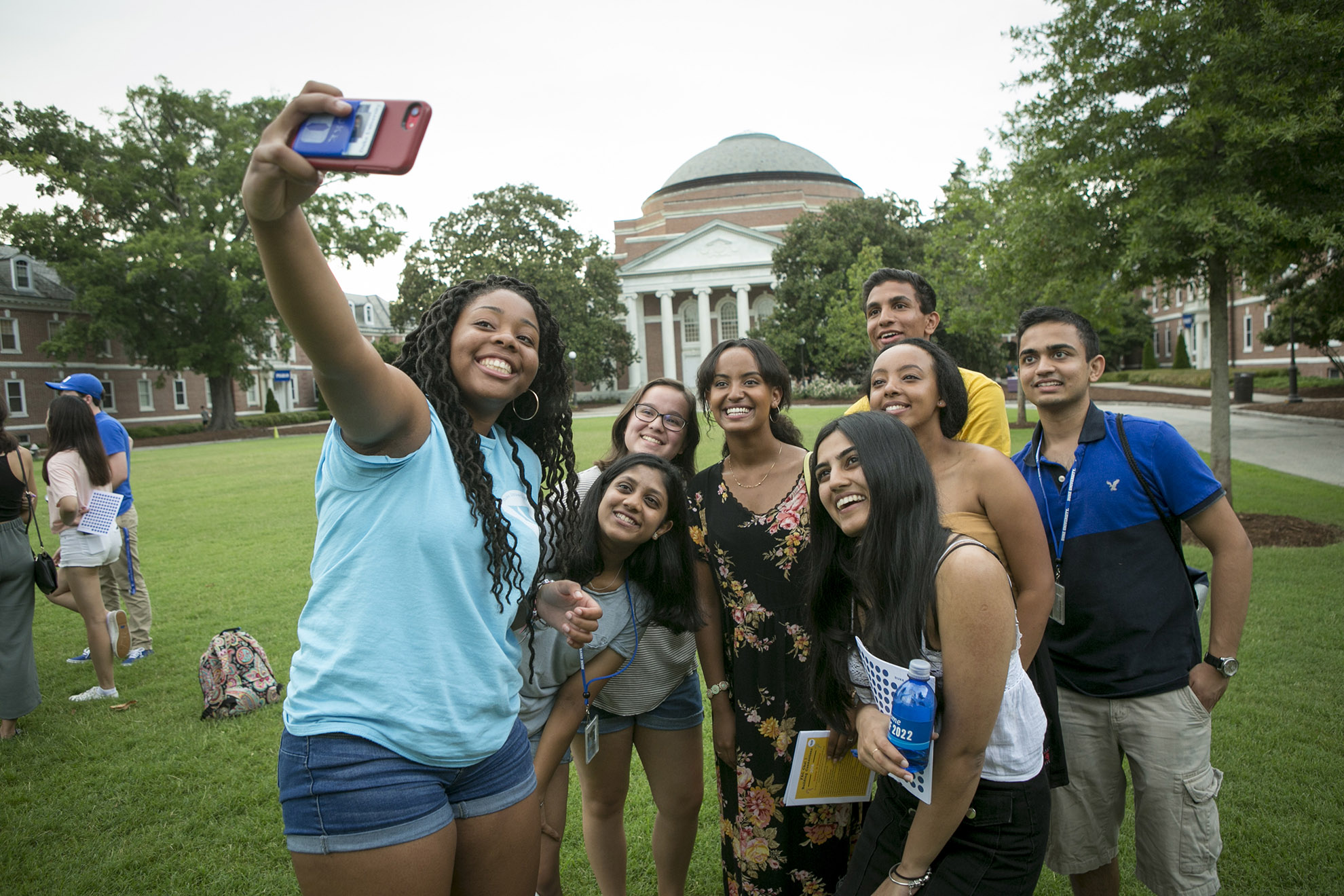 Taking an Uber to class, networking with classmates who already run their own start-ups, and Instagramming your spring break beach trip to Oman. This is the life of a Duke University student.

This is also the life of a Duke student: staying on campus during spring break because you can’t afford to fly home, skipping dinner out with friends because the restaurant doesn’t take food points, and reassuring your frantic mom that you’re not in trouble when she gets an email saying you made the dean’s list. (True story.)

To the casual observer on the quad, the divide isn’t obvious between students who come to Duke from backgrounds of wealth and privilege and those who are the first in their families to go to college. But when you get them talking, first-generation undergrads—many of whom refer to themselves as “1G”—speak candidly about how different the Duke experience can be, depending on which side of the divide you come from.

Growing up in the western North Carolina town of Lenoir, Tiffany de Guzman had always heard about Duke. But she never imagined she would get in. Only one person from her high school had ever attended Duke. Almost everyone else entered the workforce after graduation, or else enrolled in community college.

But when a generous financial aid offer came through, the decision was easy. Tiffany was Durham-bound.

Now a senior double-majoring in Political Science and Italian, she is one of approximately 650 first-generation college students at Duke. Like many of them, she felt a little overwhelmed when she first arrived on campus. It’s a common feeling among college freshmen everywhere. But unlike many of their peers, students like Tiffany can’t always rely on family to help them navigate the myriad guidelines and financial challenges encountered in college.

“That’s one thing that’s different for a lot of 1G students,” Tiffany said. “Growing up, teachers were really important to me as a source of advice and guidance. So I came to Duke seeking that kind of support figure.”

Luckily she found one in Lee Sorensen. Based in Lilly Library, Lee is Duke’s librarian for Visual Studies and Dance, and he happened to be paired up with Tiffany as her pre-major advisor. When her initial plan to major in engineering turned out to be the wrong fit, Lee encouraged her to take classes she was interested in but might not have considered, which ultimately led to her double major.

“Lee was great,” Tiffany said. “It made it less overwhelming to know someone in the Libraries and have him as my advisor. We still stay in touch. I actually have a closer relationship with Lee than I do with my major advisor.”

Tiffany’s case isn’t unusual. One of the biggest differences between first-generation students and their peers isn’t necessarily material wealth, but information capital. Duke isn’t an open book, and it’s not always clear where to go for help. Early experiences with supportive upperclassmen, faculty, or staff can be key lifelines for gaining information and learning how to succeed in a demanding academic environment.

During the past year, the Duke University Libraries have been exploring ways to provide more support for 1G students at Duke. Some of the strategies library staff have identified or implemented are simple adjustments that require nothing more than a healthy dose of perspective. Others involve budgetary resources or calls for philanthropic support.

Perhaps the most surprising thing we’ve discovered in the process is this: many 1G challenges are common student challenges. In other words, services aimed at helping first-generation students actually promise to help all Duke students succeed. So why not do it?

With its need-blind admissions policy, Duke has made it a priority to attract students from all socio-economic backgrounds. And by almost any measure, the university’s recruitment efforts have succeeded.

According to Duke’s Office of Access and Equity, which serves first-generation and low-income students on campus, 1G students now comprise approximately 10 percent of the total undergraduate population. That translates to roughly 170 students in each class. Of those, about 20 percent of 1G students (60 incoming freshmen) are offered admission to the prestigious Rubenstein Scholars, a merit-based program created in 2016 that offers a full scholarship and additional funding for services, such as parental visits. The university also partners with KIPP, Questbridge, the American Talent Initiative, and other organizations that connect high-achieving, low-income students with selective universities. In recent years, the university has invested heavily in building an ecosystem of supportive offices and people across campus to help familiarize 1G students with college life. 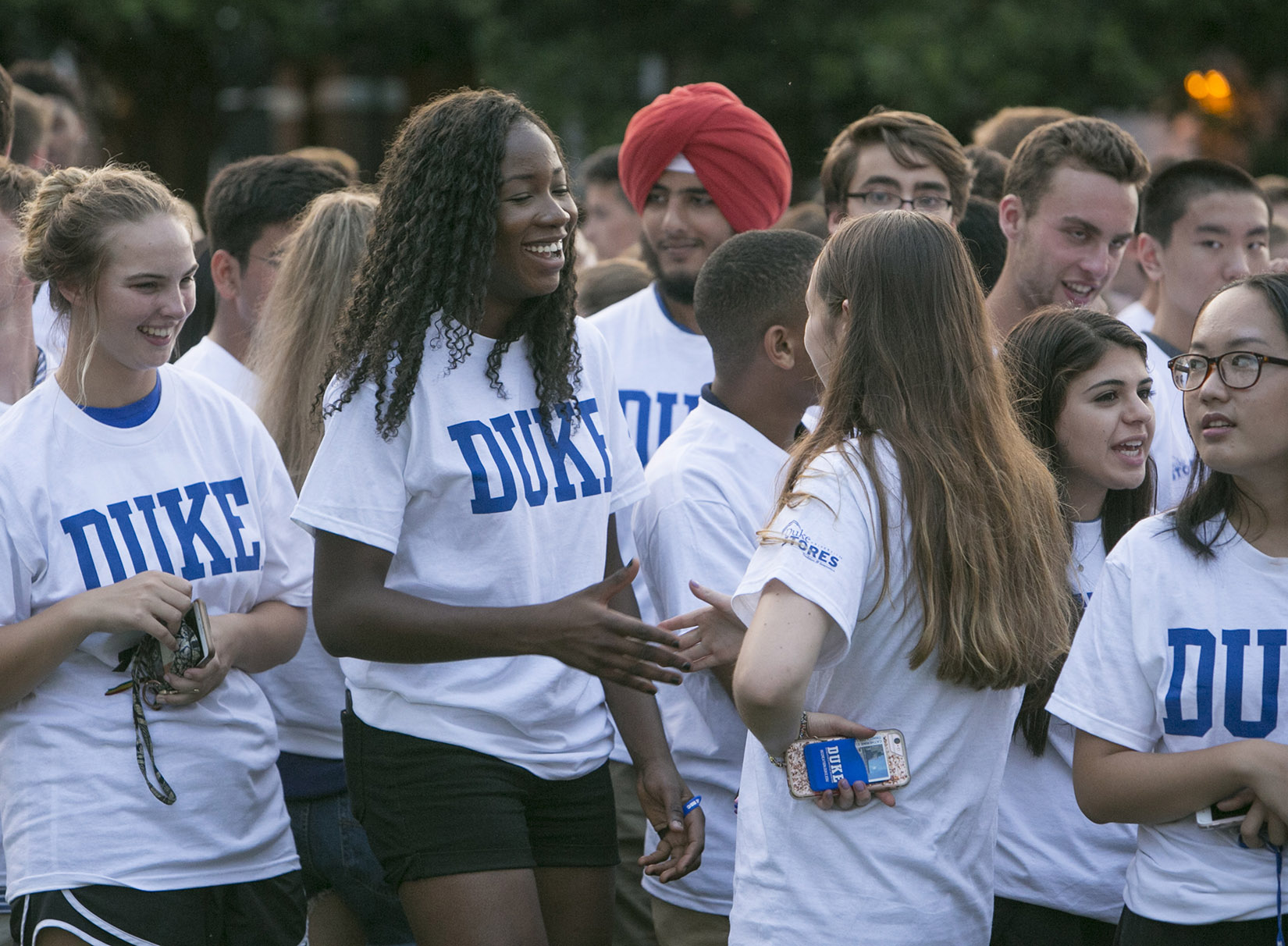 The Libraries are a vital part of that support system. Recently, a team of library staff conducted six focus groups with 1G students to better understand the unique challenges they face. The interviews were revealing. Did the students ever feel like people around them knew things about college that they didn’t? The question was met with knowing smiles, nods, and cathartic laughter.

“Was there an info session I missed?” one student said she often felt like asking. “Have you been told your whole life you have to do this?”

Another sore spot was the cost of textbooks. When a night out with friends feels like a splurge, a single engineering text that costs $300 can be a major source of stress, on top of the financial anxiety many 1G students already feel.

One student joked, “I’ve never researched so hard as when I’m looking for a digital version of a textbook.”

For Arianne Hartsell-Gundy, Librarian for Literature and Theater Studies, comments like these hit home. She was a first-generation college student herself. She can identify with the feeling of being an “outsider” on campus, and how hard it can be to overcome the academic, social, economic, and cultural barriers that many 1G students face.

“That’s the way I often felt as an undergrad,” said Arianne. “There’s a big information gap.” Arianne grew up in Missouri and attended the University of Missouri on scholarship. She made the most of it, and she appreciates the opportunities she had. But she almost missed out on one of the most memorable experiences of her life—studying abroad in France—until an advisor casually informed her that her scholarship would cover the cost.

Now Arianne leads a cross-departmental team of library staff working to expand services for 1G students. The team collaborated with the Libraries’ Assessment and User Experience department to conduct an in-depth study on ways the Libraries could improve the learning experience of these students.

Their findings revealed several areas of low-hanging fruit. Take textbooks, for example. Two years ago, the Libraries piloted a program to purchase textbooks for the hundred largest classes at Duke and let students check them out for a few hours at a time. The service proved hugely popular. In the 2017-2018 academic year, the Libraries purchased 290 textbooks, which were checked out some 2,597 times. This year, at the recommendation of Arianne and her team, the service was expanded and promoted heavily. Checkouts are already exceeding last year’s pace, and the year isn’t even over. The service benefits all students in those high-enrollment classes, but especially first-generation and low-income students.

Another finding was that many 1G students arrive at Duke without any experience of using an academic library, let alone a system as large and complex as Duke’s. Even fundamental research skills like locating a book in the stacks can take time to puzzle out if you’ve never been introduced to the Library of Congress classification system. 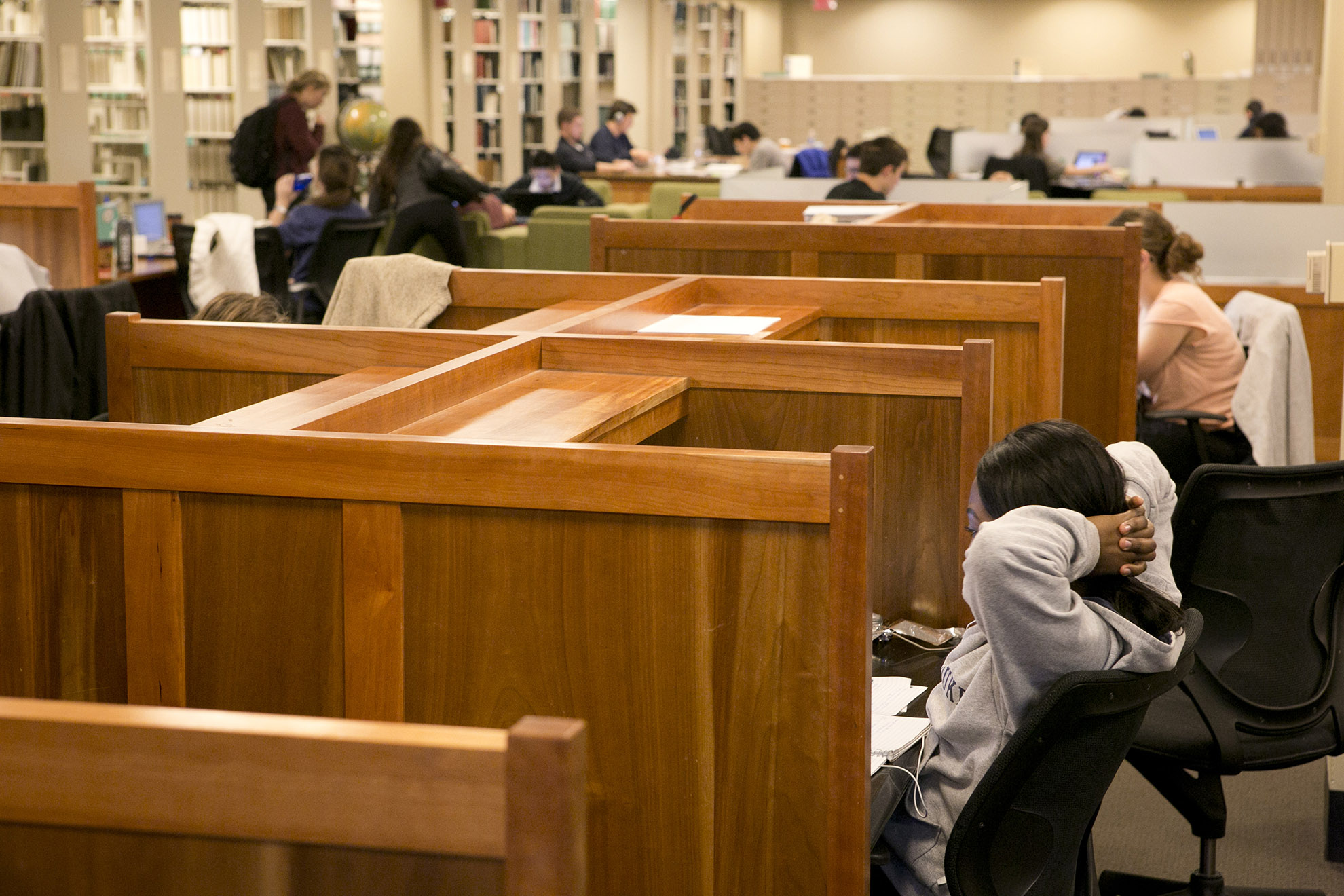 Such difficulties are certainly not limited to 1G students. Many international students at Duke—who make up almost 20 percent of the combined graduate and undergraduate student population—also face difficulties learning their way around the library.

In response, the 1G library team encouraged staff and students who work at library service desks not to assume that individuals know how to read a call number and to consider accompanying library users to the stacks as a matter of course, rather than waiting to be asked. Such a small change of perspective and employee training can make a big difference to the entire student body, not just 1G students.

Other ideas and recommendations the team came up with—several of which have already been implemented—include participating in Duke’s pre-orientation sessions for 1G students, recruiting 1G students to serve on the Libraries’ student advisory boards, advertising library jobs on Duke’s 1G student listserv, and collaborating with campus partners like the Academic Advising Center, Career Center, Writing Studio, and others to promote library resources to 1G students. 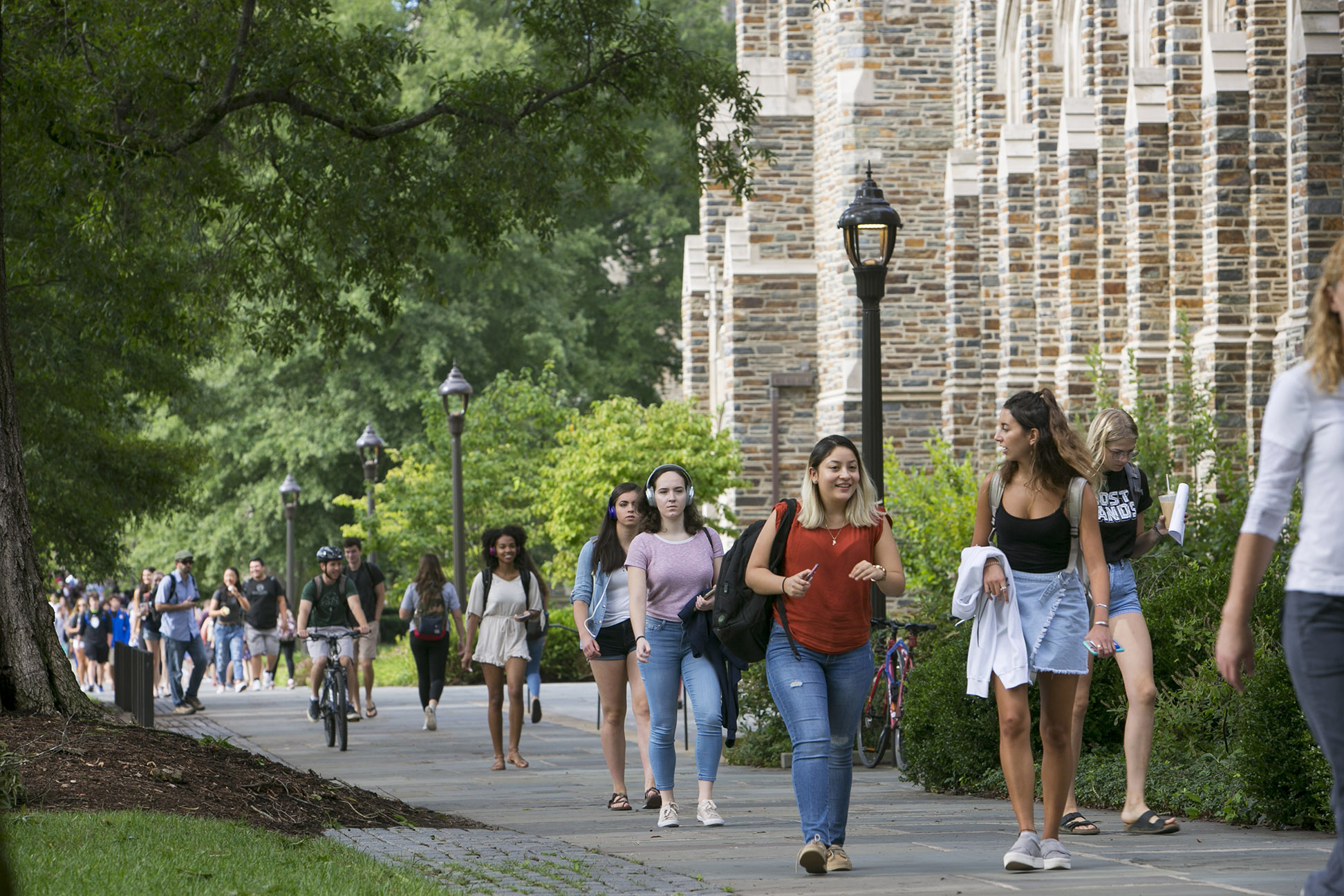 One of the top recommendations coming out of the Libraries’ 1G study was to create a dedicated position that would focus on providing outreach not only to Duke’s growing number of 1G students but also to other underrepresented groups, such as international students. This spring, thanks to a generous gift from library supporter Deborah Spears (G’87), the Libraries hired our first Student Success Intern. Megan Boland is a graduate student in UNC-Chapel Hill’s School of Information and Library Science. Under Arianne’s supervision, Megan has been working to build connections, develop programs, and promote the Libraries as both an academic and a non-academic partner in support of student success.

“I truly believe that first-generation students bring important perspectives to higher education, and that libraries can play a unique role in facilitating their acclimation to college,” said Megan. “Collaboration between staff, faculty, students, and other key stakeholders is essential in creating a welcoming and inclusive environment.”

During Duke’s spring break, Megan helped to plan a “Spring Tea Break” for students who were staying on campus to gather in a relaxing and helpful environment. She also conducted a focus group with the leadership of Duke LIFE, a student group for 1G and low-income Duke students, on how to design campus spaces especially for first-generation students.

The intern position is funded for two years. An additional recent donation by library supporter Maria Tassopoulos (T’89) will supplement 1G outreach efforts and may be used to increase awareness of textbook affordability issues. Generous gifts like these increase the Libraries’ ability to improve the academic experiences of 1G students, which has a positive effect on improving student success in general.

It should go without saying that there are benefits to attending a private university with an $8.5 billion endowment. Gleaming new residence halls, access to phenomenal faculty, smaller classes, a veritable buffet of dining options, and of course awe-inspiring libraries are just the tip of the iceberg.

And yet for all its abundance, the rarefied environment of a place like Duke can undermine first-generation and underrepresented students’ sense that they belong here. Like it or not, Duke remains a place of pervasive wealth, where money and status are a part of daily life. In this respect, the university is no different from its peers. Wealthy students are a fixture at elite colleges across the country, and the challenges at Duke are similar to issues faced by students at many top private universities.

But research shows that a sense of belonging really matters, influencing students’ academic as well as social experience of college. Many low-income and first-generation students today embrace their identities. As a result, the conversation—at Duke, as throughout the world of higher education—has shifted from one that expects those students to assimilate to one that listens to them and uses their insights to create a better educational environment for everyone.

When students from less-advantaged backgrounds aren’t worrying about fitting in or affording textbooks for their classes, they can spend more time taking advantage of everything a Duke education has to offer. And so can the next generation after them.