Catching Up with Our Research and Writing Prize Winners

Every year we run a series of essay contests recognizing the original research and writing of Duke students and encouraging the use of library resources. These include the Aptman Prizes, for use of our general collections; the Middlesworth Awards, for use of our special collections and rare materials; the Holsti Prize, recognizing research in political science or public policy; and the Rosati Creative Writing Award. Winners of these awards receive impressive cash prizes of $1,000 or $1,500 as well as recognition at a reception during Duke’s Family Weekend.

We thought it would be fun to catch up with a few of this year’s winners and ask what they planned to do with their winnings. 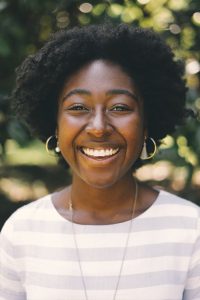 As a Robertson Scholar, Hanna had the opportunity to spend one semester of her undergraduate years at UNC as a full-fledged Duke student. Though her time at Duke may have been limited, the impact it had on shaping her work was anything but. An African American Studies major, Hanna is interested in religious history in black communities both in America and globally. Her paper, “Seeking Canaan: Marcus Garvey and the African American and South African Search for Freedom,” was so good it had the rare distinction of winning both an Aptman Prize and a Middlesworth Award.

Now it appears Hanna’s future writing career may take a different turn. When asked what she planned to do with her winnings, she responded, “Recently, I’ve decided I want to actively pursue performance poetry. However, that requires having a car. The money I won is going directly towards my car-fund, in the hopes I’ll be able to go on a travel tour of writing and performing my work.”

Hanna also has eyes on divinity school (Duke’s perhaps?) and hopes to continue her historical inquiries through exploration of primary research and materials.

Choosing to study Classical Languages, Greek Literature, and History at Duke may not be the popular path, but it proved to be interesting and rewarding for Gabi. Though she was the only Classical Languages major to graduate in the Class of 2018, she still thinks Duke was one of the best places to write and research her passion. 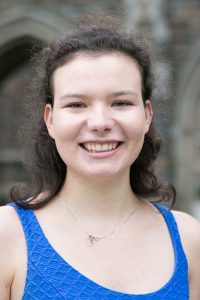 As a student, Gabi interned with the American Society of Papyrologists. As it happens, the ASP is headquartered at Duke, which is also home to countless papyrus materials in the Rubenstein Library. Gabi attributes the line of inquiry that inspired her paper—“Rostovtzeff and the Yale Diaspora: How Personalities and Communities Influenced the Development of North American Papyrology”—to her relationship with ASP and the ease to which she could access rare materials.

As Gabi delves into the next chapter of her studies at Oxford University as a Rhodes Scholar, she remarks that she hasn’t yet had the opportunity to travel as much as she’d like.

“I’m planning to use the prize money from the Middlesworth to take one of my first trips abroad—to Paris!” she said. 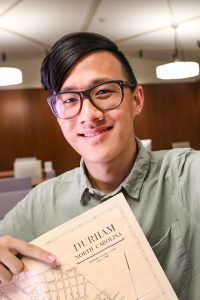 As a student of Global Cultural Studies and founder of the Duke Men’s Project, Andrew was accustomed to exploring and interrogating narratives in his environment while at Duke. Choosing to spend his summer as one of the first participants in our Duke History Revisited program—a six-week immersive research experience uncovering previously under-researched or unexplored areas of Duke history—Andrew was able to delve deep into the relationship between Duke and Durham through the lens of housing and gentrification.

Andrew’s research, culminating in “Neighbors: A Narrative and Visual History of Duke’s Influence on Durham’s Low-Income Housing,” was different than work he’d ever done. It gave him a sense of empowerment over his studies.

“It’s so gratifying to know that this research is read,” Andrew stated, “that it has a place in the scholarship of a subject I care deeply about and a city that means a great deal to me. I’m honored to receive the prize.”

Though his time at Duke has come to an end, Andrew continues his pursuit of uncovering knowledge. He is currently researching domestic labor in Hong Kong, and hopes to use the prize money to further his travels around the region.

Following your passions can often take you down roads you never expected. That’s the case for Alex, a recent graduate with a Gender, Sexuality, and Feminist Studies major, Environmental Science minor, and Latina/o Studies certificate. His unique combination of degrees was a result of his desire to understand people and how they interact within the world. 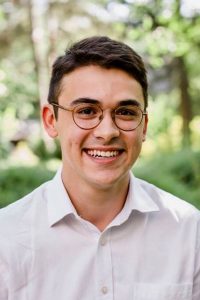 Alex’s creative writing piece, a series of vignettes titled “Reports from South Texas,” followed his interests and experiences. Inspired by his mother’s house in San Antonio, the piece reflects on the contradiction between sentimental memory and physical rot. In writing it, Alex found a way to hold onto a place that may be slipping away. He is grateful he didn’t have to undergo the process alone.

“Mentors are huge,” he said. “It’s hard to know when to slap someone in the face with critique and when to applaud. A mentor knows the right balance.”

Since graduation, Alex has remained at Duke as an Arts Administration Fellow. He imagines using the prize money to enjoy some local treats, such as buying the “nice” loaves of bread from the Durham Farmer’s Market and taking himself out on a couple of dates. 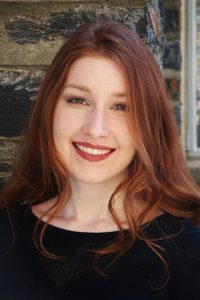 Some might know Valerie as the President of Duke Players, the student theater group supporting new work from the Duke community, or as an actress in campus productions. However, behind the curtain, Valerie is often responsible for the writing herself. A junior, Valerie unites her studies in English, Creative Writing, and Theater Studies to create her very own plays and even see them to production.

Her three-part collection of plays, “Ditch,” embodies Valerie’s interests in human miscommunication, loss, and the surreal and was a result of Valerie’s efforts over the span of a couple of different dramatic writing courses. Her writing hasn’t stopped there.

Valerie is currently working on a screenplay. Before she graduates, she hopes to write a full-length play and produce it for an audience. As every writer knows, it can be difficult to find the time and resources to devote yourself to your craft. Valerie hopes the prize money will give her the opportunity to spend her summer writing and exploring her passion.

Keegan Trofatter (T’19) is an English major and student worker in the Library Development and Communications department.

Chester P. Middlesworth Award
Recognizing excellence of analysis, research, and writing in the use of primary sources and rare materials held by the David M. Rubenstein Rare Book & Manuscript Library