A longtime library mainstay steps down 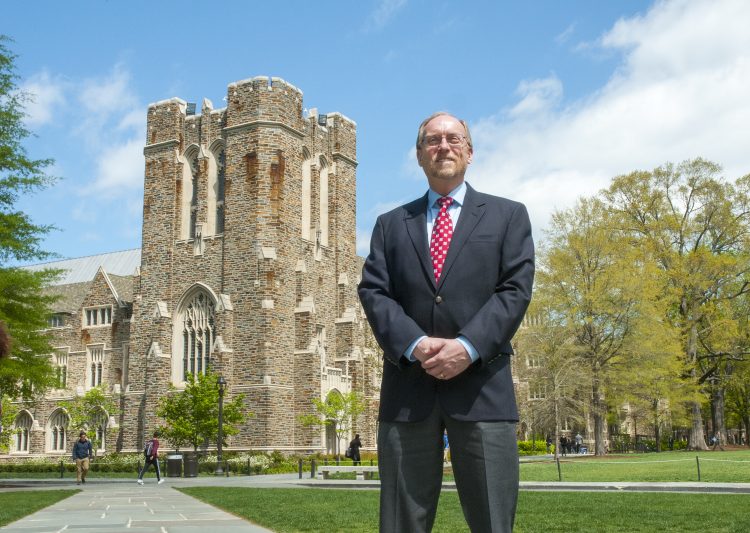 Farewells are never easy, even if they’re of the fond variety.

This May, a good friend and colleague of mine, Robert L. Byrd, Associate University Librarian for Collections and User Services, retired from Duke after forty years of dedicated service.

Bob announced his intention to retire last November. For many of us who have long relied on his wisdom, diplomacy, and ability to get things done, it has taken a while to get used to the idea that he won’t be here anymore.

An account of Bob’s contributions to the Duke University Libraries, and to the university, would go on for pages. Most notably, he has been the force of quiet persistence behind our special collections.

It was Bob’s vision, beginning decades ago, that ultimately led to the creation of the David M. Rubenstein Rare Book & Manuscript Library. He always believed that Duke deserved a named special collections library, in recognition of our broad and deep research collections, engaging programs, and strong, effective services to scholars. That vision finally became a reality in 2015, when Duke formally dedicated the Rubenstein Library, bringing the university into the company of its peers.

It turns out that Bob’s fingerprints are on just about everything in the Rubenstein Library. He assiduously acquired and curated some of our most noteworthy and distinctive collections, always seeking to build strengths that reflected the interests of Duke faculty. For example, working with Roy Weintraub from the Department of Economics, he built the Economists’ Papers Archive. In collaboration with Mack O’Barr from Cultural Anthropology, he established the Hartman Center for Sales Advertising & Marketing History. With John Hope Franklin, he launched the John Hope Franklin Research Center for African and African American History and Culture. With Sallie Bingham and Jean O’Barr, he established the Sallie Bingham Center for Women’s History and Culture. He worked with Alex Harris to start the Archive of Documentary Arts. He founded the Human Rights Archive. And he worked for many years to build our southern historical archives, as well as the literary archives of southern writers like Reynolds Price, William Styron, and Anne Tyler.

Bob has also contributed much beyond the Libraries, serving on numerous university committees, focusing, for example, on Duke’s reaccreditation process as well as the launch of Duke Kunshan University. He also worked closely with the architects of the Perkins Project, the fifteen-year-long effort that saw the renovation of Perkins and Rubenstein Libraries and the construction of Bostock Library and the von der Heyden Pavilion.

There is another side of Bob that anyone who gets to know him will discover. He is a deeply spiritual person who believes that a vibrant faith goes hand-in-hand with a rich and deep life of the mind. He was instrumental in founding two local educational institutions that, like Duke, combine Christian tradition and academic excellence: the Trinity School of Durham and Chapel Hill, and the Center for Christianity and Scholarship. In recognition of the years he has spent devoting his time, energies, and considerable gifts to bringing these twin passions—faith and education—together, Duke recently recognized Bob with the Algernon Sydney Sullivan Award. The annual award recognizes one graduating senior and one Duke employee who exhibit the qualities of selflessness, generosity of service, nobility of character, integrity, and depth of spirituality. It is hard to think of a more worthy honoree.

Over the last few months, we have been searching for a way to salute Bob’s lasting impact on the Libraries and Duke in a unique and appropriate way. I’m happy to say that we found it.

It seems only appropriate that the position of Director of the Rubenstein Library should be named for Bob. Thanks to the generosity of many of our Library Advisory Board members and numerous other friends, this spring we created an endowment fund in his honor. Through the Robert L. Byrd Endowment, Bob and his legacy will be associated in perpetuity with the David M. Rubenstein Rare Book & Manuscript Library. It is an acknowledgment of his vision and long dedication to this institution. You could also say it’s a way for us to keep him around—in spirit, if not in person—and continue to benefit from his company.

Be Part of the Recognition

If you would like to contribute to the Robert L. Byrd Endowment in honor of Bob’s lasting impact on the Libraries, please consider joining us. Gifts of any size are welcome, and pledges can be paid over five years. For more information, contact Tom Hadzor, Associate University Librarian for Development, at t.hadzor@duke.edu or 919-660-5940.