On February 27, 2010, a massive, 8.8-magnitude earthquake rocked Chile. It lasted a very long 90 seconds, and although it occurred off the coast of the Maule region, south of the capital Santiago, the quake was felt strongly across six regions of the country. Tremors were reported as far north as Ica in southern Peru and in several cities across the Andes in Argentina. Tsunami warnings were issued in dozens of countries, and giant waves devastated several Chilean coastal towns. It was the strongest earthquake in Chile since the 9.5-magnitude temblor that shook Valdivia in 1960, and it was estimated to be several hundred times more forceful than the 7.0 earthquake that devastated Haiti in January 2010. Over a hundred aftershocks, many of a magnitude greater than 6, struck the country in the months that followed. Damage estimates exceeded $100 billion.

Miraculously, although still tragically, the quake took only 521 lives, remarkably low for an event of such force and scope. Chile lies on a fault zone and earthquakes are not uncommon or unexpected. Indeed, Chilean building codes and construction methods were partly responsible for the low loss of life. Still, many people suffered injuries, and damage to buildings was widespread, including hospitals, museums, Santiago’s international airport, universities, and libraries.

On June 7, 100 days after the earthquake, I was in Chile with a delegation to assess the damage to universities and their libraries. Although many of Chile’s 59 universities suffered some degree of damage, estimated at $100 million, our charge was to focus on the four located nearest the epicenter: the Universidad de Concepción, the Universidad del Bío-Bío, the Universidad de Talca, and the Universidad Católica del Maule. Our delegation, which was sponsored by the U.S. State Department and the American Council on Education, consisted of nine members, representing a wide variety of higher education expertise including libraries, nursing, energy, engineering, computing infrastructure, and forestry. Our skills and experiences were very complementary and we learned a great deal from each other during our intensive four-day visit.

Santiago was our home base. On our first day, we met with the U.S. ambassador to Chile, representatives of higher education organizations and the Council of Rectors of Chilean Universities, and we were briefed on the earthquake by the director of the Chilean Seismological Service. On day two, we flew to Concepción (about 200 miles south of Santiago) and visited the Center for Oceanographic Research in Dichato. What had been a lovely seaside town with houses, restaurants, and a research facility was nearly completely razed by a series of four tsunamis in the wake of the earthquake. Eighty percent of the town was destroyed. Houses had been dragged out to sea by the force of the waves, and boats were thrown about as if they were toys, many landing incongruously high up on dry land. 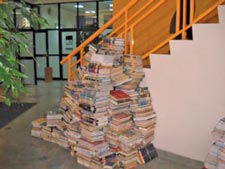 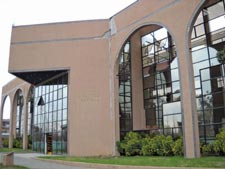 At the Universidad de Concepción itself, the library did not suffer significant damages. But the Chemistry building was gutted by a fire when the quake caused volatile lab chemicals to ignite. Our hosts in Dichato and Concepción arranged meetings with groups of faculty and administrators, as well as tours, so we could see for ourselves the extent of the damage. At the Universidad del Bío-Bío, we witnessed the structural impact on several campus buildings. But the main effect on the library at Bío-Bío was indirect: money set aside for new furniture and shelving had to be diverted to other, more immediate uses instead.

The situation was worse at the Universidad de Talca and the Universidad Católica del Maule. The libraries at both institutions, along with other academic buildings, suffered extensive damages and remain closed for an indeterminate period. The collections have largely been put into storage or transferred to temporary quarters, leaving faculty and students with woefully inadequate access to the resources they need for their teaching and learning. Talca’s striking library building of glass and brick is now a shell with many broken windows and a view of the sky from inside. In both cases, rebuilding must await adequate funding, and the libraries will be queued up with classroom needs and other campus reconstruction. 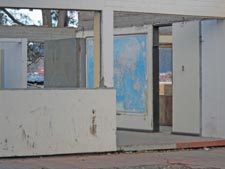 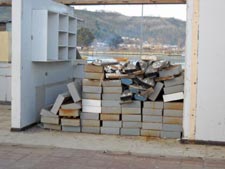 How can we help? The most immediate need at these universities is access to e-journals and e-books. Duke’s librarians—including Nancy Gibbs, the head of Acquisitions, and Holly Ackerman, librarian for Latin America and Iberia—have talked with publishers and vendors to try to convince them to provide the affected Chilean universities with free access to e-books and e-journals. I have been looking into establishing short-term library staff exchanges between members of the Triangle Research Libraries Network (Duke, UNC-Chapel Hill, NC State, and NC Central) and partner libraries in Chile, as well as possible visits from the directors of the four libraries I visited. Holly has made strong petitions for assistance to the Seminar on the Acquisition of Latin American Library Materials and the Latin American Studies Association. And we have been coordinating our efforts with those of the American Library Association.

Looking back on that post-earthquake visit to Chile, I was most impressed by the resilience and optimism of the Chileans. A huge earthquake had killed or injured many people, crumpled buildings, closed the airport, cut off highways, disrupted the work of the universities and the schooling of thousands of children. And yet the country was focused not on the tragedy, but on rebuilding. Similarly, the recent crisis of the trapped Chilean miners, a lengthy and agonizing ordeal, has demonstrated to the world that same determination and positive attitude, even in the face of devastation and uncertainty. It is one of many reasons why I will be going back.

Members of the United States Higher Education Delegation
to Chile