By almost any definition, Phillis Wheatley’s Poems on Various Subjects, Religious and Moral is an important book. Published in 1773, it is the first book authored by an African American—not to mention the first by a slave and only the third by an American woman. Duke University owns a precious first edition signed by the author herself. 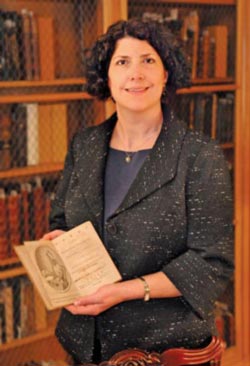 On a recent afternoon, Naomi Nelson was explaining why this particular autographed copy is not only special, but truly one-of-a-kind. Nelson is the new director of Duke’s Rare Book, Manuscript, and Special Collections Library—or RBMSCL for short. Her job is to oversee a trove of rare and unique scholarly treasures, from two-thousand-year-old papyri to digital files created yesterday, the primary stuff of research. It’s a big job, but one that comes with frequent rewarding surprises, like getting to hold a fragile connection to history in your own hands.

Nelson pointed out that Wheatley wasn’t the only person who signed this copy. The first few pages bear the inscriptions and bookplates of several previous owners, conveniently preserving a record of the volume’s journey through time. According to an inscription, the poet herself gave this volume to Mary Shubrick Eveleigh, a wealthy Charlestonian who later married Edward Rutledge (the youngest signer of the Declaration of Independence, member of the first and second Continental Congresses, and Governor of South Carolina). From Rutledge’s library, the book then goes to Charles Cotesworth Pinckney, who was Rutledge’s law partner, a signer of the Constitution, and twice candidate for president. Finally, in the early twentieth century, it comes to Duke after a number of books from Pinckney’s library, including this one, were put up for sale.

The inscriptions and bookplates in Duke’s copy of Wheatley’s Poems make it clear that her work was known among some of the most prominent families of the slaveholding South. “It’s a wonderful example of how a particular copy of something can be significant,” said Nelson. “There may be several digitized versions of Phillis Wheatley’s Poems out there. But there’s only one copy like this, only one that tells this story. And only we have it.”

The story the book tells is not just a story about African American literature. It is also, in some ways, a story about the RBMSCL itself. “It’s emblematic of where we’ve been as a library, and where we’re going,” Nelson said.

For many years, Duke has attracted scholars to its strong and extensive library holdings in American literature and southern history. But over the last few decades, the RBMSCL’s collection strengths have broadened to include several new and related areas. These are embodied by the various research centers and archives within the RBMSCL, including the Sallie Bingham Center for Women’s History and Culture; the John Hope Franklin Research Center, dedicated to African American history and thought; and the Archive for Human Rights.

Wheatley’s book of poems could easily fall into any one of these categories, Nelson explained. It has something to say about American literature, southern history, women’s culture, African American thought, and human rights, encompassing all of these themes and more. In this way, it exemplifies the very idea of interdisciplinary inquiry—much like the RBMSCL itself.

Naomi Nelson believes that studying the past opens our eyes to new possibilities in the future. She learned that as history major here at Duke. Originally from Delaware, she migrated south for college after she was struck by the beauty and vitality of Duke’s campus. “Duke’s focus was on the future. From the laboratory to the library to the stadium, everyone was striving for excellence,” she said. “It was a place where things were happening. After my first visit, I knew this was where I wanted to be.” Faculty in the history and women’s studies departments introduced her to new ways of seeing the past and present. She remembers being particularly inspired by professors Tom Robisheaux, Jean O’Barr, Bill Chafe, Elizabeth Clark, and Sydney Nathans.

Naturally, she spent a lot of time in the library back then, too. In fact, it was because of an experience at Duke that Nelson became interested in libraries as a career. After a semester researching southern history in special collections for a class paper, she volunteered to work in the University Archives, because “I wanted to learn more about the stories carefully preserved in all those boxes.” Later, a few years out of school and working in finance for General Electric, those stimulating days in the archives came back to her.

One day she called University Archivist Bill King, for whom she had worked as a Duke student, and asked him, “How does one become an archivist?” King referred her to a colleague at Emory, who advised her to get a graduate degree in either history or library science. So Nelson got both, picking up a library degree from the University of Pittsburgh and a Ph.D. in history from Emory.

While at Emory, she went to work for the Manuscript, Archives, and Rare Book Library. There she spent the next 19 years and held a range of positions. She was originally hired to curate the papers of U.S. Senator Sam Nunn. Later she became the Library’s first digital archivist, then curator of southern history, then head of Research Services, then associate director, and finally interim director, a position she held before coming to Duke.

Now that Nelson has returned to her alma mater, she is excited to be a part of a pivotal moment in RBMSCL’s history. “Information technology has changed the way that we work and live. Students and researchers expect remote access and want to collaborate in virtual spaces. We are working to provide robust digital access to materials spanning eleven centuries of recorded history. At the same time, we are grappling with how best to document this electronic age of email, Facebook, and the cloud. We will continue to be experts in preserving the printed word, but we will also become experts in preserving bits and bytes.”

Nelson is also energized by RMBSCL’s special character. Duke’s special collections were founded by Trinity College faculty 1890s to support undergraduate research. That educational mission continues today, with over 100 classes using the collections each year. The materials challenge student assumptions, raise new questions, and provide an opportunity for students to discover something no one else had noticed.

One of Nelson’s goals is for every Duke student to leave the university with a memory of having seen or learned something extraordinary in the RBMSCL. Whether it’s a Greek manuscript from the first millennium, a variant edition of Walt Whitman’s Leaves of Grass, the first issue of Superman, a selection of feminist zines, records from Marshall Meyer’s work with political prisoners in Argentina, or films from the Full Frame Documentary Film Festival, there is something here to inspire everyone.

“People at Duke are proud of this university for a number of reasons—its gothic architecture, its hospital, its basketball team. RBMSCL is another of Duke’s treasures,” Nelson said. “We want people to feel proud of this library, and to think about us when they think about Duke.”

In a few years, they may have even more to be proud of. The part of Perkins Library that houses the RBMSCL is slated to be completely renovated, completing a multi-year library renovation project that began with the construction of Bostock Library and the von der Heyden Pavilion five years ago. The completion of the “Cornerstone Phase” of the Perkins Project—so called because the cornerstone of the University appears on the façade of the 1928 library building—will transform the research, instruction, storage, and exhibition capabilities of the RBMSCL. The planned upgrades will be dramatic, but they are also badly needed.

“The difference between the library of 1928 and the library of today is dramatic,” said Nelson. “This building hasn’t had a major renovation in a long time. It wasn’t really designed for the kind of research students and scholars do today. Nor was it set up to properly care for the variety of media we now collect. The renovation will allow us to have an appropriately controlled environment for our collections. It will also provide more instructional space, better environments for exhibitions and programs, and more support for technology.”All of which means that Phillis Wheatley’s Poems will get a new home, one that will insure that future generations of undergraduates will be able to explore the stories that it tells.

When she’s not engaged in the tangible world of traditional special collections, Naomi Nelson is working with colleagues around the world to develop strategies to preserve and share the seemingly intangible digital world.

“What fascinates me,” said Nelson, “is that born-digital files are not fixed in the way a printed page is. The file we see is the result of the interaction of the hardware, operating system, software and file type used to render it. Changing any one of those elements can change what we see.”

Such changes might be small, such as substituting one font for another, or quite dramatic, such as eliminating interactive features. “Born-digital records demand that we determine which characteristics are the most important for a given set of records so that we make sure that those essential characteristics are preserved,” Nelson said.

This is a pressing issue in the library world. According to Nelson, where once the printed page was the authoritative record, now we increasingly view the digital file as the “real thing.”

“How many of us print our vacation photos anymore?” she asked. “Or print all of the emails we think are important? It’s much easier to keep our records organized in digital format, whether in a directory structure or using a service like Snapfish. And it’s so much simpler to share our information through digital means.”

Contemporary collections of “papers” often include disks, CDs, tapes, and sometimes entire computers along with more traditional papers, letters, and physical artifacts. Increasingly, many authors don’t write anything by hand anymore. They type, save, and (alas!) delete. What’s an archivist to do?

That’s a question Nelson is trying to answer. This summer, she co-taught a class on “Born-Digital Materials: Theory and Practice” at the University of Virginia’s Rare Book School, an independent institute that offers classes on the history of books and printing. Her co-teacher was Matthew Kirschenbaum, associate professor of English at the University of Maryland and associate director of the Maryland Institute for Technology in the Humanities.

Although libraries have long managed collections containing diverse formats, digital records add some new wrinkles. For example, how do we define “the original” for identical files that exist in multiple locations? Should archivists recover deleted files or crack passwords? And who should archive the web? “These are the questions we grapple with,” Nelson explained. “Our digital files are part of our cultural heritage, too, and we need to find a systematic way of dealing with them, just as we’ve developed systems for dealing with books, manuscripts, photographs, and other media.”

This cutting-edge research is being applied here at Duke. “A few institutions are leading the way in this area,” said Nelson. “We have the potential to be one of them.”

Aaron Welborn is the director of communications for Duke University Libraries